Berlin volunteers hand out 6,000 kippahs at public parks in solidarity with Jews 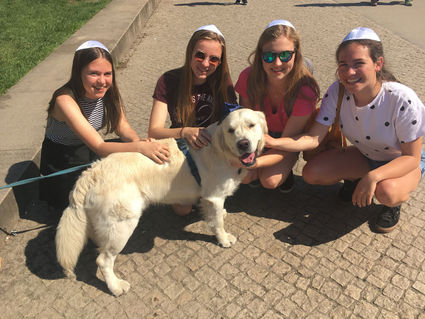 Belgian tourists posing in yarmulkes with Pete the dog in the Monbijou Park in Berlin, April 29, 2018.

BERLIN (JTA)-In an unusual sight, the people lazing about or strolling down the paths in several parks here on a sun-drenched Sunday were wearing gleaming white kippahs.

Seventy volunteers handed out some 6,000 of the satin yarmulkes in total at five parks in the German capital to counter a recent anti-Semitic incident targeting a man wearing the Jewish head covering.

"It's always important to do something against anti-Semitism, and for the safety of our city in general," Anne, one of the organizers, told JTA. "But with the last incident, it clearly is not the job of Jews alone-all of us have to watch out for each other."

Initially, more parks were included in the plan. But Anne said the Berlin police advised the organizers not to carry out their action in the Kreuzberg and Neukoeln districts, as both areas have large Arab populations. Some of the recent anti-Semitic incidents here have been attributed to people of Arab background

The organizers of the kippot action, Jannik and Marco joined Anne, received support from the Berlin Jewish community, the Foundation Remembrance, Responsibility and Future, the Friedrich Ebert Foundation and the Amadeo-Antonio Foundation, as well as from private individuals. They asked that their last names not be used to avoid people trying to contact them at work; they can be contacted through their Facebook page.

The volunteers started handing out the yarmulkes early Sunday afternoon. Within an hour, the green lawns of Monbijou Park in the Mitte District were dotted with kippah wearers lounging on the grass, picnicking or otherwise enjoying the day.

Janin Viviane Ahnefeld, a German-Israeli attorney, took a break from work to hand out the free yarmulkes. She was accompanied by the best ice-breaker: her kippah-wearing golden retriever, Pete.

Ahnefeld said her best customers were "tourists from other countries."

"I had people from Denmark, France, Poland, Britain," she said. "And they were all very open, they wanted to join in and they gladly took a kippah."

And they posed for photos with Pete and Ahnefeld.

Locals tended to be more reluctant, she said.

"I had a conversation with one German guy who said, 'I am not religious, and don't want to have anything to do with it.' I told him it has nothing to do with whether you are religious or not, but he was not interested," Ahnefeld said.

Anne said she only had two negative reactions, "but they weren't bad. One person said 'no,' and another nearby said, 'Then I'll take it!'"

Some said they were not religious, but added, "I find what you are doing totally good."

The event follows a kippah "flash mob" and a rally last week that drew some 2,500 concerned Berliners to the doorstep of the Jewish community center in the former West Berlin. The recent increase in anti-Semitic incidents has been met by calls for tougher action against perpetrators.

On April 17, an attacker shouting "Jew!" in Arabic assaulted a non-Jewish man wearing a yarmulke on a Berlin street. The victim was an Israeli Arab who said he donned the kippah to test whether it had actually become dangerous to wear one in Germany.

Critics say the solidarity actions and even government promises are too little-and almost too late.

But these events get people to "come out of their bubble and talk about what is happening in our city," Anne said, and also can help people overcome fear of others and stereotypes.

On Sunday, she met with some Arab families in the park. In one case, Anne said, "Someone translated for me, and the father of the family said, 'Of course! We will do it with you.'"

She added: "Other Arab families reacted differently, but always respectful."

Though by far not all park-goers were wearing kippahs by the end of the day, there was a distinct impression of something unusual going on.

"One woman came over and asked if a Jewish festival was being celebrated today," said Anne, laughing. "It was a moment of normalcy" for yarmulkes in Berlin.