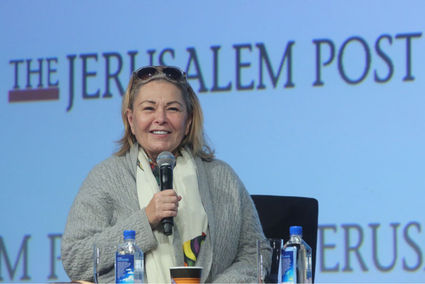 American actress and sitcom star Roseanne Barr, who says she would like to make aliyah to Israel one day.

(JNS)-Roseanne Barr, the Jewish-American actress who made a name for herself in comedy and on television, talked about wanting to move to Israel and potentially running for office there while at the annual Jerusalem Post Conference on Sunday in New York.

During a discussion on stage, the "Roseanne" star said: "I want to move to Israel and run for prime minister. In 2012, I said I was gonna run for president of the United States and prime minister of Israel, a twofer. But I do have that fantasy, [and] if God calls me, I'll go, of course.

"I want to make aliyah, I do, and before all the stuff is sold-all the real estate. I wanna get a nice house... I still have the fantasy of being an old Jewish lady living in the Jewish homeland. Someday, I will do it."

Then she asked the audience: "Is anyone here in real estate? I want to buy a farm there, maybe bring my family."

Barr also mentioned getting a phone call from U.S. President Donald Trump, who congratulated her on the successful reboot of her ABC sitcom, in which she plays the Trump-supporting matriarch of the Conner family. The show has been renewed for a second season.

The 65-year-old was in her hotel room waiting all day to hear from the president because she was told he would call. She noted that she "met him several times when he was just a civilian, or whatever you call it, not the president-just a show-business person, and he was always very nice to me... He said, 'Congratulations on the ratings,' cause he's really into ratings, like I am."

She then thanked the president for deciding to move the U.S. Embassy from Tel Aviv to Jerusalem.

"I said, Mr. President, on behalf of my mother, I want to thank you, and all the Jewish people too, for moving the embassy to Jerusalem. Thank you so much," Barr said she told Trump. She added that he replied, saying, "a lot of presidents have promised it, but I wanted to get it done."

Barr said she believes that moving the embassy is "the first step to peace in the world."

'We need to love each other'

She was ill on Sunday but still attended the conference, noting that she promised she would and "because it's a great chance to b**ch about how much I hate the BDS."

Barr was referring to the Boycott, Divestment and Sanctions movement that has proliferated on college campuses and elsewhere in the United States.

"I hate everything that's a lie based on anti-Semitism, and I'm a Jew," she said. "Jews who are against other Jews have always been a problem since the first story in Torah. So maybe this time, we can do something about it and change it. We need to love each other. Jews need to love each other, and it has to stop because it threatens our existence."

Barr, who has been to Israel three times, additionally reflected on the recent controversy surrounding actress Natalie Portman's decision not to attend the upcoming Genesis Prize awards ceremony in Jerusalem. She said she felt like Portman's position, which seemed to be based on a reluctance to be present with Israeli Prime Minister Benjamin Netanyahu because she disagrees with his policies, "wasn't the bravest way" to take a stance on something, and that it played into the hands of the BDS movement.

"I asked a lot of Israeli friends what they thought, and they said they wish she would have said it in Israel because Israel is a country where dissent is allowed," said Barr. "We have to be able to talk to the young people in America because they're way off; they're way out there. We have to figure out a way to reach them instead of turning them off. I happen to think that Judaism is the way."

Barr said that if she was to speak with Portman (one Jewish actress to another), "first, I would make her a lovely meal-that always starts everything peaceful-and then I would talk to her about Jewish history and Torah. I think those are the things that bring people back and wake people up."

During her time on stage, Barr discussed her love of studying Torah and how being a Jew is "really fun." She also mentioned growing up as the oldest daughter in an Orthodox Jewish home and her skills cooking "good Jewish food."

In fact, she said, she "always" thinks about doing a cooking show-and who knows? It could very well be filmed in Israel.