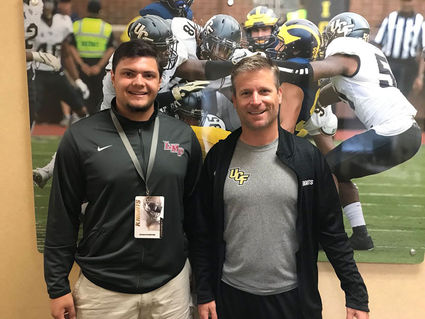 Evan Dvorchik, son of Keith and Alison Dvorchik, has committed to the University of Central Florida's Knights football team as a long snapper center.

In January 2017, Heritage ran an article about Dvorchik being named a top performer at the Rubio Long Snapping Camp in Georgia. Dvorchik was a junior in high school.

His trainer, Chris Rubio, stated at that time that Evan was "snapping with a ton of confidence as his ball hits under .77 consistently."

A long snapper is not a large alligator. The term refers to a football center who can snap the football over a long distance, typically around 15 yards during punts, and 7–8 yards during field goals and extra point attempts.

Not only are Dvorchik's standings as a long snapper superior, so are his academic rankings: He is 33rd in his class at Lake Mary Prep; has a GPA of 4.2; and an SAT/ACT score of 1400.

In a tweet, Dvorchik wrote, "First of all, I want to thank my parents for their constant support and helping me along every step of this journey. I'd also like to thank all the coaches that have helped me get to this point, especially Coach Eli, Coach Elvig and Coach Carter. I also want to thank Chris Rubio, I wouldn't be where I am today without you. Thank you to all my amazing teammates and anybody else who has helped me along the way. With that being said, I'd like to announce my commitment to further my academic and athletic career at the University of Central Florida!"

Don't be surprised to find one day Dvorchik's name listed with wide receiver Julian Edelman or quarterback Jay Fiedler or offensive tackle/guard Kyle Kosier-all three of whom are on the list of 10 greatest Jewish football players according to the American Jewish Historical Society.