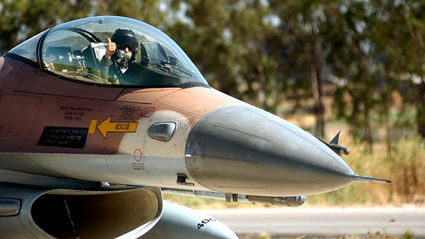 An Israeli army pilot sits in a cokpit of an F-16 aircraft.

Overnight on Wednesday, Iran lobbed 20 Grad and Fajr-5 rockets into Israel from the suburbs of Damascus. Four of the rockets were neutralized by the Iron Dome missile-defense system, with the other 16 landing in Syrian territory.

The Israel Defense Forces reported that it had set back Iranian military capabilities in Syria by "many months," smashing more than 50 targets in what IDF Spokesperson Brig.-Gen. Ronen Manelis called "one of the greatest operations of the Israel Air Force in the past decade."

In Israel, red-alert warning sirens went off in some Israeli communities in the Golan. No injuries or damage were reported in Israel, and the IDF said all air-force personnel returned home safely. The Golan Regional Council ordered the schools and public-transportation systems to remain operational on Thursday.

Israeli Defense Minister Avigdor Lieberman said on Thursday morning at the Annual Herzliya Conference that "the Iranians tried to attack the sovereign territory of Israel. Not one Iranian rocket landed in the State of Israel. Nobody was hurt. Nothing was damaged. And we're to be thankful for that."

Lieberman added that the IDF had "damaged nearly all of the Iranian infrastructure in Syria" during the counterattack and warned Iran "if we get rain, you will get a flood." He said that while Israel would respond with "the strongest possible force" to Iranian attacks, the Jewish state also maintained an interest in keeping the confrontation limited.

Israel's Public Security Minister Gilad Erdan stated "we are not playing and we are not bluffing. We are determined to do whatever is necessary to defend Israel."

Knesset Speaker Yuli Edelstein posted on Twitter praising Israel for sending "a clear message to its enemies and Iran: The rules of the game have changed. We will not tolerate any threat against the security of our citizens."

Opposition leaders also showed solidarity with Wednesday-night's campaign. Yesh Atid leader Yair Lapid, affirmed "Israel will not tolerate Iranian attacks on our sovereign territory," adding that "the world must be united in the fight against terrorism and that means being united against #Iran and its terror proxies."

IDF Spokesman Manelis stated that Israel is "prepared for what happens next," and that "if the Syrians allow direct activity against Israel, they will pay a price." He also noted that Russia had been informed prior to the attack.

The escalation came on the heels of an announcement by U.S. President Donald Trump that America would be withdrawing from the 2015 Iran nuclear deal and reapplying sanctions, and less than two weeks after Israel destroyed the Iranian-manned T-4 air base outside Damascus.

The exchange marked the most serious direct altercation between Iranian and Israeli armies, and the most severe exchange between Syria and Israel since the 1973 Yom Kippur War.