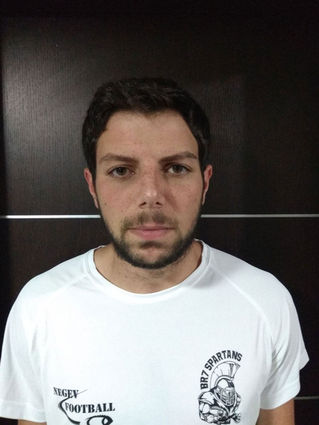 Robert Kraft, owner of the New England Patriots, and Andre Dobson, PE coach at Faith Christian Academy in east Orlando, have a lot in common. They both are passionate about football and love Israel. To be able to combine the two is the icing on the cake for both men. And they have their icing: Kraft sponsors the Israel Football League and built the only football stadium in Jerusalem, Israel, and Dobson is going to be training one of the League's coaches this summer. This is where Dobson needs the Jewish community's help-more on that later.

American tackle football has been growing internationally, and Israel is no exception to this love of the game. In 2005, the Israel Football League was founded by Israelis who wanted to play tackle football. So enthused were the small group of players-with team names like the Jaffa Sabres, the Jerusalem Kings and Judean Rebels-it did not matter to them that they played without pads or a governing body. But they had an American "angel" watching over them. Kraft saw the opportunity to combine his two loves, and he and his family sponsored the league. Just two years later, the league played under the umbrella of American Football in Israel and they had their first Bowl in 2008.

On June 20, 2017, Kraft and 18 Hall of Famers were on hand to cut the ribbon of the Kraft Family Sports Campus in Jerusalem, where all the playoffs and Bowls are played. Located in the Arazim Valley, the new stadium is on Israel's Route 1-just as the New England Patriot's Gillette Stadium is on US Route 1. This isn't a coincidence. Kraft definitely sees a connection between his success with the Patriots and his love of Israel. "My late, darling wife Myra always used to tell me that until I start building football in Israel, I would not win anything with Patriots. That happened in late 1999, and we won our first Super Bowl in 2001. Now we have five championships, and I can't ignore the connection between our continuing to support development in Israel and our great accomplishments," he told the Jerusalem Post.

So how does a Christian PE coach fit into this?

During the 2013-2014 IFL season, Betzalel Friedman took over as IFL commissioner. Back here in the States, and around the same time, Dobson was asked to go to Barcelona to start the first American full-contact football camp. Gathering several Central Florida coaches, he put on a program for about 50 Spanish youth. When he returned, the Orlando Sentinel brought attention to his program and the American High School Coaches Association, of which Dobson is a member, saw the article and asked him to speak at a national convention in Charlotte about the opportunities to lead coaching clinics all over the world.

The son of missionaries, Dobson grew up in Egypt and had the opportunity to travel all over Israel.

"It was easy to cross over into Israel at the northern border, which is totally closed now," he said. He and his friends would go to the beaches in Israel. "All the waves are on the Israeli side! It's 'flat' on the Egyptian side. No one wants to go into 'flat' water," he said with a laugh.

Then he spoke seriously. "I love Israel. People who have visited understand the power of the country. ... the feeling of pioneerism in the country for me as a young kid was very powerful in my life."

Because of the love Dobson has for Israel, he caught wind of the little football league developing there. Dobson visited the IFL's website and contacted Friedman, telling him "I want to help spread the game of football."

Later, Friedman was invited by the Kraft family to come to the Pro Bowl, held at Camping World Stadium in Orlando, and he and Dobson met.

"We met down on I-Drive," Dobson recalled, "and talked for two hours about different ways to help."

Friedman explained to him the "3Es" in which the league needs help: Education, Equipment and Economics.

"I'm just a teacher and a coach. I don't know how to help economically, but I can help with education and equipment," Dobson stated.

As for equipment, Dobson has contacted several Florida high school coaches to help donate used equipment. "The IFL is growing very, very fast and they just don't have equipment to meet the demand," Dobson explained.

With his coaching background, Dobson knew he could offer help educational help. Friedman told him that last year the IFL sent two coaches to a school in Knoxville, Tenn., for an initial internship, which proved to be successful.

The two men agreed the best way to help was to send an Israeli coach here to learn the ins and outs of high school varsity football.

"He was the perfect fit," Dobson said. "He is 24 and has a long future ahead of him in coaching. Plus he is passionate about the game."

In addition to learning the varsity high school program, Eliahu will be exposed to a range of youth football programs.

"One of the best and the largest youth programs in Central Florida called East Orlando Junior Predators is right here," Dobson stated. "It's important for him to see how this program is built as well because if Israeli football is going to grow, it's got to be from the youth. Capturing the heart of the youth that will grow up with the game makes it a better program in the end."

Eliahu is the coach of the adult team called Beersheva Black Swarm and the youth team called the Spartans. His teams are located in the Negev football division, under the IFL. He isn't paid for coaching, and has a day job as a dog handler for a security company. He is also an American citizen.

What does he hope to accomplish while in the States? "The IFL has been around for only 11 years and most teams practice twice a week for about 7-8 months," Eliahu said through email. "Because of the small number of practice hours, our experience and knowledge of the sport is lacking. The coming season will be our first 11-on-11 football, adding another element we are inexperienced in. I hope to gain a lot of knowledge and experience coaching football during my time in the States. Two months of daily practices equals the practice time we have in an entire season!"

While here, Eliahu will be putting in 12-hour days, substitute teaching at the school, football practice for three hours, followed by the youth football program.

This is where the Jewish community can help. Dobson contacted the Heritage as well as the Jewish Federation's JCRC and explained Eliahu needs a place to stay and transportation during his training here. He will arrive mid-June and stay until mid-October, when Israel's football playing season begins.

The requirements for his accommodations include a bed and breakfast. He will be gone for most of the day, his lunch and dinner will be provided by the school. He will also need a ride to Faith Christian Academy, which is located at 9307 Curry Ford Rd, Orlando, near the intersection of the 417 and Curry Ford Road.

Dobson also said that if transportation is a problem, whether getting to the school or getting back to where he is housed, arrangements can be worked out. The important thing is the roof over his head.

Eliahu is a secular Jewish Israeli and finding a Jewish home is the best option for him.

"We were thrilled when Coach Dobson reached out to the Jewish Federation, and we look forward to helping Nadav develop a meaningful and lasting relationship with the Central Florida Jewish Community. Promoting interfaith engagement is a core objective of the Federation's Jewish Community Relations Council, and Coach Dobson and Nadav's experience together will be invaluable not only for themselves as professionals, but also the Jewish and Christian communities they represent," said Ben Friedman, JD, director of Community Relations.

If you and your family would like to help provide lodging for Eliahu, please contact the Heritage at 407-834-8787.