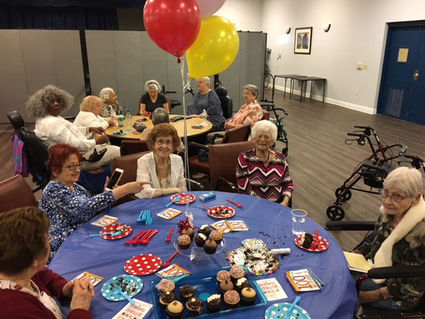 The Kinneret Council on Aging, a nonprofit agency that provides ongoing programs and services to residents of Kinneret Apartments, recently celebrated the 100th birthday of resident Ruth Salzman.

Born Ruth Bornstein in Paterson, New Jersey, on April 11, 1918, Ruth reached the 100 years old milestone, and she celebrated with family and friends at Kinneret. She has been a resident of Kinneret since 2001, which was founded by cousins Jerry Bornstein and Flossie Gluckman.

Ruth along with her husband, Sol Salzman, and daughters, Carol and Maxine, moved to Clermont, Florida, in 1949 and Orlando in 1951. The family moved to be near her father who was in the Citrus business where she helped with the bookkeeping. Salzman was a member of the Temple Israel choir, Hadassah and Sisterhood in addition to serving as temple president from 1985-1987.

Salzman, talented and smart, was a devoted volunteer as a Pink Lady at Orlando Regional Hospital, We Care Crisis Center and CITE, which provides services to children and adults with blindness and other disabilities and where daughter Carol was CEO.

Her first paying job was at SunTrust bank from the mid 1980s through 1993. Hobbies included designing and sewing. She often sewed matching outfits for her daughters and their dolls. When one of her daughters could not find a dress for her sweet-16 party, Salzman sewed exactly what her daughter described, a beautiful yellow, dotted-Swiss dress.

Kinneret Apartments, located in downtown Orlando, provides subsidized housing to 280 independent seniors. For information on the facility or to find out how you can donate to KCOA, please go to http://www.kinneretapartments.com or contact Sharon Weil.