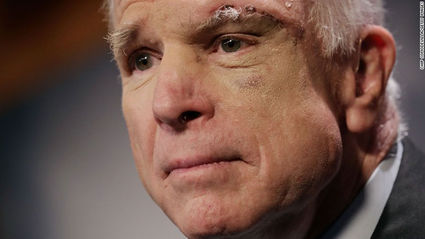 What kind of White House do we have? What's with our 45th? What is happening to Congress? (Well, maybe I won't be alive much longer to care, but my children and grandchildren hopefully will be). Who ever made that remark about Senator JOHN McCAIN "dying anyway" should be fired! John McCain is what America is all about... (or should be about.)

He has served our country honorably, I trust every word he says. He's not a liar! He tries to do the right thing for all of us, even if it goes against his party's lines. (I am NOT a member of Senator McCain's party but I have a world of respect for him. We need more of him. We certainly do!!

I received this in the mail...

"The World Jewish Congress condemned the vandalism attack carried out in December against a kosher restaurant in Amsterdam. The restaurant windows were smashed and the alleged perpetrator of the attack, who was arrested, was carrying a Palestinian flag.

WJC CEO and Executive Vice President, ROBERT SINGER said, "Anti-Semitism is raising its ugly head across Europe once again on both the right and the left, among pro-Jihadists, anti-Zionists, and neo-Nazis. There can be no tolerance for any anti-Semitic violence or hate speech. No Jew should ever have to live in fear or danger."

(Believe me, I agree. When I was five and living in the Red Hook Projects in Brooklyn, before WWII, I had to learn my "Hail Mary's" and an "Our Father", and say I was Catholic in order to avoid harm!)

I received this letter from the Jewish Pavilion and I pass it along (with great pleasure.):

"When someone says "I am going to visit the seniors," an assumption is made that they (the seniors) are older than their visitor. This is not the case with GLORIA NEWBERGER who has been visiting seniors for 15 years.

Gloria is turning 90 and she still visits "the elderly," many younger than she (but maybe not in spirit...and certainly not in looks!)

Gloria initially connected with SHIRLEY SONNE, a resident of the Westchester who referred to Gloria as her "Guardian Angel."

Over the years Gloria has visited many individuals and assisted with ice cream socials at Savannah Court and Eastbrooke Gardens and Shabbat Services at Oakmonte Village.

Gloria's warmth and enthusiasm is contagious. She is a ray of sunshine wherever she goes.

Her nickname is "Glow" for this reason.

On Sunday, May 27, at 2 p.m. in the Senior Lounge of the Maitland JCC, the movie "Goya's Ghosts" with Javier Bardem and Natalie Portman will be shown. Refreshments are available.

The JCC39ers meet in the Senor Lounge of the Maitland JCC at 1 p.m. for various programs. On Monday, June 4, there will be a Trivia Contest presented by Sheldon Brook.

We made this waiter crazy... but he did his job perfectly in spite of it!

I'm referring to ANDREW LAATSCH, a waiter at the Outback Restaurant on Aloma Avenue, Winter Park.

We were about nine for dinner... all changing our minds about what to order, etc. but Andrew was on the ball! Thanks for the great service! 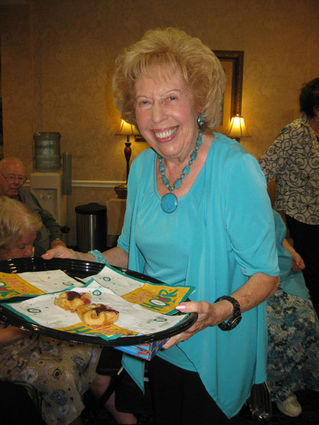 Sam was out shopping in the Altamonte Mall when he meets his friend Abe outside the jewelers. Sam notices that Abe has a small gift-wrapped box in his hand.

"So what have you just purchased, Abe?" Sam asks.

"Well, now that you've asked," replies Abe, "it's my Rifka's birthday tomorrow and when I asked her this morning what she wanted for her birthday she said, 'Oh, I don't know, dear, just give me something with a lot of diamonds in it.'"

Abe replies, smiling, "I bought her a pack of cards."