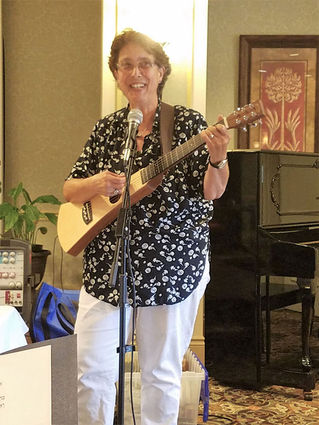 Susan Bernstein with her "travel guitar."

As about 40 Jewish residents of Oakmonte Village's independent living building sat expectantly on a recent Friday evening, Jewish Pavilion volunteer Susan Bernstein strapped a thin, boxy "travel guitar" around her neck. Since she was filling in for their regular twice-monthly Shabbat service leader, Cathy Swerdlow, Bernstein first introduced herself to her "congregation," mentioning her Long Island, NY, origins and bantering easily with the residents as some called out where they're from.

She began the service with an upbeat rendition of the song "Shabbat Shalom," singing and playing the guitar as the residents sang and clapped along. Before beginning the formal prayers, she reminded everyone that Jews have various levels of knowledge of Jewish prayers and practice, and that just saying "Amen" at the close of a prayer has the same effect as saying the prayer itself. Then she lit the Shabbat candles.

After more than three years of leading services and offering Jewish holiday programming at various senior living facilities around town, Bernstein knows how to engage her audiences and quickly win them over. The services she leads incorporate musical instruments and include insights into the prayers and traditions, delivered with warmth and humor. At the end of the service at Oakmonte, residents lingered, crowding around her to offer their thanks.

Bernstein brings wide experience as a music and Jewish educator to her volunteer work with the Jewish Pavilion. With a degree in music education from University of Bridgeport and postgraduate studies in ethnomusicology at Hebrew University in Jerusalem, Bernstein has taught music in American public schools, programmed classical radio programs for Israel national radio, worked as an announcer for a classical music station in Dallas, Tex., and taught in the Ashkelon music conservatory.

She has also led teen tours to Israel, has taught at and directed Hebrew schools, and was a Judaic studies teacher in day schools, living in several states. She came to Orlando in 2014 as the congregational life coordinator for Temple Israel and continued there for two years until the staff was restructured and the position phased out. She remains part of the congregation's spiritual life, on occasion leading services and reading Torah and Haftarah.

Bernstein began her affiliation with the Jewish Pavilion when she came to work at Temple Israel, taking students to Brookdale Island Lake's assisted living wing to lead monthly Saturday Shabbat services. Bringing challah and wine, the students would sing, tell stories, and sit and talk with the residents. When her mother, Pearl Bernstein, moved to Island Lake's independent living in 2015, Bernstein was pleased to find the Jewish Pavilion offers weekly Shabbat programs there and volunteered to lead one per month. That grew into volunteering to lead the twice-monthly services at Oakmonte Village's assisted living building and doing holiday programs at a number of facilities around town.

At each location, she incorporates musical instruments into the programs. "Especially in memory care, it's a very important element," Bernstein said. The music is a "strong tie to the past" and a tool to reach people, especially those who may be nonverbal or remote, she added. She often passes out a variety of rhythm instruments to help engage the residents and promote motor skills. When she plays a song they remember from their youth, "many of them could sing every word to the song, and they come alive, and they're happy," Bernstein said. "It's a very potent medicine."

She remembers a man, Al, who attended one of the programs with the Temple Israel youth. He had seemed hard to reach. But when they sang "Adon Olam" at the end of the service, "he was so involved in it and he was able to sing all the words," said Bernstein. "You could really see that he was enjoying and getting a lot of benefit out of being able to demonstrate something that he once knew. He was using the ability of his memory."

Such experiences bring Bernstein much pleasure. "I really appreciate the work that the Pavilion does," she said. She also appreciates the efforts of the facilities' management teams to collaborate with the Jewish Pavilion to keep their Jewish residents connected to their heritage. "I know firsthand, at Brookdale, that they do everything they can to make the Jewish residents feel at home," she said. "They try to understand and offer as much assistance to us volunteers." The Oakmonte staff has also been responsive.

Jewish Pavilion volunteers bring so many different skills and talents to their volunteering, but most of all they bring their caring hearts. They provide a valuable service to seniors and to Orlando's Jewish community, and they are so appreciated! If you have some time to spare, please consider becoming a Jewish Pavilion volunteer. Call 407-678-9363 for more information.