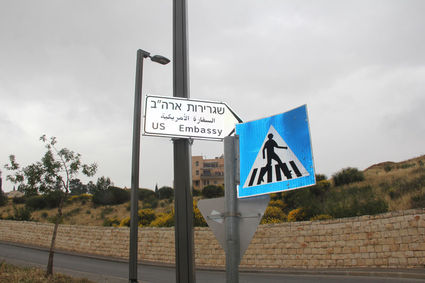 A newly hung sign pointing to the U.S. Embassy in Jerusalem, which was inaugurated on May 14, 2018.

JERUSALEM (JTA)-As he strolled on his leafy, narrow street overlooking what is now the United States Embassy in Israel, Ben Katz stepped back to dodge the side-view mirror of an oncoming truck, which had jutted onto the sidewalk.

A few hundred feet past Katz's garden apartment, four security guards lounged under a tent. Below them, adjacent to a walking path leading to a small park, was the U.S. diplomatic compound that, on Monday, became the embassy.

"For practical purposes, it's a question of just how the entire neighborhood is going to adjust to more people passing through and that much more going on," said Katz, 29, an American immigrant who has lived in Jerusalem since 2012 and moved to the neighborhood last year. "It's much less of an issue of politics or anything like that, and just an issue of congestion. The things we're concerned about are more traffic and the rent going up."

The embassy's move from Tel Aviv to Jerusalem, which took place Monday in a ceremony with hundreds of U.S. and Israeli officials, has caused an international controversy. The United Nations General assembly voted 128 to nine, with 35 abstentions, to condemn President Donald Trump's decision to recognize Jerusalem as the capital of Israel On Monday morning, dozens of Palestinians storming the Gaza border, partly in protest of the move, were killed by Israeli troops Israel and its supporters have celebrated the decision as a recognition of its capital and of Jewish history in the city, while Palestinian officials and their allies have decried it as violating their claims to Jerusalem.

But in Arnona, the neighborhood surrounding the embassy, residents sounded unconcerned by the embassy's historical significance, and unruffled about its potential to spark riots. Most of them supported the move, as do the majority of Israelis. But they talked more about how an influx of American diplomats and public figures would disturb their quiet surroundings-bringing more cars and higher rents-but also bring in more customers to shops and restaurants.

"It will affect the roads-that's what we're worried about, the residents," said Yehezkel Balas, 67, a building contractor who lives in Arnona and whose son owns a bakery here "There will be more traffic on the road. And for business it will only do good. There will be more people, naturally, and more demand for apartments for rent. Big picture, it won't do damage."

Located in southern Jerusalem, on the seam line between the city's Jewish and Arab western and eastern sides, Arnona is a residential area removed from the city center, accessible by only a couple of bus lines. Founded about a century ago, it's home to about 12,000 people, mostly families, kids and senior citizens, both religious and secular Jews. The embassy building opened here as a consulate in 2010, supplementing the older U.S. consulate in central Jerusalem.

On the hilltops next to Arnona, and farther from the embassy, are the Arab neighborhoods of Sur Baher and Jabel Mukaber. Residents say one-on-one relations between Arabs and Jews are good-and unlikely to be damaged by the embassy's move. Despite the headlines, they feel that Arabs and Jews in Jerusalem are interacting more and more.

"I don't believe there will be an attack," she added. "There will be some noise in the beginning, but then it will be taken as a given."

Residents say they moved to Arnona for the neighborhood's tranquility and space-Katz's apartment, for example, has a small front yard. Around the block is a strip mall with a bakery and a hair salon.

Getting to the embassy, which is at the top of a valley, means descending down a walking path and around a traffic circle now named for Trump. A few days before the embassy's opening, streets were empty as workers hung Israeli flags from lampposts and cleared the sidewalks of dirt. 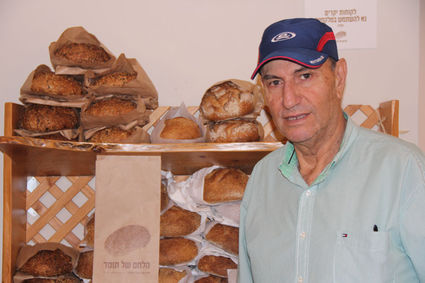 Yehezkel Balas, a building contractor and resident of Arnona, said the embassy will bring more traffic, higher rents and more business to the neighborhood.

"The residents of Arnona didn't bring the embassy here, they didn't ask for it, and the residents of Sur Baher understand that," said Alon, 62, a journalist who has lived in the neighborhood for 26 years and declined to give his last name. "Life has more permanence than politics, so the politicians won't succeed in disturbing us and messing up our lives."

The move will concretely disturb the lives of at least some Arnona locals Several hundred elderly immigrants from the former Soviet Union live in public housing in the Diplomat Hotel, a property next to the embassy that the U.S. government purchased in 2014. As the embassy expands, the immigrants will have to move out. But even so, at least one of them sounded as nonchalant about the move as the rest of her neighbors.

"That everyone hates our state is a problem, but this is OK," said Nadia Freidlin, 81, regarding the embassy. "I'm happy that it will be here."