Angels in the sky over Israel 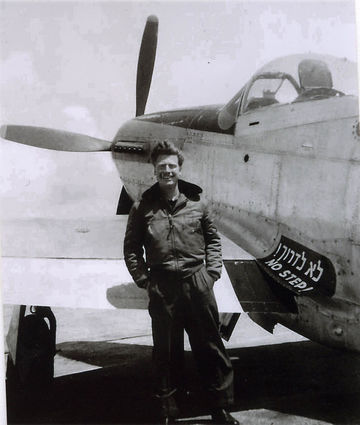 I never met Mitchell "Mike" Flint, but before I had even heard of him, I knew about him and his legendary sense of being on the right side of history in the establishment of the State of Israel. When I read about Mitchell, Jewish and Israeli newspapers were filled with accounts of his life in obituaries that heaped praise on his heroism, and that of others like him.

There's a Jewish tradition to comfort the mourning surviving family members of one who dies and I was able to connect with one of Mitchell's sons, to express my condolences and thanks, posthumously, for what his father did. We chatted, became friends, and through that I got to learn about his father and how we in Israel today have much to be thankful to him for.

The story of Mitchell Flint is depicted beautifully in "Angels in the Sky" by Robert Gandt. The vivid story about Mitchell and dozens of others like him gives a sense of being there during the historic challenges they confronted. They were Jews and gentiles, some looking for action following their "retirement" as fighters in WWII, some looking to be part of the defense of the Jewish people and establishment of Israel. Some were religious and others were not. But a common sense of purpose and an historical opportunity united them all.

Mitchell Flint was one of dozens of non-Israeli volunteers who comprised Israel's first air force. Understood by Israel's first Prime Minister David Ben Gurion that the coming war of independence could not be won without air cover, a plan was carried out to acquire as many planes and arms as possible for the fledgling Jewish state and its population of 600,000. "Angels in the Sky" depicts sometimes chillingly the efforts made to build an air force to ensure Israel's victory. There were many challenges and setbacks, such as aircraft malfunctions and crashes, along with legal and military obstacles that required surreptitious counter measures. Many of those in charge of building the fleet put themselves in harm's way, and legal jeopardy.

Planes were ferried to Israel under cover of secrecy and darkness. Refueling stops became perilous and could not be taken for granted. In parallel, as Israel built a fleet of old aircraft that were left over from WWII, Israel also manned its air force in a piecemeal way, picking up volunteers from the US, from South Africa, Europe, and who were complemented by a handful of native born Israeli Jews who had flown in the British air force.

Often there were more pilots than working planes. As planes got injured, in battle and through accidents, ground crew put together working parts from different planes to keep as many airborne as possible. "Angels in the Sky" is a compelling history told through the first hand perspective of the men who volunteered and fought these battles.

May 29, 1948, two weeks after Israel declared independence, and weeks into heavy fighting that ultimately led to Israel's improbable victory, was the day of Israel's first air strike. Until that point, every effort had been made to arm to capacity, but the war would not wait for Israel's air cover.

Mike Flint had his first turn at combat against the vastly larger and better armed Egyptians a few weeks later. He and his team always knew they risked putting their lives on the line. Indeed, dozens of Israel's founding air force were lost. But with the old planes they flew, risk came from other sources than Arab armies.

Mike Flint was becoming more familiar than he wanted with the enclave called the Faluja Pocket. Every day, sometimes several times a day, Flint and his dive bombing team visited Faluja. The 4000-man Egyptian brigade inside Faluja had become isolated when the main Egyptian army retreated southward to Gaza. Eliminating the Faluja Pocket had become a prime objective.

(On) the fifth day of Operation Horev, Flint's dive bombers were again planting 50-kg bombs on Egyptian positions. The Egyptian gunners weren't improving with practice. The same anti-aircraft fire was coming from somewhere in the enclave, but hitting nothing. Flint made his second steep dive on the target. He punched off his last four bombs. He opened with his machine guns to discourage the Egyptian gunners. Then he roared for the safety of the sea.

Over his shoulder he could see the plumes from the explosion(s). Once again, he'd gotten away with it. Or so he thought. Flint's wingman, John Soltau, was sliding to his left wing, waving, pointing to the belly of Flint's (plane). "I started to get this sinking feeling in my stomach," Flint recalled. He knew what Soltau was pointing at. A hung bomb. Flint...pushed the bomber into a dive, then hauled the nose up in an abrupt four-G pull out. He did it twice. The bomb didn't budge.

This was just one of many air battles of Israel's War of Independence. Watching air shows during the celebrations of Israel's 70th anniversary, which included aircraft sent from other countries to join the celebration, my mind turned to Israel's first volunteer air force with profound gratitude.

Without them, it's hard to say what would be. But the book is a compelling tribute to one of the many ways that Israel struggled to survive against what would have been insurmountable odds in any other place. With combination of bravery, fortitude, and chutzpah, the improbable became real. 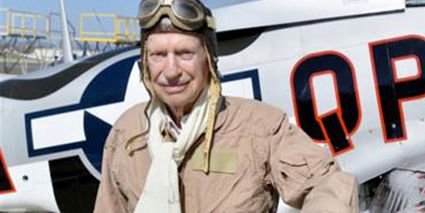 Mitchell Flint is seen by a P-51 Mustang in this photo released on behalf of his family after he died.

Of course these men were heroes, but the book's title also gives a wink to an invaluable element of the victory then, and Israel's ongoing survival. Angels are not free agents. They don't act on their own. They are agents and emissaries of God, and it's easy to see, and essential to recognize, these men were the extension of God's hand, or in this case His wing, protecting Israel as He's always promised to do.

Jonathan Feldstein was born and educated in the U.S. and immigrated to Israel in 2004. He is married and the father of six. He has a three-decade career in nonprofit fundraising and marketing, and throughout his life and career he has become a respected bridge between Jews and Christians. He writes regularly on major Christian web sites about Israel and shares experiences of living as an Orthodox Jew in Israel. He can be reached at FirstPersonIsrael@gmail.com.