Prominent Israeli artists to teach at top US universities 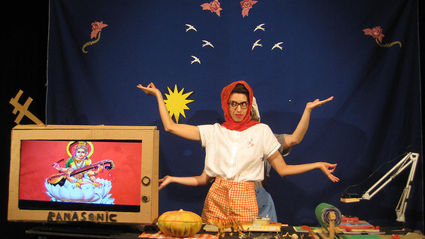 WASHINGTON, D.C.-Now beginning its second decade, the Schusterman Visiting Israeli Artists Program will bring 10 prominent Israeli artists for residencies at top universities across the United States for the 2018-2019 academic year. The University of Central Florida is one of the 10. Among the artists are Taiseer Elias, the leading figure in classical Arab music in Israel, and Moshe Zonder, the head writer for the popular television series, Fauda.

Coming to UCF is Meital Raz, from Jan. 2, 2019 – April 22, 2019.  Raz is a director, performer, writer, and puppeteer working in contemporary visual theater in Israel and abroad. Her award-winning "The Man in the Moon" (2016) is based on a 16th- century science fiction novel by the English Bishop Francis Godwin. With only a piece of paper, a pair of scissors, and some tape, Raz becomes a British bishop, a Spanish adventurer, and the moon all at once, all the while sitting behind a small table. Such feats are typical of Raz's inventive theater works, which have been presented in Brazil, England, France, Germany, Israel, Poland, and elsewhere.

The Visiting Artists Program is an initiative of the Israel Institute, a Washington, D.C.-based academic institute, aimed to enhance knowledge about modern Israel by bringing Israeli filmmakers, choreographers, musicians, writers, and visual artists to leading universities and other cultural organizations in North America for residencies.

The program, founded by the Charles and Lynn Schusterman Family Foundation in 2008, fosters interaction between the artists and the communities in which they are based, exposing a broader audience to contemporary Israeli culture.

"The Schusterman Visiting Israeli Artists program is the bridge between the Israel Institute's academic and cultural programming. These visiting artists provide more than just classes that teach skills; these artists provide a window into the heart of Israel," said Dr. Ariel Ilan Roth, executive director of the Israel Institute. "Cultural education provides insights into the fabric of a society in the way that other courses cannot, and the understanding of students enrolled in these classes is deeper and more enriched as a result."

Since inception, the program has supported 94 residencies at colleges and universities across North America. To date, 106 artists have participated, among them a recipient of The Israel Prize, Israel's most prestigious award; an Emmy nominee; numerous recipients of Israel's highest literary awards; and many winners of multiple Israeli Oscars.