This past Memorial Day, a Stalag 17-B POW was remembered 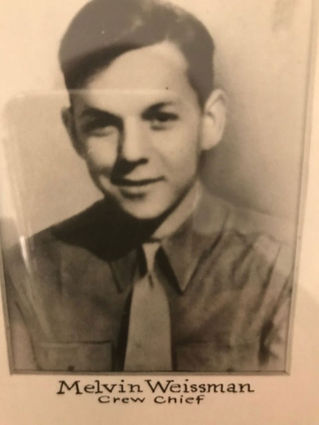 Melvin Weissman as a young soldier.

Melvin Weissman didn't have to fight in World War II.

As a machinist for an essential industry, he needed permission from his company to even enlist. He was first rejected by the army as he had flat feet. But the 22-year-old was determined to fight for his county.

Undeterred, Melvin, along with several of his friends, tried to enlist in the United States Army Air Corp. This time, he was accepted, flat feet and all. When he said good-bye to his family, Weissman was overcome with emotion. "I knew I would never see my father again," Weissman later told his daughter, Diane Silverman.

After basic training, Weissman was assigned as a flight engineer flying B-17s with the USAF, 94th Bomb Group, 331st Squadron, out of Bury-St. Edmunds, England.

Weissman had grown up in Brooklyn, the son of Nathan and Dora Weissman, Jewish Russian immigrants. He knew that "H" for Hebrew, Jewish designation on his dog tags could cause a problem if he was captured by the Germans. He requested that his tag be changed to "P" for Protestant, to be worn on each bombing missions.

Weissman and his fellow soldiers flew 10 successful missions over Germany. On his eleventh mission, however, the plane was hit. He and several soldiers jumped out the plane safely; others lost their lives when the plane crashed.

When his parachute brought him into enemy territory, Weissman realized that he had accidentally worn the dog tags with the Jewish designation, the letter "H." He quickly tossed them away before a 10-year-old German boy found the scratched and bruised solider and turned him over to Nazi soldiers.

During his interrogation, Weissman was asked questions in English from a commander. In the same room, behind a screen, was another commander telling the interrogator in German what questions to ask the captured soldier. Because his parents spoke Yiddish in their house, Weissman understood the Germans and knew the questions ahead of time. To further hide his Jewish identity, he gave his name as "Veismann," a more German form of his Jewish name.

Weissman was sent to Stalag 17-B, where he remained a prisoner of war from Jan. 11, 1944, to May 3, 1945. While he was in prison camp, a neighbor of the Weissmans heard a blurb on the radio that Staff Sargent Melvin Weissman had been captured. His father, who was in failing health, said the he would believe this was true only when he heard from his oldest son. A letter finally came to their Brooklyn address on April 2, 1944. Nathan Weissman died the next day. Weissman's premonition had come true. "My aunts told me he was just waiting to hear that Melvin was ok," said Diane.

In April 1945, as the war was coming to a close, 4,000 of the POWs at Stalag 17-B began an 18-day march of 281 miles to Braunau, Austria. The remaining 900 men were too ill to make the march and were left behind in the hospitals. These men were liberated on May 9, 1945. Those who survived the death march were finally rescued by American troops.

Weissman and his fellow liberated soldiers were shipped home to New York City. While sailing, Weissman was taken ill. When he arrived, he walked down the gang plank where doctors, pulling him aside, put a giant yellow J on his shirt. When he asked how they knew he was Jewish, they laughed. "We don't know if you're Jewish," they said. "But we DO know you are jaundiced."

Weissman spent three months in a hospital in New Jersey recovering from his imprisonment and subsequent illness. When a rabbi came in to tell Weissman that his father was dead, Weissman said, "I know. My mother and sisters never mentioned him in his letters, but I knew I was saying my last goodbye to him when I left for basic training."

Once he was healthy, Weissman returned home and got a job as a machinist for Templet Industries in Brooklyn, New York. He met Sylvia Laskowitz in January 1948. They were married six months later, on June 27, 1948. Their daughter Mona was born 15 months later, and their second child, Diane, was born in 1953.

Diane remembers a happy childhood, marred only by quirks that she attributes to his status as a POW. "Dad was not a very trusting person except for his wife and two daughters," said Diane. Although he never spoke about his war experiences while she lived at home, Diane remembers hearing her father cry out in his sleep. She often found him sitting on the edge of the bed, covered in sweat. Diane did her best to soothe him, to try to help him move past his nightmares.

By 2007, Sylvia, his wife of 58 years, and Mona had both passed away. Weissman had severe heart problems and reoccurring bouts of post traumatic stress disorder. As he was no longer able to live alone, Diane and her husband, Mark, moved him into their home in Clifton Park, New York. More war stories started coming out. Weissman talked about his time in the camp. Conditions may have been difficult for American soldiers, but he spoke sadly of the treatment given to Russian and Polish POW's. He also recounted his long days on the death march and his rescue.

By 2010, Alzheimers had set in, and Weissman became very combative, "a tortured soul." After some violent episodes in which he threatened Diane physically, she and Mark made arrangement to move him to Albany Stratton VA Medical Center. Three days before he was to make the move, Diane found her father dissolved in tears. "What is wrong, Daddy?" Diane asked.

"I killed a man!" sobbed her father.

"Daddy, if you didn't kill him, he would have killed you. And you never would have been married to Mom or had your daughters, your four grandchildren, and the great-grandchild you have on the way."

This calmed him. It was also the last coherent conversation Diane had with her father.

Hero's Way, the hospice unit of VA Hospital, provided the care the exhausted and haunted ex-GI needed in his remaining days. Seven weeks later, on Sept. 11, 2011, Melvin Weissman quietly passed away. His great-grandson Judah Benjamin Rome, who was given the Hebrew name Moshe Dov after Melvin and a paternal great-grandfather, was born Nov. 22, 2011.

For several years, Congregation Beth Shalom had had a low-key breakfast on the Sunday before Veterans Day. Soon after his father-in-law died, Mark asked Diane if she wanted to honor her father by sponsoring the breakfast.

Diane agreed, but only on her own terms. The danish and coffee were accompanied by huge plates of Diane's luchen kugel, homemade quiche, and fresh fruit. Between 75 and 100 members of the congregation and their guests, many themselves veterans, attended the elaborate brunch for the next six years until the Silvermans moved to Connecticut in 2016.

Diane still has the American flag that was draped on her father's coffin, and she proudly displays it on the wall of her living room. "I brought it to every Veterans Day brunch, and I proudly display it on the walls of our home," said Diane. "It is my way of remembering an American Jewish GI, a former prisoner of war, and the best dad in the world!"