Shifting sands? Grassroots element in the Democratic Party moves away from Israel 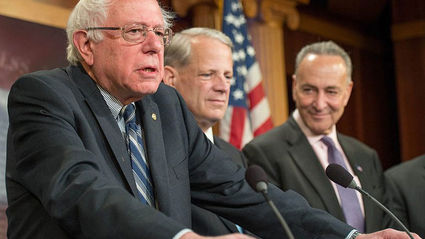 (JNS)-A great deal of ink has been spilled writing about the growing partisan divide in Washington, D.C. In fact, one of the few remaining bipartisan issues has been support for Israel. But even so, a recent Pew Research Center survey found that only 27 percent of Democrats sympathize with Israel over the situation regarding the Palestinians, compared to a whopping 79 percent of Republicans.

The dichotomy was on full display this week in reaction to the opening of the new U.S. embassy in Jerusalem and two days of consecutive violence in the Gaza Strip, which led to 62 Palestinian deaths and as many as 2,000 others wounded. A number of Democratic legislators blamed both the Trump administration and Israel for the violence.

The most critical among them was Sen. Bernie Sanders (I-Vt.), who is considered to be the de facto leader of the grassroots activist movement among elected liberals. Sanders, who is Jewish, was outspoken in his criticism of Israel's actions, strongly condemning the actions of the Israel Defense Forces to the tens of thousands of rioters massed at the Gaza border with Israel.

Sanders, along with 12 of his Democratic Senate colleagues, also sent a letter to U. S. Secretary of State Mike Pompeo urging the United States to "do more to alleviate the ongoing humanitarian crisis in the Gaza Strip."

The senators also called on the administration led by U.S. President Donald Trump to restore funding to the United Nations Relief and Works Agency for Palestinian Refugees, known more commonly as UNRWA.

Representing this growing divide, Senate Minority Leader Chuck Schumer (D-N.Y.) was one of the few Democrats to endorse the embassy move earlier in the week.

"I introduced legislation in 1995 that said we should move the embassy. Every country should have a right to choose its capital. There's been a tragic loss of life and violence and both sides should aim to stop the violence," Schumer, who is Jewish, said in a statement provided to JNS.

Among the rest of the Democratic caucus in the Senate, reactions ranged from concern over the Gaza situation to full on condemnation of Israel's use of lethal force.

Sen. Elizabeth Warren (D-Mass.), who is up for re-election this year and rumored to run in the 2020 presidential elections, expressed strong concern over the escalating situation in Gaza, through stopped short of condemning Israel.

"I am deeply concerned about the escalating deaths and injuries in Gaza. Israel has a right to defend itself from violence by Hamas, but it must exercise restraint against Palestinian civilians and peaceful protesters," she said.

Similarly, Dianne Feinstein (D-Calif.), who like Schumer did vote for the 1995 Jerusalem Embassy Act, condemned the U.S. embassy move for fueling the violence, slammed the Trump administration for blocking a U.N. investigation into the Gaza deaths and also called for Israel to show restraint.

"While protests must remain peaceful, Israeli forces must exercise greater restraint in the use of live ammunition," said Feinstein, who is also Jewish. "President Trump's decision to move the U.S. embassy was a serious mistake that will reverberate throughout the region."

Meanwhile, in the House of Representative, a group of 10 Democrats, many who have received funds from J Street's political-action committee, expressed "deep concern" over the violence and loss of life at the Gaza border.

Among the emerging stars of the Democratic Party in the House, such Massachusetts Reps. Seth Moulton and Joe Kennedy, came no endorsement of the embassy move; however, neither criticized Israel's actions in Gaza.

"In going against the advice of national-security experts, President Trump has driven Israel and Palestine further apart, and made the world less safe," Moulton told JNS.

Moulton added that "dozens have lost their lives as a direct result of this decision, and the path to a two-state solution seems murky at best. The United States now has an obligation to work harder than ever to repair what is broken and bring willing partners to negotiate a lasting peace."

Kennedy's communications director Dan Black told JNS that "Congressman Kennedy urges Israel and Palestine to bring an end to the escalating violence along the Gaza border."

Yet Kennedy also later said in a statement, "While Israel has every right to defend her borders, the excessive use of lethal force-combined with abhorrent incitement and instigation by Hamas-has taken too many innocent lives. This must end."

The Massachusetts congressman continued, saying "neither is the United States blameless. Our embassy in Israel ultimately belongs in Jerusalem. But the Trump administration's hasty relocation was certain to spark anger, violence and unrest. Nonetheless, they barreled forward with no effort to mitigate this risk and no strategy to help facilitate the peace this region deserves."

Is an activist element turning against Israel?

As the 2018 midterm elections approach, many within the Democratic Party believe that they have a strong opportunity to take back control of the House and possibly the Senate. Driving much of this Democratic enthusiasm is an activist liberal base that has become strongly opposed to Trump and Republican control of Congress.

"Democrats are increasingly viewing Israel through the lens of American partisan politics, rather than judging Israel by an independent standard," Michael Koplow, director of the Israeli Policy Forum, told JNS.

Like the Republican Party faced with Tea Party activists several years ago, Democrats are increasingly vexed about certain grassroots leanings within its base. This was on display in congressional primaries across four states this week, when several very liberal candidates defeated party moderates, which some Democratic strategists worry may thwart their hopes of winning back the House in the November mid-term elections.

And, of course, they worry how this liberal element will affect support for Israel?

Koplow noted a marked swing within the Democratic Party, especially at the grassroots level, in recent years towards a more critical stance on Israel.

"There is no question that there is a shift within the Democratic Party, which can be observed both anecdotally and in polling data. I think it is largely being driven by Democratic voters who are responding not only to Israeli actions that they view as incompatible with liberal values, but also by the close embrace of President Trump by the Israeli government," said Koplow.

He noted that the main question is "whether this shift is a permanent one and how far it will go, and my hunch is that it is more a response to domestic politics here than an ideological shift on Israel writ large."

That shift was on display among Democrats during the 2016 Democratic presidential primary between Sanders and former Secretary of State Hillary Clinton. Sanders, who gained a strong following among young voters and party activists, inserted more pro-Palestinian language into the Democratic Party's platform ahead of its convention. This language called for a Palestinian state with "independence, sovereignty and dignity." A plank also pushed by Sanders supporters calling for an "end to the occupation and illegal settlements" was only narrowly defeated by Clinton loyalists in a committee.

More recently, liberal movements such as Black Lives Matter and the Women's March, which have been embraced by some leading Democratic figures, such as Warren and Kennedy, have also been highly critical of Israel and Jewish groups.

Koplow countered that while these groups remain critical of the Jewish state, their main concerns center on domestic issues.

"I think that there are indeed grassroots Democrats who are far more critical of Israel than previous generations of Democratic activists, but for many of them, Israel is ancillary to more pressing concerns at home," said Koplow.

Amid the celebrations in Jerusalem this past week over the embassy opening, Republicans criticized Democrats for not making the trip to Jerusalem.

"I don't know why the Democrats will not be here, chose not to come. Every member of Congress had the option before them to come and be here. There was no way on earth we could have inaugurated this embassy without my being here to celebrate it. It's too important," said Sen. Ted Cruz (R-Texas) said on Monday from Jerusalem.

Similarly, Democrats were also absent from a celebration marking the Jewish state's 70th anniversary held at the Israeli embassy in Washington, D.C.

Moving forward, Koplow believes that there will likely continue to be divergent views of Israel among Democrats, as seen in the contrasting statements on Gaza, though that's unlikely to correlate into a major shift towards an anti-Israel stance.

"I do not envision a scenario in which a majority of Democrats embrace the anti-Israel positions that characterize some of the left-leaning political parties in Europe, but there is going to be louder and more sustained criticism of certain Israeli actions and Israel's positions toward the Palestinians," he stated.

Look, explained Koplow, "There are groups within the Democratic coalition that are hyper-critical of Israel-to the point of being anti-Zionist. That is always going to be a fact of life, much like there are going to be Republicans on the extremes who espouse anti-Semitic views. The question is how much power these groups will have over Democratic politics, and more importantly, over Democratic foreign-policy positions."