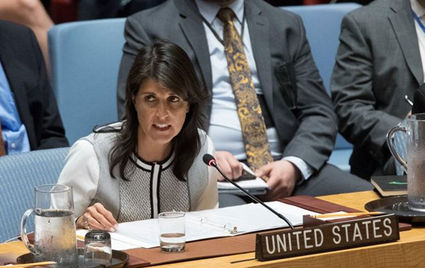 US Ambassador to the UN Nikki Haley.

The US condemned the Palestinians following the worst day of bombing by Gaza-based terror organizations that Israel has experienced since Operation Protective Edge, and called for an urgent meeting of the United Nations Security Council.

US Ambassador to the UN Nikki Haley said the UNSC "should be outraged and respond" to the largest attacks emanating from Gaza since 2014, which are "directed at innocent Israeli civilians."

Throughout Tuesday and the following night, the Gaza-based Hamas and Islamic Jihad terror groups relentlessly fired more than 100 rockets and mortars at Israeli communities surrounding the Strip, one of which exploded in a kindergarten.

The majority of the explosive projectiles were intercepted by the Iron Dome aerial defense system or exploded in open spaces, but some fell inside Israeli communities and seven Israelis, including three soldiers, were injured in the shelling. One soldier sustained moderate wounds and required intensive surgery.

Haley said "the Palestinian leadership needs to be held accountable for what they're allowing to happen in Gaza."

The US Mission to the UN said it expects a UNSC meeting to take place Wednesday afternoon.

The European Union's (EU) foreign policy chief, Federica Mogherini, called for an immediate halt to the rocket and mortar fire.

"Indiscriminate attacks against civilians are completely unacceptable under any circumstances," she said.

Earlier Tuesday, Emanuele Giaufret, the EU envoy to Israel, tweeted that "indiscriminate attacks are totally unacceptable and to be condemned unreservedly."

Israel called on the world to condemn the Hamas terror organization and take action against it.

Israel's UN Ambassador Danny Danon called on the Secretary General and the Security Council to condemn Hamas for their attacks against Israel.

"Since the early morning, dozens of rockets and mortar shells were fired from the Gaza Strip at Israeli population centers as a continuation of Hamas and Islamic Jihad's terror activities. These sustained attacks have continued unabated throughout the day," Danon wrote to the Secretary General and members of the Security Council.

"For weeks we have warned that the violent riots along the security fence with Gaza, that included IEDs [Improvised Explosive Devices] and the firing of weapons at our security forces, were not spontaneous protests, but rather part of a coordinated violent attack against the State of Israel," the letter said.

"The shells and rockets fired at our citizens leave no doubt as to the true intentions of those who incited, encourage, and even paid for those ongoing riots," he continued.

"In the interest of restoring calm and protecting civilians on both sides of the fence, I request that you strongly condemn Hamas and hold the terrorist organization accountable for these latest attacks," Danon concluded.

"Indiscriminate attacks against civilians, especially those that risk killing or injuring children, are completely unacceptable under any circumstances," he tweeted.

France condemned "these unacceptable attacks, which are targeted at civilians, thankfully without fatalities. France's commitment to Israel's security is unwavering," the French Foreign Ministry stated.

Canadian Prime Minister Justin Trudeau likewise condemned the attacks, saying "Israel has every right to defend itself against these deplorable attacks by the terrorist groups Hamas and Islamic Jihad. Our thoughts are with everyone affected today."

In a rare show of support for Israel, Ireland's Minister for Foreign Affairs Simon Coveney "strongly" condemned the firing of rockets from Gaza at Israel.

"I continue to advocate strongly for people of Gaza who live in impossible conditions-but this Hamas-led violence undermines the Palestinian cause" and is "counterproductive to political progress," he stated.

The Israeli Foreign Ministry said it had instructed embassies across the globe to seek similar condemnations of Palestinian fire.