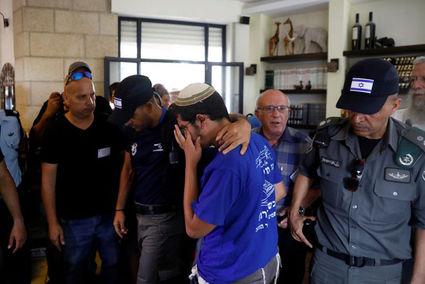 An Israeli policeman hugs a man inside a house during the evacuation of Jewish settler families in Netiv Ha'avot.

(JNS)-Israeli security forces began destroying the homes of 15 Jewish families in the Netiv Ha'avot neighborhood of Elazar in the Gush Etzion region of Judea on Tuesday, expelling residents who were joined by as many as 3,500 supporters from around Israel who arrived to protest the action.

Some 2,500 Israeli police officers were stationed in the suburban residential community just 11 miles southwest of Jerusalem to carry out the court-ordered eviction and demolition of homes the Supreme Court found were partially built on Palestinian land.

The homes were covered with Israeli flags and banners calling the Supreme Court ruling "absurd."

Gush Etzion Municipal Head Shlomo Ne'eman told JNS that "there is no justice or meaning in this destruction. It doesn't represent the values of the State of Israel."

At a rally prior to the demolitions on Monday, Israeli Justice Minister Ayelet Shaked told residents and community supporters, "Tomorrow [Tuesday] there will be a completely unnecessary eviction. It is the product of a terrible mistake. It started with the erroneous answer provided by the state several years ago and its culmination is the High Court's wrong answer now. From these ruins, we will rise and build."

Deputy Foreign Minister Tzipi Hotevely tweeted Tuesday, "The destruction of the homes at Netiv Ha'avot is a dark stain on the Israeli justice system. No justice has been done here, only injustice. The Israeli government will build a large neighborhood to replace the homes the High Court is demolishing, but the disgrace and pain will remain."

Youth from around Israel and residents of the Gush Etzion region of Judea convened in Netiv Ha'avot early in the morning, taking up positions inside homes, on roofs and in yards. As early as 7:30 a.m., police cordoned off the area, making it impossible for supporters to arrive ahead of the 9 a.m. eviction.

Residents of Netiv Ha'avot have agreed to be evicted peaceably, though some have warned they will engage in peaceful, nonviolent resistance-meaning officers will have to lift and remove them from their homes. They have urged their supporters to follow suit and remain nonviolent in the face of police. Two other neighborhood structures, a small wood shop and a memorial for two Israel Defense Forces soldiers killed in war in Lebanon were demolished last year by authorities.

In December 2016, the Supreme Court found in favor of Palestinian plaintiffs, in cooperation with the Peace Now organization, who argued that some of the private homes in Netiv Ha'avot were built on land not belonging to the state. The Supreme Court ordered that all the homes be fully razed, even those whose owners agreed to renovate the homes so as not to overlap onto the disputed land. In some cases, the encroachment onto contested land was as little as a couple of feet; nonetheless, the Supreme Court ordered the entire structures destroyed.

"We're talking about a dispute over a few meters on these homes," said Josh Hasten, a resident of Elazar. "So what we have here is extremist NGOs like Peace Now and others who know full well this isn't Arab property and no Arabs will access this property, but [they] appeal to the courts because their goal is tragically to make others Jews in Israel suffer because of their geography.

"In the end, this neighborhood will be fully recognized by the government and more homes will be built here in Gush Etzion, so in the long term Peace Now's actions will have the opposite effect of their goals," continued Hasten. "But for today, we cry over the destruction of homes, and we are here as friends and neighbors to support the families during this unimaginable ordeal."

As part of a campaign to attempt to halt the destruction, a viral video circulated on social media prior to the eviction, juxtaposing the court's unwillingness to uproot Bedouins in a case involving private Jewish land in the Negev with the court's demand that Jewish homes on land of questionable ownership in Netiv Ha'avot be razed to the ground.

The 15 homes were slated for destruction in March, but the Supreme Court granted a stay to allow for the arrangement of temporary housing for the evictees. The cabinet approved a significant compensation package for the families in February, earmarking $450,000 for each family as compensation for the demolition and another $8.31 million for temporary housing on an adjacent hilltop.

Also in February, the cabinet approved a proposal to initiate legalization of the rest of Netiv Ha'avot, which would pave the way for the construction of 350 new homes in the neighborhood. But the Palestinian plaintiffs are expected to fight the measure in a new hearing, arguing that the land proposed for the new homes is also theirs.

Supporters remained positive, however, that the demolitions would not deter the development of Jewish life in the area.

"The history and the struggle for Gush Etzion goes back a hundred years, and in the end we've always had victory and we've always come back stronger," said Josh Adler, a builder and resident of the nearby town of Efrat who arrived in Netiv Ha'avot with his wife to support the residents. "We struggled for every yishuv [town] and every house on every hilltop of all the areas in Gush Etzion."