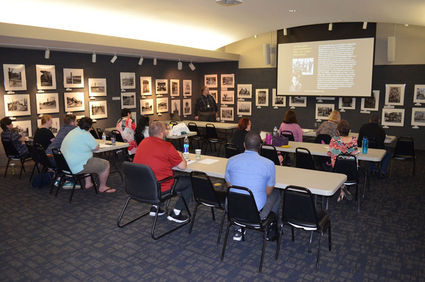 Every June, the Holocaust Center hosts an institute on Holocaust education. Teachers at every grade level, and in every discipline, are invited to participate in this multi-day institute designed to assist them in incorporating Holocaust education in their class as required by Florida Statutes Chapter 1003.42. Lectures, films, printed materials and survivor testimony help participants identify many of the things that allowed the Holocaust to happen. The Institute encourages thoughtful discussion on how to help children understand the importance of tolerance, good citizenship, and nurturing democratic values.

"The Teachers' Institute helps to expand and fortify the enormous opportunity teachers have to make an impact. I learned that it is extremely important to address racism and anti-Semitism, both during and after the Holocaust, as an integral part of Holocaust studies," one teacher said.

Dr. Norman Wall, for whom the Institute is named, was a retired cardiologist in Orlando, who had devoted his life to medicine, human rights and Jewish life. A longtime board member and community leader of the Anti-Defamation League, he fought against bigotry, discrimination and social justice for all.

"The Teacher Training Institute in the name of Norman Wall will help to bring the lessons of the Holocaust to Central Florida," said Harry D. Wall, son of the late physician. "He believed that the Orlando Holocaust Center has a vital role in community education, to not only raise awareness of the Holocaust, but also to confront the danger of rising extremism."

Through the generosity of Dr. Wall's late wife, Faye, and son, the 2018 Teachers Institute received the added support needed for its realization.

Attendees from five school districts participated; most teach high school grade levels, though there were some middle school teachers as well as university representation.

The Holocaust Center thanks Dr. Norman Wall and his family for support in the Teachers' Institute.