Sister City presents art to US Embassy in Jerusalem 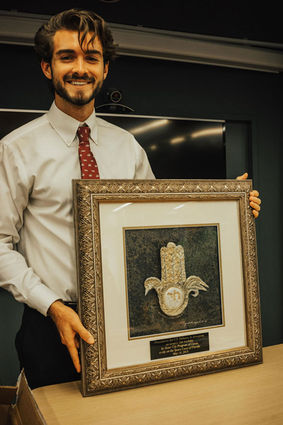 COCOA-Standing in the crowd on the day the US Embassy opened in Jerusalem was Theresa Miles, former director of The Sister City Program of Cocoa (Florida), and her family. She was in Israel to celebrate the country's 70th anniversary and enjoy a family reunion with her sons, Jordan and Brandon. She also carried a framed artwork that Rabbi Joel and Tali Fox of B'nai Shira in Cocoa Beach had commissioned Orlando artist Judith Segall to create for the new embassy and to honor Israel's 70th birthday on May 14, 2018.

Praising the close ties between Cocoa and Beit Shemesh, Israel, Jordan Miles, 21, from Merritt Island and now living in Jerusalem, presented the gift to the US Embassy in Jerusalem on June 25, 2018.

Lisa Bess Wishman accepted the art on behalf of the U.S. Embassy. She is the director of the American Center, where the art will be on display. The Center serves as an educational and cultural center with activities aimed at the Israeli public.

The art, "Hamsa-Chai-Dove" by Segall, uses symbols to express a hope for "Peace, Life, and Divine Protection." Segall said her creative process "goes beyond the basic elements of color, composition and form in order to provoke thought and evoke emotion."

Segall is deeply appreciative of those who commissioned her to do this artwork. "I wish to thank Rabbi Joel and Tali Fox of B'nai Shira (Cocoa Beach) for bringing this to fruition," she said.

The Sister City Program has a long-standing relationship between Cocoa and Beit Shemesh.

"Today we are gathered here to acknowledge a partnership, a friendship, and a long-term relationship between two cities, but more importantly two amazing countries," said Miles, who has spent the last year in Israel volunteering with the Bridges for Peace Zealots program to help new immigrants, Holocaust survivors and the poor. 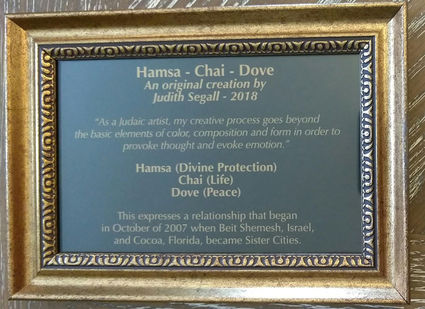 Miles visited Beit Shemesh in December 2016 as part of the Sister City Peace Ambassador Tour. Harley Stark, the director of International Relations for Beit Shemesh, praised the "remarkable friendship between two communities, separated by thousands of miles; but which are close together in each other's hearts."

"My mom wanted to create a living bridge between two cities: which is partnerships, genuine people-to-people relationships and friends for a lifetime," said Jordan Miles.

"We are so grateful for this opportunity to bless the people of Israel," said former Sister City Program director Ron Shelton.

Miles said, "from the Sister City Program we say thank you for giving us this opportunity to stand by your side through the good times and the bad and that we will always be here to support you."