Habonim Dror: Building a Zionist education about the 'occupation' 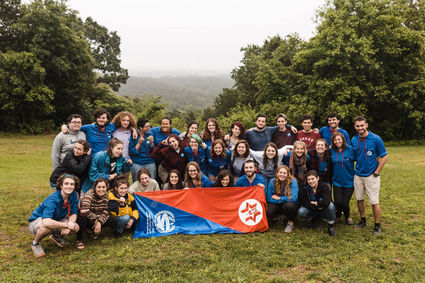 (JNS)-Several camp counselors from Habonim Dror were present at an IfNotNow Jewish summer camp counselor training session in Boston on May 27.

An organization that seeks to promote sympathy for the Palestinian narrative by encouraging fellow Jews to oppose the Israel "occupation," IfNotNow states on its website that its members "do not take a unified stance on BDS, Zionism or the question of statehood." Yet its critical statements against Zionist-aligned organizations, such as Camp Ramah, tell another story. Its overt and covert actions have been divisive in many circles, and criticized as subversive and counter-productive to the great majority of American Jewish organizations.

Eitan Goldstein, director and spokesman for Habonim Dror North America-a network of six summer camps and part of a wider worldwide Labor Zionist youth movement-said he was aware that Habonim Dror camp counselors were at the event, but confirmed that IfNotNow will not be part of any programming at their camps this summer.

While explaining Habonim Dror's unique, immersive version of Israel and Zionist education, Goldstein was exceedingly clear on one point: "Israel's right to self-determination remains affixed in our ideology and how we educate," he told JNS.

"It's clear to kids from day one that they are at a Jewish and Zionist camp, and that is central to the experience, whether they are singing Jewish songs or dancing. That is the entry point it terms of who we are and our shared history. We have a foundational starting point, which is important before we enter into discussing the conflict with a multiplicity of perspectives," he said.

"In terms of balancing out and bringing different perspectives into the room," Goldstein continued, "and maintaining our Zionist stance and identity, the way the conversations are framed is not with 'who's right' and 'who's wrong,' 'who's responsible and who isn't,' but that this story is a part of us-something that we can choose to be responsible for in terms of how we want Israel to look as young Jews. We want that to be an authentic responsibility, to give perspectives on the conflict in age and developmentally appropriate ways."

"I want to be perfectly clear that any nightmarish vision of 11- and 12-year-old campers learning about the horrors of the occupation all day long is simply untrue. Campers come in with varying levels of knowledge, some who have lived in Israel for all of their lives, and some who may not be able to point to Israel on the map. We offer these campers the building blocks to understand the complexities of Israel's reality.

Hebrew, (colloquially) for "the builders of freedom," Habonim Dror is a socialist, Labor Zionist movement that originated in Europe in the early 20th century. In 1982, Habonim, originally founded in 1929 in England, merged with Dror, founded in Poland in 1915.

Both organizations' rich histories as partners in the initial wave, and now modern aliyah stories, and the birth of the kibbutz movement are taught each summer to its more than 1,100 campers in North America, with the oldest age group (10th-graders) spending their last "camp" year in Israel. The Israel summer comprises a North American kvutza (age group) of approximately 100 campers drawn from Camp Miriam in Vancouver, Camp Gilboa in California, Camp Gesher in Ontario, Camp Moshava in Maryland, Camp Tavor in Michigan and Camp Galil in Pennsylvania. A smaller program in this same kvutza spend their summer in North America.

The camps are noteworthy in that they operate fully as "kibbutz" experiences, with each camper having a anaf "work group" as part of their responsibilities each day, such as taking care of animals, gardening, cleaning bathrooms or serving meals. Songs and idealized stories about Labor Zionism, socialist revolutions and past struggles of the Jewish people are taught along with the histories behind them.

Habonim Dror's alumni engagement numbers are impressive; most alumni exhibit a strong regard for Israel even years after their experience in the movement. A 2013 study by Professor Steven M. Cohen and Steven Fink found that 85 percent of the 2,000 Habonim Dror alumni surveyed had visited Israel more than once, and 70 percent have lived in Israel for at least five months. Some 49 percent were found to have contributed financially and regularly to a Jewish-sponsored or Israel-related organization that promotes social change.

'It's important to grapple with everything Israel is'

"We will be having a conversation with our staff in terms of what our Zionist education is," he said, "and it is certainly a part of those conversations every year."

"If we want young people to be taking responsibility for Israel, its present and future, [and] if we want youth to lead the way in ways that honors the Herzlian dream or the chalutzim ["pioneers"] and chalutzot in the early years before the State of Israel was established, it's important to grapple with everything Israel is, which includes the conflict," he said.

Goldstein explained that Habonim Dror's immersive experience is unlike other camping movements, particularly in how Jewishness and Judaism is experienced.

"One of the more powerful ways in which kids experience Judaism is not through practice, but the feeling of being part of a people-through speaking Hebrew, through learning about Zionism and Israel, and Jewish communities throughout the world, and through learning about the countries around the world that have active Habonim Dror movements," he said.

In fact, Goldstein said, in recent years, the thought-to-action concept of making aliyah has been worked into the movement's educational programming.

'How we're coming at the issue to begin with'

Anya Friedman-Hutter, who recently wrote an article about her experience in Hadassah magazine, explained why she decided to embark on aliyah. "From my first years at Camp Galil [in Ottsville, Pa.], I learned about hagshamah [realization, fulfillment]-that if I cared about something, I had to turn my feelings and dreams into actions. After years of leadership positions at the camp and working for the movement, I decided to form a garin [aliyah-bound collective] with my age cohort."

Friedman-Hutter's educational mission, as she refers to it, is to work in the local branch of the youth organization HaNoar HaOved VeHaLomed, Habonim Dror's sister movement in Israel. After the decline of the kibbutz movement in the 1990s, as a way of continuing the legacy, HaNoar HaOved VeHaLomed began exploring alternate life paths for its members, which had been focused on settling kibbutzim in garinim after their army service. The Habonim Dror model now follows the HaNoar model, which started to be put forward when graduates of the movement formed small urban communes working in society, particularly in education.

"We teach the responsibility to lead the Jewish people and the right to self-determination, the Jewish people being able to actualize what we have set out to do in terms of creating a peaceful, just society based on equality," Goldstein concluded.