In pursuit of state plates 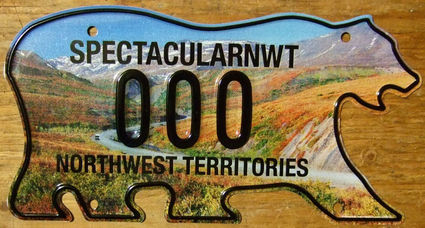 "Delaware!" my husband Larry yelled as we drove past a line of parked cars on Galena Street in Frisco, Colorado. "We got Delaware!"

In our life, "Getting Delaware" is a big deal. Within the first 10 days of our five-week search for license plates, we had gotten the license plate of the elusive Eastern seaboard state. Could Rhode Island be far behind?

Today, while heading for their annual family vacation, children sit in the back seats of a SUV watching Toy Story or Frozen from a strategically placed rear-seat DVD system. When our children Adam and Julie were young, high tech electronic baby sitters were not available. We resorted to supplying them with books and food and some random toys to keep them busy.

We also had aces up our sleeve. On long trips, I read them books-"Superfudge" and "Tales of a Fourth Grade Nothing" were the most popular. At night, we played P'Diddle. The first person to see a car with a missing headlight would yell the eponymous game's name. The winner could punch his/her sibling in the shoulder. (Of course, Adam and Julie liked punching each other.) And if all else failed, we would pull out our old radio show cassette tapes and listen to Burns and Allen, Abbott and Costello, and the Lone Ranger. Not a Disney or Pixar movie to be found. Amazingly, we managed to get through our trips!

For many years, our annual family vacation was spent at my parent's cottage on the New York side of Lake Champlain. The four of us would often take a day trip on the ferry from Port Kent to Burlington, Vermont. During those crossings, Larry encouraged us to check out the license plates. It became a game for us to see how many states we could find squeezed between bumpers. We could pick up 10 or 12 states, mostly from the northeastern part of the country. "Dad would become pretty obsessed about our finding those license plates," Julie recalled.

Our game continued when our vacations expanded to Cape Cod. We would find an occasional Georgia or even California, but most people who headed to the Cape were from the New England and Mid-Atlantic states. A family vacation to Acadia National Park gave us a chance to expand our repertoire. I think that Larry was as excited to find that license plate from Alaska as he was to see Cadillac Mountain and Thunder Hole.

We pursue the plates

The children went along with their father's fascination, but it wasn't until Adam and Julie were out of the house and we began traveling out west to several national parks that his interest in tracking down all 52 plates intensified, and I became his mostly willing pursuing-the-plates-partner.

Fifty-two? That is part of "The Official Rules of the Game." We are obligated to find all 50 states, including both the yellow and turquoise New Mexico plates, and Washington, D.C. We also track Canada's 10 provinces and three territories-including its newest Nunavut-as a bonus. (Bet many of you didn't know all that information about Canada! See how much you can learn plate pursuing?) Larry, the statistician, is in charge of keeping track of all our finds in his head and categorizing them by regions. I, the writer, am responsible for writing down each state as it is found and keeping the tally sheet with me at all times.

No matter how complicated the rules, we are always able to pick off the big states-California, Texas, and Florida-quickly. Non-contiguous Alaska and Hawaii are more difficult because of the distance-but we have found them almost every year. Washington, D.C., may be small in area, but anyone who has experienced the District of Columbia during the summer can understand why its 700,000 residents head out every July and August for cooler climes.

The small states are the most problematic. As noted above, a license plate from Delaware is a coveted prize, as is West Virginia and New Hampshire. And Rhode Island? Legend says that Rhode Islanders consider any drive that takes more than 20 minutes a road trip. The probability of a "Little Rhody" driving all the way to Colorado or Utah is slim. They usually are the last plates we find-if they are found at all.

Many of the plates have been spotted while we are on the road, usually with Larry-the designated driver-behind the wheel. Example: "Wait! Is that Maine in front of us?" Larry shouts. He then speeds up the car and gets closer to targeted car to confirm. "Yes! We got Maine!" We are lucky we haven't yet "got" a ticket for speeding or tailgating in the process.

And speaking of dangerous situations: Larry views every parking lot as a plethora of potential picks. He often takes circuitous routes through rows and rows of cars in search of an elusive New Jersey or West Virginia. I live in fear that my "Plate Patroller" will be so preoccupied in his hunt that he will get hit by a car backing out of a space. And sometimes, I am not afraid-just angry. As he usually has the keys to the rental car, I often find myself standing next to the locked passenger door, waiting in the rain or blazing heat or wind until Larry finishes his final scan and returns.

At times, Larry has resorted to tracking down the actual drivers. While carrying groceries into our Colorado rental, Larry spotted a family sporting University of West Virginia sweatshirts walking into the condo next to us. Larry tore after them to ask if they were from the Mountain State.

When they answered yes, Larry immediately followed up with the second, and more critical, question: "Did you drive your own car?"

A few times, our search has yielded hidden treasures. We were walking into a Kansas City Royals vs. San Francisco Giants spring training game in Surprise Stadium in Arizona when Larry saw a license plate from Canada's Northwest Territories. Not only was it the first time we had ever spotted a plate from that far-flung Canadian region, but also it was shaped like a polar bear! 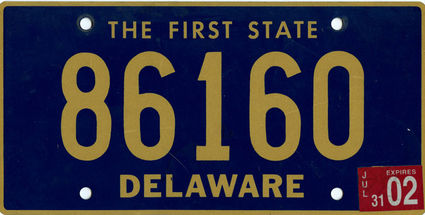 We had another exciting find at Bahai Honda Key in Southern Florida, when we spotted a license plate from Germany. The owners-a young couple from Munich-had shipped their old Volkswagen van over to United States. After time in the Keys, they were continuing their journey through Mexico and Central and South America.

Now that we have Delaware, we only have eight more plates to go: non-contiguous Alaska and Hawaii; New England's New Hampshire, Rhode Island, and Vermont; Washington, D.C.; and West Virginia. Luckily for us, we have three more weeks in Colorado to find them. Wish us luck!

Update: An hour before I was to send this out, Larry found New Hampshire and Chihuahua, Mexico! Wow! Only seven more to go!