The many facets of immigration 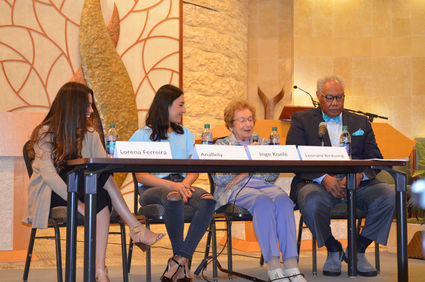 The Holocaust Center hosted a forum in response to current events related to immigration on Tuesday evening, July 10. The panel discussion was designed to give insight into the immigrant experience. The evening was heartfelt and honest.

Discussion centered around what compelled Holocaust survivors and others to immigrate to America. Inge Koele, a Holocaust survivor who came to the United States by way of Columbia, was also on the panel and shared her experiences.

What is the American dream? There was discussion about the Deferred Action for Childhood Arrivals program, know as DACA. Two of the women on the panel, Lorena Ferreira and Anallely (who did not want her last name used) are in the DACA program. They candidly spoke about the situation they are now facing. The program is a American Immigration policy launched in 2012 by the Obama administration calling for deferred action for certain undocumented young people who came to the U.S. as children. DACA allows young people who were brought illegally to the United States as children, and who meet several key criteria to be considered for temporary relief from deportation or from being placed in removal proceedings. However, DACA does not provide lawful status. Once granted, DACA is valid for two years and may be renewed. Individuals granted deferred action will also be eligible to request employment authorization. DACA applicants go through extensive background checks, and it is granted on a case-by-case basis. USCIS began accepting applications for the program on Aug. 15, 2012 (www.usimmigration.org)

Other topics discussed included: How would these families and individuals have been impacted if they had not built a new life in America? What would America look like without them? "We are all immigrants, and it is our duty to love one another and protect one another," stated Anallely.