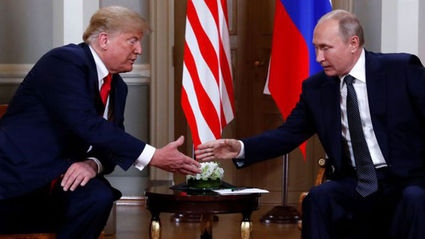 According to various news sources, US President Donald Trump and Russian President Vladimir Putin have agreed to work together to ensure Israel's security with regards to the advancement of the Syrian regime against rebels near the Golan Heights.

This discussion came about after Israel's Prime Minister Benjamin Netanyahu visited with Putin last week to demand that Iranian forces leave Syria. Netanyahu said he spoke to Trump on Saturday concerning "security and diplomatic issues in light of developments in the region, with Syria and Iran first and foremost, of course."

Putin said Trump had spent a lot of time talking about Israel during their talks at the summit.

"We both spoke with Bibi (Israeli Prime Minister Benjamin Netanyahu) and they would like to do certain things with Syria having to do with the safety of Israel," Trump told a joint news conference. ""Creating safety for Israel is something both Putin and I would like to see very much."

Much of the talk was addressed to concerns about Israel. And even though the US and Russia have taken opposing sides in the Syrian war, conditions were set in place for co-operation. Trump also stated that the US wants to help the Syrian people on a "humanitarian basis."

Putin added that all conditions are in place for effective cooperation on Syria, calling for enforcement of the 1974 Israel-Syria Separation of Fores Agreement to bring peace to the Golan Heights.

"Prime Minister Benjamin Netanyahu welcomes the deep commitment of the United States and President Trump to Israel's security, as expressed in the meeting between President Trump and President Putin. The friendship between Israel and the US has never been stronger," a statement from the PMO reads.

"Prime Minister Netanyahu also greatly appreciates the security coordination between Israel and Russia and President Putin's clear position on the need to implement the 1974 separation agreements between Israel and Syria," the PMO adds

Haaretz, Reuters, Times of Israel and jpost.com contributed to this report.