Call for EU to recognize Israel's sovereignty over Golan Heights 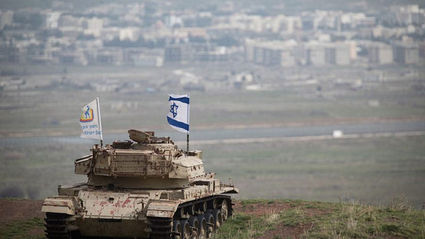 An old Israeli tank with a flag overlooking the Syrian town of Quneitra in the Golan Heights.

(EJP via JNS)-A member of the European Parliament has called on the European Union to recognize Israel's sovereignty over the Golan Heights.

"It is in the interest of the European Union to stop considering the Golan Heights as an 'occupied territory' and to recognize Israel's sovereignty over this territory," said Fulvio Martuscello, Italian MEP who chairs the European Parliament delegation for relations with Israel.

The E.U. considers the Golan Heights as "occupied territory" by Israel since the country took over the region from Syria in the closing stages of the 1967 Six-Day War. The Golan Heights has a strategic importance for the country, as it gives Israel an excellent vantage points for monitoring Syrian movements. The topography provides a natural buffer against any military thrust from Syria. The area also provides a third of Israel's water supply.

Despite its official neutrality in the Syrian conflict, the State of Israel has provided humanitarian aid to Syrian war victims, an effort that has been drastically geared up since June 2016, but it has also  strongly opposed the presence of Iranian military or of its proxies.

According to MEP Martusciello, recognizing Israel's sovereignty over the Golan Heights "will give trust to the E.U. as a broker in the Middle East peace process and even a potential to use it as leverage."

"In a time where the E.U. is receiving refugees escaping the war in Syria it is time to take a clear position and recognize the importance of having Israel as the de jure sovereign of this territory," he added.

For Martusciello, the European Union "needs to reinforce its engagement with the State of Israel.''

"We have seen a turbulent region where Israel has been an oasis of democracy despite the tensions with the Palestinians and the situation in Gaza," he said.