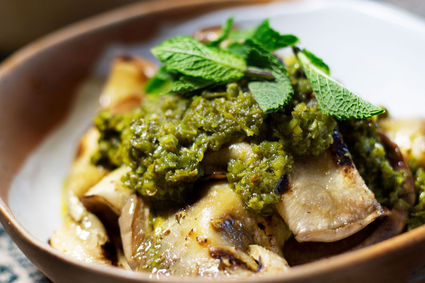 (The Nosher via JTA)-From bulbous and egg-shaped to small and thin, the eggplant (or if you're British like me, the aubergine) is a staple fruit within Sephardic Jewish cooking. Originating in India or perhaps even China, eggplant seeds are thought to have traveled along the Silk Road into the hands of Jews and Arabs as early as the 18th century. From there, eggplant has been used so often in Jewish cooking that some refer to it as the "Jewish apple."

Eggplant is now enjoying a wonderful resurgence, particularly in Israel, where it is enjoyed in countless salads or served whole and roasted topped with meat, tabbouleh and often gobs of nutty tahini. No meal in Israel seems complete without a portion of smoky, roasted eggplant.

It's so incredibly versatile: Eggplant can be stewed, stuffed, pickled, roasted or grilled. Historically known for its bitterness, modern varieties don't necessarily require salting, although I always do just in case any bitterness remains, and especially when grilling, as this will reduce the amount of oil that is soaked up.

In this recipe I serve eggplant with a North African spice paste called chermoula, which is herby, rich and pungent. This fantastic sauce is begging to be made when the weather is warm and the plates move outside.

Chermoula-a marvelous mixture of coriander, parsley, chili, paprika, garlic, cumin and olive oil-is a Moroccan, Tunisian and Algerian mainstay. While it is traditionally served with fish, I love it with grilled meats, fish, veggies or even couscous.

2. Next, cut the eggplant lengthways into 1/2 inch thick slices. Cover with salt, layer in a strainer and leave to drain for 40 minutes.

3. While the eggplant is draining, make the chermoula. Put all the ingredients with only 4 tablespoons of the olive oil into a food processor with a good pinch of salt. Blend to a thick paste and stir in enough of the remaining oil to make a sauce.

4. Pat the eggplants dry and in batches, brush with oil and in a griddle pan, grill over a medium heat for 5-6 minutes each side, until golden. Keep warm in the oven while you cook the remaining slices

5. When all slices have been grilled, lay on a platter and dollop with chermoula, a sprinkling of coriander and pinch of sea salt. Serves 8-10.

Ali Alt is a food writer, blogger and partner to her husband, Jonathan, the founder of the Farmer J restaurants in London. Follow her blog at http://www.Baliboosta.com and on instragram, @baliboosta.

The Nosher food blog offers a dazzling array of new and classic Jewish recipes and food news, from Europe to Yemen, from challah to shakshuka and beyond. Check it out at www.TheNosher.com.