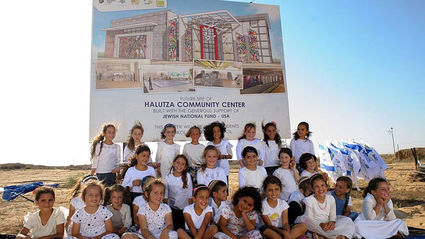 Children of Halutza sit in front of the site of the new state-of-the-art Halutza Community Center.

(JNS)-Quite literally among the booms and billows of black smoke across the nearby Gaza border, deep in Israel's southern Negev Desert, the new community of Shlomit laid a cornerstone and broke ground for their future community center. The new structure will serve not only Shlomit, but the entire Eshkol region in southern Israel.

A mere 700 meters from Israel's border with Egypt and just a few kilometers from Gaza, Shlomit and the other budding communities of Halutza are defying the odds and showing that they, and the people of Israel, are here to stay.

"Building a community center on the border here [with Gaza] says it all," says Gadi Yarkoni, the mayor of Eshkol. "That's how you show the enemy that you've won."

Indeed, this show of life and vibrancy is Jewish National Fund-USA's (JNF) goal in the face of trying, tense times.

In the presence of distinguished guests, including Yarkoni, Knesset member Nurit Koren, the World Zionist Organization's Settlement Division regional director Itzik Bar, JNF CEO Russell F. Robinson, JNF Chief Israel Officer Eric Michaelson and Ron Werner, a member of JNF's national board of directors, members of the Shlomit community planted trees in their soon-to-be first permanent neighborhood. The occasion was made even more joyous with children "singing" "Hallelujah" in sign language, and guest speakers recounting the inspiring story of a new community that was sand dunes and dust a mere decade ago.

"Eleven years ago, we stood on a hill in this area looking out at nothing but sand, and a man with a bit of meshugana said that he will build three communities here. This is the outcome," said Robinson as he gestured to the attractive new houses dotting a horizon that abut parks, playgrounds, scores of greenhouses and the plot of land where the new community center will be.

'We will continue to blossom'

JNF's partner Halutza is a group of three communities, headed by that "meshugana man," Rabbi Eli Adler. It's made up primarily of former Gush Katif residents who were evacuated from their homes during Israel's 2005 disengagement from Gaza.

Given a choice to move elsewhere, families rebuilt their lives in this area of the desert that had never been inhabited or farmed. After a little more than 10 years of hard work, Shlomit is taking shape and driving change in the region, showing that growth and development are possible in even the most remote areas of the Negev.

Tzvi Yehuda Halevi, 31, a father of four and a founding member of Shlomit, commutes three hours roundtrip to work every day to central Israel. But his participation in this community is second-nature to him and his family. As he put it: "We wanted to take part in a mission to give back to the Israeli people and to continue to settle our land."

The groundbreaking of the Shlomit community center is important-not just as a sign of endurance in an embattled region of Israel, but as a critical source of services for the entire Eshkol region, as it will include classrooms and communal spaces, and provide learning opportunities, extracurricular activities and programs for all of the region's residents.

The event, at this particular time in Israel's history, made a poignant statement, according to those involved-one that echoes throughout the region as terrorists continue to try to literally "burn out" Israelis from their border towns.

"The growth and development we are witnessing in Halutza has a special emotional appeal for American Jews who support these efforts," says Robinson. "It is also a loud and clear symbol that says, 'We are here to stay, and we will continue to blossom!'"