Camp J middle school campers and staff pose with a few of the Brookdale Lake Orienta residents who came to a recent Jewish Pavilion intergenerational program.

The seating areas in the light-filled lobby and commons of Brookdale Lake Orienta were abuzz with youthful energy on a recent Wednesday when a group of more than 40 middle schoolers from the Camp J's Tayarim (Travelers) program came for an afternoon of games and socializing with the residents.

With so many middle schoolers, there were also opportunities for them to share some cell phone expertise with interested seniors. An impromptu dance party and a little karaoke lent the program some musical energy, courtesy of the sound system brought in by Jewish Pavilion Intergenerational Program Director Walter Goldstein.

The modern beats helped to break the ice and made for a festive atmosphere. For many of the kids, the senior living facility was an unfamiliar setting, and the initial mood was much more subdued as the group sat and waited for more of the seniors to arrive.

That's typical of kids in this age group, said JCC Youth and Camp Director Kacie Zemel. When they are in a new situation, "they have to quickly think, 'Am I too cool for this or is this something I can really get into?'" she said. "The minute that the ice is broken they come out of their shells."

The seniors who attended the intergenerational program were very receptive to the campers and were clearly very pleased to connect with them individually. Goldstein, who oversees similar programs throughout the school year with Hebrew school and youth group children at other senior living facilities, said that the programs are popular with the seniors he serves.

"Besides the fact that it's just a change from the norm, the middle schoolers' energy, their excitement over things, is actually a little contagious," Goldstein said. "So it helps to reenergize the seniors-it gives them a little excitement during the day." 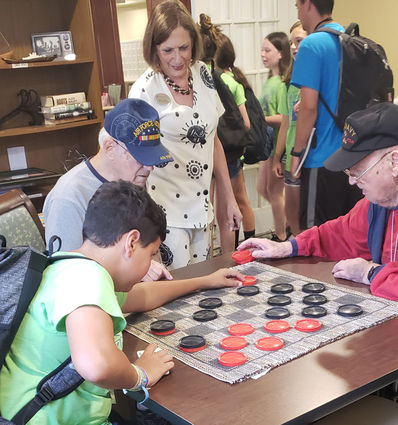 Brookdale Lake Orienta's Mary Vindett looks on as residents challenge a camper to a game of checkers.

For the kids, said Zemel, "they enjoy going to an assisted living facility because it reminds them to respect elders, it reminds them that there is a whole world outside of just their family and that there's opportunities for them to give back and share their knowledge."

While the other Camp J Tayarim community service projects are important and relevant, there's a special bonus for the middle schoolers in the intergenerational program, said Zemel. She said the kids always return to camp energized and feeling good about the experience.

"When you're sitting with the seniors and you see them smile, or my kids make a joke and the senior is laughing, there's instant gratification that they're doing something with their time," she said. "And that makes the difference."