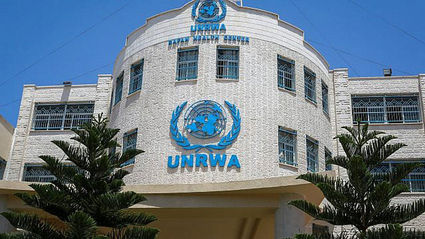 View of the United Nations Relief and Works Agency building in Rafah in the southern Gaza Strip, July 26, 2018.

(JNS)-New legislation introduced in Congress recently is seeking to make American aid to the United Nations Relief and Works Agency, the U.N. refugee agency that is solely dedicated to the Palestinian refugees, contingent on reform.

According to the legislation, introduced by Rep. Doug Lamborn (R-Colo.), the "UNRWA Reform and Refugee Support Act would return UNRWA to its original framework and address this false narrative of an inflated refugee population."

The bill seeks to make U.S. funding available to UNRWA to the extent that it resettles the original refugees from 1948.

"Those original refugees must meet the standards in section 101(a) of the Immigration and Nationality Act, which is how American law defines refugees. This will reduce the Palestinian refugee population from the inflated 5.3 million to an estimated 40,000," the bill says.

Lamborn told JNS that UNRWA's wide definition of refugees has made a "mockery" of other refugee situations across the world.

"UNRWA's twisted definition of refugee has made a mockery of both those who are true refugees in various conflicts around the world and those who are truly living in horrible conditions throughout the region, such as Syria," he said.

"It is time to return UNRWA to its original framework and that is what H.R. 6451, the UNRWA Reform and Refugee Support Act, would do. This bill would ensure that U.S. taxpayer dollars dedicated to refugees only contribute to UNRWA to the extent that it resettles the original refugees from 1948-not their descendants, who UNRWA also claim to be refugees."

Unlike all other global refugee situations, which are handled by the U.N. High Commissioner for Refugees, self-described displaced Palestinians and their descendants have had their own dedicated U.N. agency to provide education and social services to refugees scattered throughout the Middle East-mainly in Lebanon, Jordan, Syria, the West Bank and Gaza.

According to UNRWA, when the agency was launched, it provided services to about 750,000 refugees. But since Palestinian refugee status is "inherited," that number has grown about seven-fold to some 5.2 million today.

Until earlier this year, the United States had been the largest donor to UNRWA, providing more than $355 million to the agency in 2016. However, U.S. President Donald Trump slashed contributions to the agency by approximately 80 percent to around $80 million.

The legislation was announced last week at the annual Christians United for Israel (CUFI) conference, which has fully endorsed the bill as a means to help solve the Palestinian refugee situation.

"UNRWA perpetuates the Palestinian-Israeli conflict by keeping the Palestinians captive as eternal refugees. Those educated on the issue, who truly aim to solve these crises as opposed to enable it, should support UNRWA reform and back this bill," said CUFI founder and chairman Pastor John Hagee told JNS.

Asaf Romirowsky, executive director of the Scholars for Peace in the Middle East nonprofit and co-author of the 2013 book "Religion, Politics, and the Origins of Palestine Refugee Relief," told JNS that UNRWA reform is long overdue.

Romirowsky said that UNRWA's own "coercive soft power" on international politics and media have help shield the organization from scrutiny.

"This has been done in large part by members of the 'refugee' population itself working within UNRWA, with the help of the senior international managerial staff. By acting as a pressure group, the organization has thus been able to extend its mandate, and ward off oversight and reform," he said.

"It might also be asked whether UNRWA's prerogatives and operations also constitute a deliberate infringement on the sovereignty and legitimacy of the Palestinian Authority."