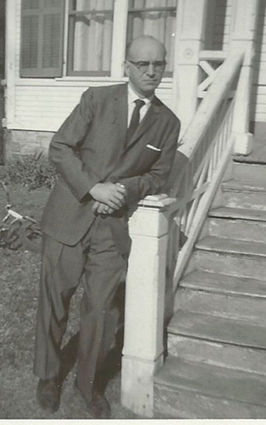 Wilfred "Bill" Cohen, the author's father, in front of the family home in Keeseville in the early 1950s.

Since the year that we met, my husband, Larry, and I attend Rosh Hashanah services. We hear the shofar, listen to melodies that we only hear on the High Holy Days, and greet our friends with L'Shana Tova-Have a good year!

Attending High Holy Day services as an adult is different from my experiences as a child growing up in Keeseville, N.Y., a small upstate town of two thousand people about 90 minutes south of Montreal. My Uncle Paul had opened Pearl's, one of a chain of small department stores he had established in Vermont and Upstate New York. He hired my father to manage it. Although my parents had both grown up in New York City in Jewish neighborhoods, they had lived most of their married life in overwhelmingly Christian communities. In 1952, however, they found themselves in a town where they were the only Jewish family except for a childless couple, a lawyer and his wife. The next Jewish family didn't move in until the mid-1960s.

To offset the effects of our non-Jewish environment, my parents immediately joined Congregation Beth Israel, a Reform temple in Plattsburgh. We attended High Holy Day services and, depending on the weather conditions for the 15-mile drive, Shabbat services on Friday night. Saturday services were only held for the boys' bar mitzvahs; all the girls were confirmed at age 16.

In addition to attending services, my parents were insistent on their children getting a Jewish education. For a span of 20 years, our father made the trip up Route 9 every Sunday with whatever number of his children between the ages of five to 16 were taking religious school lessons. We would arrive in Plattsburgh a half hour early. Then Dad would take us to the newsstand across the street from the temple on Oak Street. He purchased the New York Times for himself and comic books for us, our perk for going to Sunday school. My brother, Jay, chose Superman, Laura and Bobbie, Archie, and Richie Rich; and I chose Classics Illustrated. Dad would then wait for us in his idling car-it got cold in that parking lot in the winter-reading the paper and smoking Kents. Over the years, all of us learned Jewish history, customs, and ethics. Jay learned Hebrew for his bar mitzvah. The three of us girls' Hebrew education was limited to the six-word Shema and blessings over bread, candles and wine. When we got home from school, Mom would have an elaborate dinner waiting for us-brisket, roasted potatoes, candied carrots, pickles, and delicious spiced apples from a jar-another perk for our going to Sunday school.

As residents of Keeseville and members of a temple in Plattsburgh, we were caught between two worlds. As we did not live in Plattsburgh, we often viewed ourselves as outsiders at Temple Beth Israel. My mother, in particular, did not feel comfortable with many of the congregants. A daughter of poor Russian immigrants, she often felt inferior to those who were third or fourth generation German Jews who historically regarded themselves as more educated and refined than those from the shtetls-the small towns with large Jewish populations which existed in Central and Eastern Europe before the Holocaust.

The residents of Keeseville were generally welcoming to our family, and we rarely experienced anti-Semitism. There were moments, however, that are etched in my memory. My parents were usually included, but there were occasional "lost" invitations to events, and we knew some viewed us as different. On rare occasions, the insults were more direct. When I was around six years old, I was playing on my front lawn with my doll. A teenaged boy who lived up the street came by and, giving the Nazi goose salute, yelled "Heil Hitler!" I ran inside crying. Jay, four years older than I, ran out of the house to chase him down and punch him in the nose. When Jay was in high school, the local priest advised his young female parishioners that it was best not to date "Hebrews." Obviously, this did not help Jay's social life.

The High Holy Days emphasized this "otherness" even more strongly. We did not attend school on Rosh Hashanah and Yom Kippur. My father closed the store, an event worthy of coverage in the Essex County Republican. Jay, who played football for Keeseville Central, missed every game that fell on the two major fall holidays, again newsworthy enough to make the local paper.

Everyone in Keeseville knew that the Cohens celebrated their Jewish High Holy Days, but I was still sensitive to our being the only children missing school. One Rosh Hashanah, I was pushing my doll carriage in front of the house when I was overcome with embarrassment. What if someone saw me and wondered if I were playing hooky? I went inside to avoid the potential scrutiny and a visit from the truancy officer.

My feeling of "otherness" continued as the seasons changed. Beginning in November, I often had to explain that Chanukah was not the "Jewish Christmas," and no, we didn't have a Christmas tree or a Chanukah bush. As soon as we returned to school from the Thanksgiving break, the music classes I attended and, later, the choruses I joined in junior and senior high were filled with Christmas music. I could handle "Little Town of Bethlehem" and "Deck the Halls." When it came to the line in "Silent Night" which stated "Christ the Savior is born," however, I would just mouth the words. The token inclusion of the song "I Had a Little Dreidel" didn't make me feel that the school was sensitive to my religion and culture.

Other events brought their challenges. Passover often fell around Easter, and I watched my Christian friends devour bunny shaped chocolate eggs and jelly beans while I nibbled on my dry matzoh and butter. Once again, I felt different. In high school, my World History textbook reduced the Holocaust to the iconic 1943 picture from the Warsaw Ghetto of a German soldier pointing his machine gun at a little boy, clad in a coat with the yellow star, holding up his hands in terror. I can still remember looking down and crying silent tears while the teacher quietly and sympathetically moved on to the next topic. I understood clearly that the horror of the persecution of the Jews was diminished by this negligible treatment of the Holocaust in our textbook.

For many years, I saw other Jewish children mostly at Sunday school. As I got older, I joined a Jewish youth group and finally had Jewish friends. For the most part, however, our friends were our Christian classmates from Keeseville. We all dated in high school, but my parents pressed upon us their wish we would leave Keeseville after we graduated and make our lives in settings with more Jewish people.

In part because of my desire to be with other Jews, I enrolled in University of Albany in 1968. While at college, I attended High Holy Day services at Congregation Beth Emeth, but that was the extent of my Jewish participation until I met my future husband in 1973.

Larry and I attended High Holy Day services at Congregation Shaara TFille, the then-Orthodox shul in Saratoga to which his family belonged. What a dramatic difference for me! Men sat in the center pews, and the women, although not behind a mehitzah, (a curtain which separated the men from the women), sat in the back or on the sides. Most of the service was in Hebrew, and everyone prayed at what seemed to be lightning speed. Page numbers that were displayed on a chart on the bima provided my only means of following along with the prayer book. The services were much longer than those at Temple Beth Israel, and even the rabbis, with their black beards, payots (side curls), and yarmulkes (skull caps), were strange to me. In many ways, it was as foreign to me as the churches I had attended on occasion with my Christian friends.

After Larry and I were married, we bought a home in Clifton Park, a suburb of Albany, New York, in part because we knew that a synagogue had recently been built in the community. We joined in 1983, and we found that the Conservative service was a good compromise between Larry's Orthodox shul and my Reform temple. Ten years later, I celebrated my own bat mitzvah on my father's 80th birthday, my way of honoring his commitment to our Jewish education.

Throughout my life, people assume that I was brought up, like many Jews, "downstate," in New York City or Long Island. When I tell them about growing up in Keeseville, they comment, "That must have been hard!" 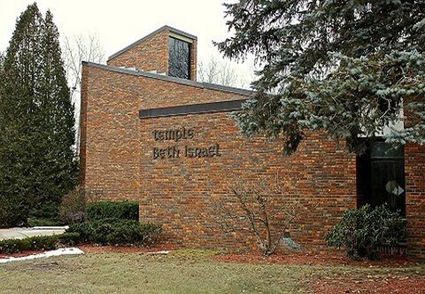 Temple Beth Israel in Plattsburgh where the author and her brother went every Sunday for Sunday school.

It had its challenges, but it also offered wonderful opportunities. I grew up in a loving, close-knit family, developed lifelong friendships, and enjoyed the beauty of Lake Champlain and the Adirondacks. I proudly identify myself as an Upstate New Yorker, with roots still entwined in that tiny town an hour south of the Canadian border.

Because of my unique upbringing, rather than losing my Jewish identity, my faith grew stronger. I could never take being a Jew for granted. And having a faith I had to hold on so tightly to maintain makes each High Holy Day, each Jewish milestone, even sweeter.