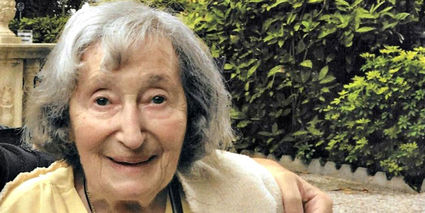 I also just received a message on my cell phone that said U.S. Senator John McCain has died. How sad! I had so much respect for Senator McCain, he will be sorely missed by me and by the entire country (and maybe even the world.) May he rest in peace.

I read this recently about the murder of a Holocaust survivor (that I wrote about in one of my columns recently) and I pass it along to you:

"Two men have been indicted for the murder in March of 85 year old Mireille Knoll, a handicapped Holocaust survivor, who was found dead in her Paris apartment. She had been stabbed 11 times and set on fire. One of those arrested was a 27 year old neighbor of Knoll whom the victim had known since he was seven years old.

Shortly after, the Paris Prosecutor's Office opened an official inquiry for 'murder motivated by the real or presumed religion of the victim, and against a vulnerable person.' Leaders of the Jewish community insisted that authorities treat the killing as an anti-Semitic hate crime.

More than 650 million people from 155 countries were reached in the World Jewish Congress 2018 "We Remember" campaign, which urged people to photograph themselves holding a sign reading #We Remember, post the image to social media and share.

The campaign, which included heads of state, celebrities, religious leaders and average citizens, culminated on International Holocaust Remembrance Day with participant photos streamed live on a projection screen on the grounds of Auschwitz-Birkenau.

Give yourself a break...

The young-uns will have activities, games, crafts, dinner, and a movie!

(But you knew that already.) I also love my dog's primary care doctor, CHANTAL M. JONES, D.V.M., at McAbee Veterinary Hospital. She is loving, skilled and just perfect! (I want her for my primary doctor!)

Oh yes... if you want to help homeless pets, please give to your local shelter.

The Jewish Pavilion gives special thanks to EMILY NEWMAN who worked as a program director for the JP for seven years and a program assistant for three years. She also staffed the Orlando Senior Help Desk for several years, answering calls and providing advice to hundreds of families.

Over the years, Emily has developed positive relationships with more than a thousand seniors in elder care. She has touched their lives and brought them joy. Some of the people she visited in skilled nursing had no family and Emily was their only contact outside of their building.

Emily made sure that elders were not forgotten by the Jewish community, She insured that they were visited and participated in Shabbat and holiday festivals. Emily coordinated a team of dedicated volunteers who served as companions, service leaders, musicians and mahjong players.

NANCY LUDIN, executive director of the Jewish Pavilion, said that Emily was very devoted, talented, efficient, bright and reliable. She developed very positive relationships with seniors, staff in facilities and volunteers. Emily will be succeeded by SUSAN BERNSTEIN, who was an incredible volunteer for the Jewish Pavilion for many years. Ludin added, "We are so thankful that Emily was able to train Susan and be available to answer questions and provide direction as new situations arise.

(Emily is much more than a mensch... maybe a SUPER MENSCH!!)

Lately I've been to TooJays in Altamonte Springs, because I love their matzo ball soup. The latest waiter was JOHN HUFF, an efficient, pleasant and caring server... and also a handsome guy! (I can say that because I am elderly!)

There will be no Cinema Sunday film on Sept. 9 as it is Erev Rosh Hashanah.

On Terrific Thursday, Sept. 13, in the JCC Senior Lounge at 1:30 p.m., there will be two book reviews directed by LOIS LILLING.

"Moving Day" by Stone and "The Seven Sisters" by Lucinda Riley. 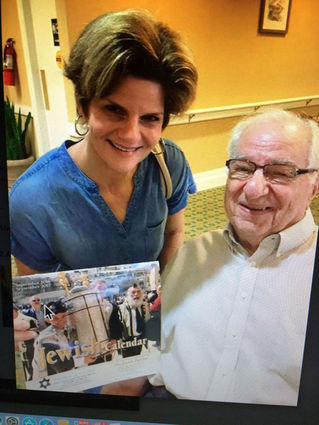 Moshe was at his golf club and went into the clubhouse to see whether anyone could offer him a lift to his home. His own car was off the road being serviced.

"Sure," said Morry, "I'll give you a lift. My Rolls Royce is just outside."

As they're driving along, Moshe says, "Morry, what's that thing on the dashboard ticking all the time?"

A few minutes later, Moshe asks, "And what's that thing on the dashboard moving up and down?"

Then a few minutes after that, Moshe starts to ask, "But what's that..."

"Hold on a minute, Moshe," says Morry, "I can see you've never been in a Rolls Royce before."