When an 'unruly' crowd defied the Nazi boycott 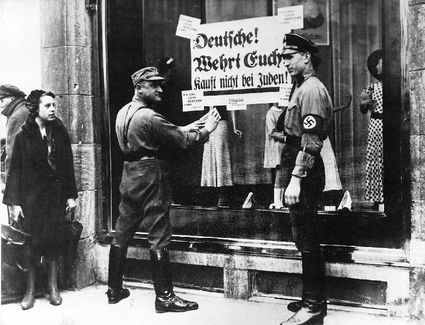 Shortly after the Nazis assumed power, discussions within the German Ministry of the Interior led to proposals of a new citizenship law that would distinguish between formal "state citizenship" and a soon to be created "participatory citizenship" that could only be acquired through service to the state in such Nazi organizations as the NSDAP, SA, SS, and "Deutsche Arbeitsfront"-a Nazi-run union and would by definition exclude "non-Germans" (understood as "Non-Aryans, ie. Jews)

Severe measures had already been taken to eliminate Jews from all positions of importance and curtail their rights as German citizens under special legislation. Attempts by the Danish minority organization to clarify this matter with the Ministry of the Interior received only answers indicating the necessity of distinguishing "Aryans" from "non-Aryans" in the determination of what was called "Reichsangehörigkeit" (belonging to the state). The constant threat of deprivation of their rights as German citizens hung over the Danish minority in the border region of Schleswig throughout the Nazi regime.

The only way for the Danish minority community in Germany to react was an editorial in the Danish language newspaper Flensborg Avis published in the largest city in the region (acquired by German conquest in 1864 from Denmark), warning of the possible consequences of such an action upon ethnic German minorities in other countries. One ironic consequence of the Nazi racist ideology to prove their "Aryan (i.e. non-Jewish) ancestry" was the rediscovery of some Schleswigers that the marriage or baptismal certificates of their grandparents or great-grandparents were in Danish or that family memorabilia such as diaries and letters revealed that in previous generations some individuals felt that their need to learn German and imitate the Germans to fully integrate within German society were impositions.

The ability of the organized Danish minority community in South Schleswig to stand steadfast against the Nazi juggernaut and maintain its own cultural life, schools, libraries, welfare assistance and the only non-Nazi newspaper in Germany from 1933-45 was due to their courage and tenacity in the face of constant harassment as well as official German government policy. This policy made necessary the formal respect of commitments based on the reciprocity of the Danish government toward the German-minded minority in North Schleswig.

An unintended consequence was that a tiny Jewish community in Flensburg, the major city in the border region a few kilometers from the Danish border, was able to take heart and prepare and organize for emigration or flight to Palestine or Denmark.

Aware of their tenuous position walking a tightrope, the Danish minority could not openly express the opposition of the overwhelming majority of its members to the regime's anti-Semitic policies. The editorial line of Flensborg Avis remained as it had been under the Weimar Republic that it did "not interfere in internal German matters."

The paper went further in asserting that it aimed to serve as a bridge between Germany and Denmark, a view which the editors felt even more essential after the Nazis came to power and in spite of frequent criticism from the press and left-wing parties in Denmark. No one of any standing in the Slesvig Forening SF (the official minority organization of ethnic Danes living in the northernmost German province of Schleswig-Holstein but under tight control by the Nazi authorities) or Flensborg Avis openly or "behind closed doors" approved of the Nazi Party's race laws, boycott of Jewish shops, anti-miscegenation laws, exclusion of Jews from public life, and deprivation of all civil rights culminating in the mass violence on "Kristallnacht" (Night of the Broken Glass) in 1938, by which time almost all Jews had left Flensburg.

It must be remembered that although the Nazis did not win an absolute majority in the last legal election held in Germany in 1933, they were the largest single party on the eve of their assumption of power, the combined electoral strength of the Social Democrat and Communist parties in many areas was greater. This was true in the province of Schleswig-Holstein where the Nazi Party had won overwhelming support from the rural population and many small farmers threatened with bankruptcy while the Social Democrats and Communists were strong in the larger towns (Kiel, Schleswig and Husum), and strongest of all in the border town of Flensburg where their combined strength and that of the Danish minority presented the Nazis with more of an obstacle than elsewhere to their usual smooth sailing over potential opposition.

A few local Jews were department store owners and shopkeepers with a tradition of excellent relations with the Danish minority. One of them, Herr Rath, was a faithful advertiser in Flensborg Avis and after being forced to leave Flensburg in 1935, expressed appreciation in a paid public notice appearing in the newspaper, thanking the community for its excellent treatment of him and his business. A Nazi-sponsored, anti-Jewish boycott in Flensburg in April 1933 ended with little effect as the Jewish shopkeepers retained almost all their customers who were quite unsympathetic to Nazi appeals and who offered them credit at a time when few others were willing to do so.

During the blockade of Jewish-owned shops patrolled by uniformed S.A. guards, an "unruly crowd" of Flensborgers broke through the picket line to carry on doing business. Flensborg Avis gave it full coverage. It is unlikely that any similar event occurred throughout Nazi Germany. Needless to say, the rival German-majority-owned newspaper, Flensburger Nachtrichten, downplayed the incident, burying it in inner pages of the paper, and enthusiastically supported the boycott.

From 1930 to 1938, Jews in Flensburg made use of a rented room for social events and meetings in the building of the Danish Community Center. Although sympathetic, there were clearly "limits" beyond which the Danish community could not openly express offers of assistance. Requests by Jewish parents whose children had been expelled from the German public school system were refused permission to transfer them to the Danish minority school. From 1934 to 1938, a "Hechalutz," (The Pioneer) Socialist-Zionist training farm operated in a Jägerslust, a country estate on the outskirts of Flensburg.

Good relations formed with local Danish-minded farmers were later utilized in helping German-Jewish teenagers reach Denmark and carry on their agricultural training in 1939-40. All of these boys and girls either reached Palestine or else fled to Sweden along with almost the entire Danish Jewish community in 1943. Alexander Wolff, the owner of Jägerslust, who had made his estate available for the Zionist training program, managed to emigrate to the United States. Wolff, who later received compensation and a monthly pension after the war from the Federal state of Schleswig-Holstein, was an invited guest of the Flensburg City Hall in 1966 and interviewed by Flensborg Avis.

Flensborg Avis was conspicuous among newspapers in Germany by its avoidance of editorial comment on Nazi anti-Semitism. It faithfully reported the anti-Jewish legislation without comment except for a few occasions when it dryly noted that these measures were designed by the government to uphold the "German sense of honor and racial purity." It must be also be borne in mind that the Danish government and its representative at the Danish consulate in Flensburg had warned the SF leadership and Flensborg Avis not to openly antagonize the Nazi regime or express sympathy on a community-wide level for Jews, Social-Democrats and Communists who had been forced out of public positions or had fled to Denmark.

This became even more acute after the Nazi prohibition against Flensborg Avis's German language daily supplement, Der Schleswiger, as a result of accusations that the paper had been openly circulated among groups of "disgruntled communist workers in Hamburg's harbor" who then had distributed it to "unscrupulous elements" and bookshops throughout Germany representing the anti-Nazi "Confessional Church," led by the Reverend Martin Niemoeller until his arrest together with more than 800 pastors in July 1937.

The Danish minority community in South Schleswig had thus been branded as an ally of the regime's opponents by some local Nazi politicians and German nationalist revisionist circles anxious to recover North Schleswig. With the accusation of aid to Communists, Social-Democrats and the Christian opposition hanging over their heads, it is understandable that the Danish Minority Community could not risk further charges of open collaboration with the Jews. 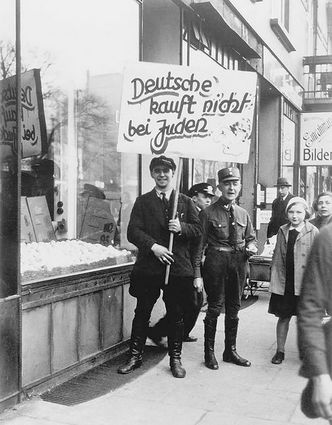 The ability of the South Schleswig Danes to withstand constant harassment was a product of their ethnic pride and tenacious Christian or Socialist values. It was also made possible by official German government policy that, at times, contradicted rabid local Nazi Party members intent on recovering "Lost North Schleswig" as an irredenta Hitler was anxious not to offend public opinion throughout Scandinavia by putting undue pressure on Denmark.

The unintended effect was that the local Jews had before them an inspiring example of their proud Danish neighbors who refused to bow to Nazi power and submerge their ethnic identity together with either strong Socialist or Christian values.

The challenge of today is that we are in danger of becoming totally absorbed by the problems of the moment. Only by maintaining our moral compass and remembering and teaching those values and traditions that have been an inspiration throughout our history can we resist the present threats to our civilization.