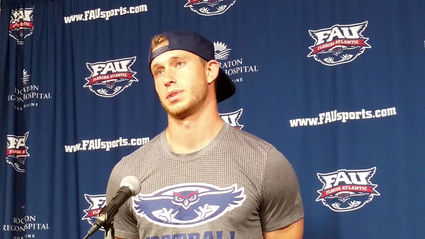 Joseph, a rookie, was previously a kicker in the Miami Dolphins training camp earlier in the summer. He signed with the Dolphins as an undrafted free agent after a collegiate career at Florida Atlantic University. Joseph was cut by the Dolphins at the end of training camp after he lost a camp-long competition with fellow rookie kicker Jason Sanders, a seventh-round pick. Joseph made all three field goal attempts with the Dolphins during the preseason, including a field goal of 54 yards.

Joseph left FAU as its all-time field goal leader and shares the school record for most extra points. Prior to playing in college, he was a member of a number of teams, including the football and soccer teams, at Donna Klein Jewish Academy from 2000 to 2009. He also kicked at American Heritage School in Delray Beach, Fla.

The Boca Raton native has been praised for his off-the-field charity word, and Joseph previously credited his mother, who is a teacher and head of the math department at a Jewish day school, for teaching him the values of giving back to the community.

NFL Network's Ian Rapoport was the first to report Joseph was signing with the Browns.

Joseph was signed when the Browns decided to move on from kicker Zane Gonzalez, who missed four kicks in a game against the New Orleans Saints on Sept. 16. Gonzalez missed two field goals and two extra point attempts, all in the second half, including a potential game-tying field goal of 52 yards.

ESPN's Adam Schefter reported on Sept. 17 that Gonzalez had been playing with a groin injury. Reporter Mary Kay Cabot of Cleveland.com said the Browns informed Gonzalez they were releasing him on Sept. 17.

Joseph won't have much time to become acquainted with his new teammates, as Cleveland hosts the New York Jets on Sept. 20.

"Obviously, we have to find someone that can put the ball through the uprights," coach Hue Jackson said after Joseph signed. "We have had this situation happen now for a couple of weeks. We have to keep searching and keep looking."

The Associated Press contributed to this story.