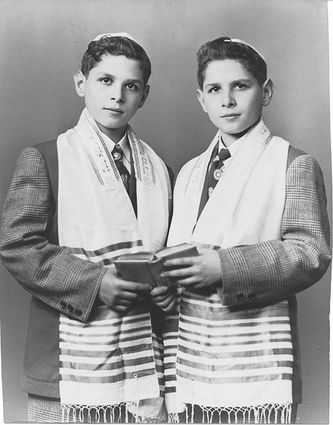 Herbert (l) and Martin Siegel at their bar mitzvah in 1948.

Twins Herbert and Martin Siegel, will be celebrating their 83rd birthdays on Oct. 24, 2018. What is more significant about this date is that it is also the 70th anniversary of their bar mitzvah. To honor this event, the brothers will again be called to the Torah to recite the traditional prayers and read the Haftarah portion on Saturday, Oct. 27, at 10 a.m. at Congregation Beth Sholom in Leesburg. Herbert will be wearing the same tallit that he wore for his bar mitzvah. After the service they are sponsoring a Kiddush (luncheon) for congregants.

The Siegel twins were born in Brooklyn, N.Y., to Saul and Sophie Siegel. They attended Erasmus Hall High School and then University of Miami, Florida, where they both graduated with a bachelor's degree in chemistry. They joined the Army in 1958 due to the draft. After one year they went to Officers Candidate School at Fort Sill Oklahoma and graduated as 2nd lieutenants-Hebert as an artillery officer and Martin as a chemical officer. 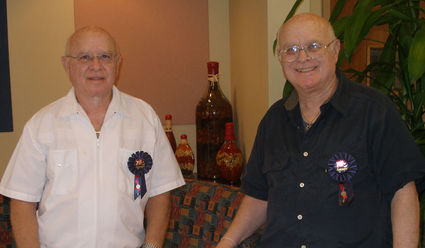 At that time, Herbert was married to Betty Israel and awaiting their first child. They decided to remain in the Army and after tours in Korea, Laos, Okinawa, Germany and many stateside posts, Herbert retired in 1983 with 25 years of active service. Herbert retired as a lieutenant colonel and then taught Junior ROTC at Miami Killian High School for 15 years. They retired again in 1998 to Kissimmee and then to the Villages in 2014.

Martin remained on active duty a few more years and then remained in the Army Reserves to complete 30 year of service and retired as a colonel in the Chemical Corps. While serving he had a very successful career as a formulation chemist with an international company (Ciba Geiga of Switzerland). He married Betty Dobin and has two sons. He currently resides in Niceville, Florida.