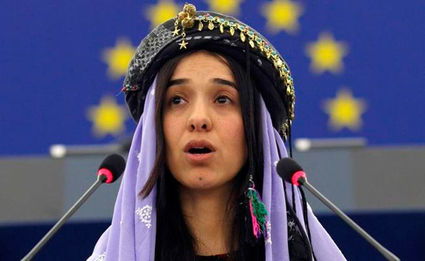 On Friday, the Nobel Peace Prize was awarded to Surgeon Denis Mukwege from Congo and 25-year-old Murad "for their efforts to end the use of sexual violence as a weapon of war and armed conflict."

Murad visited Israel in July 2017 when the Knesset held a memorial session in remembrance of the genocide conducted by the Islamic State against the Yazidis in Iraq in recent years.

The conference's main guest speaker was Murad, who, in August 2014, was captured by ISIS in her village of Kocho, Iraq, and sold into sex slavery. ISIS murdered six of her brothers and held her captive for months. She managed to escape, found her way to a refugee camp and was one of more than a thousand Yazidis accepted into a refugee asylum program in Germany.

Murad was appointed a Goodwill Ambassador by the UN last year as an advocate for her people. She is explaining to the world that the crimes waged against them must not go unpunished.

"This is not the first time people have used their power to destroy a group of innocent human beings, simply because of who they are. This is something you know all too well, and your families have had their own tragic and difficult journeys," she told the Knesset last year, referring to the Holocaust.

"We Yazidis are a peaceful people. Never in our 5,000 year history have we fought and killed others. But our peacefulness has not served us well," Murad stated. "We have faced 74 massacres, often motivated by extreme interpretations of Islam. And I'm afraid this genocide, the one that continues today, will be complete, if we are not able to return to our homeland. Yazidis strive for, but are given no say, in deciding the future of our homeland."

"I know that like the Jewish people, we have always survived. These experiences inspire us to hold onto our culture and identity. And importantly, our experiences drive us to stand up for others who are being persecuted, as you have chosen to do today. This is why I use my voice to speak on behalf of those who are silenced, like the 3,000 women and girls still in the hands of Daesh [ISIS] terrorists. My visit here today is to ask you to recognize the genocide being committed against my people, in light of our peoples' common history of genocide," she said.

Murad announce after winning the prize that she will share the award "with Yazidis, Iraqis, Kurds, other persecuted minorities and all of the countless victims of sexual violence around the world."

"As a survivor, I am grateful for this opportunity to draw international attention to the plight of the Yazidi people, who have suffered unimaginable crimes" under ISIS, she said.

"We must work together with determination to prove that genocidal campaigns will not only fail, but lead to accountability for the perpetrators and justice for the survivors," Murad concluded.

AP contributed to this report.