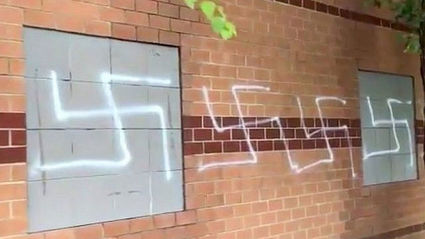 Swastikas on the JCC in Fairfax County, Va.

Building staff noticed the building had been vandalized when they arrived to open the facility at 7 a.m. Security camera footage showed a suspect defacing the center at around 4:30 a.m, and local authorities released photos to the public.

Virginia Sen. Tim Kaine tweeted that an "insidious rise in hateful actions and anti-Semitism" must be met with "fierce condemnation and an over-abundance of love and unity."

In 2017, the same JCC was spray-painted with the message "Hitler was right," swastikas and other Nazi symbolism.

JCC leadership released a statement saying, "as many of us recognize, these acts do not represent the community around the J[CC] or the community in Northern Virginia. The J[CC] as a whole, and particularly through the focused efforts of our Committee for a Just and Caring Community, will continue to participate as a positive force in both the Jewish and wider communities."