By Josefin Dolsten and Ron Kampeas

Nikki Haley, fierce defender of Israel, resigns as US ambassador to the UN 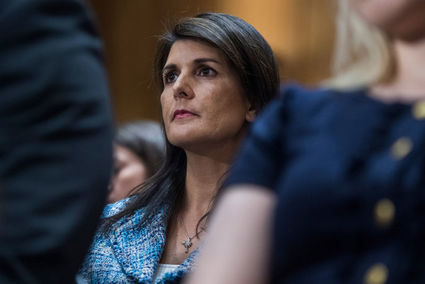 US Ambassador to the UN Nikki Haley

NEW YORK (JTA)-Nikki Haley, the U.S. envoy to the United Nations and a strong defender of Israel in the world body, will leave her post by the end of this year.

President Donald Trump in an Oval Office appearance with Haley on Tuesday morning praised the former South Carolina governor and said that about six months ago, she told him that she was ready to leave by the end of this year.

"She's a fantastic person, very importantly, but she's also somebody that gets it," Trump said.

The announcement has especially shocked supporters of Israel. "Whatever Trump may have gotten wrong, his choice of Nikki Haley as ambassador to the U.N. was a masterstroke," the Boston Globe's Jeff Jacoby wrote recently.

CNN has referred to her as "the breakout star" of Trump's cabinet.

Haley, a moderate on Trump's foreign policy team, had a warm relationship with Israeli Prime Minister Benjamin Netanyahu, who frequently praised her for criticizing what she saw as bias against the Jewish state at the U.N.

The most consequential actions she took had to do with Israel: She pulled out of UNESCO, the United Nations cultural affiliate, and pushed for the defunding of UNRWA, the agency that administers assistance to Palestinian refugees and their descendants. She threw a party for countries that did not vote to condemn the United States for recognizing Jerusalem as Israel's capital.

Haley at the Oval Office event said Trump earned international respect by delivering on his warnings, including on Iran and Israel.

"They get it when the president says he means business," she said. "If you look at the anti-Israel bias and the strength and courage the president showed in moving the embassy" to Jerusalem.

She especially praised Jared Kushner, Trump's Jewish son-in-law. "Jared is a hidden genius that no one understands," she said. Haley recently joined Kushner in shaping his Middle East peace proposal, which no one outside the small team has seen. "It is so unbelievably well done," she said of the proposal.

"She is a bold reformer and has been an unwavering champion of truth, principled realism and integrity within the United Nations," Ivanka Trump said on Twitter. "Jared and I are grateful for her friendship-a true blessing in our lives!"

"Her departure was unanticipated and took the pro-Israel community by surprise," Matt Brooks, the Republican Jewish Coalition CEO, said on Twitter. "Stunned and shocked by the surprise resignation of @nikkihaley as UN Amb. She was a consequential and impactful force at the UN."

She was the rare Trump Cabinet official who earned praise from Democrats.

"I want to thank Ambassador Haley for her willingness to express moral clarity to the world and to President Trump, and promote American values and leadership on the global stage, even when she lacked the backing of the White House or State Department," Sen. Robert Menendez, D-N.J., a pro-Israel leader in the party, said in a statement.

Israel's Prime Minister Benjamin Netanyahu in a statement thanked Haley "for leading an uncompromising struggle against the hypocrisy of the UN and for the truth and justice of our country."

Haley downplayed reports of tensions between her and Trump. Born to immigrants from India, she comes from the wing of the Republican Party that favors a robust interventionist foreign policy, while Trump is an isolationist.

Haley condemned another senior aide who favored foreign policy interventionism and expressed opposition to Trump in an anonymous op-ed in The New York Times last month.

"If I disagree with something and believe it is important enough to raise with the president, I do it," Haley wrote in her own op-ed in The Washington Post. "And he listens. Sometimes he changes course, sometimes he doesn't. That's the way the system should work."

The Washington scuttlebutt at the time was that Haley published the op-ed to squash rumors that she had written the original anonymous op-ed in The Times. It may have backfired; there were reports that Trump resented even the notion that his top staff disagreed with him.

In her appearance with Trump, she again denied ambitions of mounting a 2020 primary challenge against Trump.

If she changed her mind, Haley could tap into a Republican Jewish donor class that fetes her pro-Israel credentials and has never been wholly comfortable with Trump.

At least one hawkish pro-Israel voice was unabashed in making that wish.

"Thank you @nikkihaley for your remarkable service," Mark Dubowitz, the director of the Foundation for Defense of Democracies said on Twitter. "We look forward to welcoming you back to public service as president of the United States."

Separately, an ethics watchdog, Citizens for Responsibility and Ethics in Washington, criticized Haley this week for accepting $24,000 in private flights last year to her home state of South Carolina from a businessman friend.