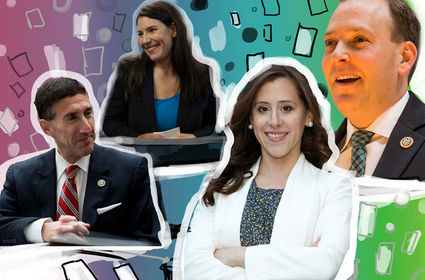 WASHINGTON (JTA)-There are 15 Jewish Republican candidates running in U.S. House of Representatives races this fall. Two are incumbents and 13 are challengers.

JTA is breaking down the races, assessing where the candidates stand on the political spectrum, noting their Jewish involvement and reporting what the forecasters say. Last week we covered the five Jewish Senate nominees, all Democrats. You can find a breakdown of the Jewish Democratic House candidates here.

These are all of the Republican House candidates, broken down by state and whether they are incumbents or challengers. (The prospects below are based on the 538 blog unless otherwise noted.)

Known for: His robust alliance with Trump, who has endorsed him. Zeldin, an Army veteran, has become a go-to TV talking head defending Trump from charges that his campaign colluded with Russia. Zeldin also embraces Trump's policies on stemming undocumented immigration and has sponsored legislation that would revoke the citizenship of Americans found to be members of gangs.

Jewish stuff: An email from the Republican National Committee sent to New York Jewish Republicans called Zeldin "perhaps the most important pro-Israel" member of Congress. He has joined and in some cases led numerous legislative efforts championed by the centrist and right-wing pro-Israel community, including bids to cut funding to the Palestinians. Zeldin was a leading opponent of the Iran deal.

Prospects: A 6 in 7 chance of keeping his seat.

8th District, parts of Memphis and western Tennessee, in Congress since 2017.

Known for: Law and order. Kustoff, a former U.S. attorney in Tennessee, has initiated bills that aim to reduce opioid usage and preserve tough sentencing guidelines for criminals who use arms.

Jewish stuff: Kustoff told JTA this year that one of his proudest freshman accomplishments was garnering bipartisan support for a bill that would enhance penalties for attacks on religious institutions. The bill recently became law. A primary challenger this year contrasted himself with Kustoff by emphasizing that he was a "Christian conservative." Kustoff won handily with an endorsement from Trump.

Prospects: 99 percent chance to be re-elected.

Know this: Cohen has advanced theories that the 9/11 attacks in 2001 were an inside job, that Michelle Obama is a man and that the Obamas' children were sired by others. He has deleted or apologized for some of these theories, but the California GOP has said it will not assist him and county GOPs have pulled their endorsements.

Prospects: So poor, Cohen advises visitors to his campaign website to donate to someone else.

Know this: This is Kaufman's fourth attempt to unseat Wasserman Schultz. He is a frequent contributor to Frontpage Mag, where he recently wrote about a purported Muslim Brotherhood threat on Ivanka Trump.

Know this: Schneider's family fled from communist Romania when he was a child, and he became a Green Beret. He told the Boston Globe's Jeff Jacoby that he is not a fan of Trump's "cult of personality" but chides Democrats for reflexively opposing the president. Schneider told the Lynn Daily Item that he appreciates Trump for moving the U.S. Embassy to Jerusalem and for his tough posture on Iran.

Know this: Epstein, who chaired Trump's campaign in the state, wrote an op-ed titled "Why this Jewish millennial woman supports Trump" following the revelation late in the campaign that Trump had bragged about sexual assault. In June, she said the Jewish-founded Franklin Hills Country Club canceled a planned fundraiser for her, and she decried a lack of civil engagement in the Jewish community.

Prospects: Not great: a 1 in 6 chance of keeping the seat red.

Know this: The district includes a substantial population of Chaldeans, the ancient community of Iraqi Christians who speak a version of Aramaic. He told the Chaldean News that as a Jew he feels an affinity with the group, noting that both communities have preserved the Aramaic language.

Know this: The National Republican Congressional Committee has cut off this former Atlantic City councilor, who has on his Facebook page linked to racist musings. Grossman, whose primary victory was an upset over an establishment GOP candidate, has enthusiastically embraced Trump and has adopted the president's Make America Great Again motto.

Prospects: 1 in 40 shot. It looks like this red district will flip to blue.

Know this: Kipnis does not mention Trump on his website and favors a path to citizenship for "dreamers," undocumented migrants who came as children, a position directly at odds with the president but consistent with the state's liberal tendencies. Kipnis praised the Trump administration's decision to move the U.S. Embassy to Jerusalem.

Prospects: Extremely unlikely: a 1 in 100 shot.

Know this: Benno, who has worked for Hillel International and Camp Ramah, is the president of the Merrick-Bellmore Jewish Community Council and has traveled to Israel to litigate on behalf of victims of terrorism.

Know this: Levin's campaign bio says she speaks four languages, including Hebrew and Russian, "spoken by many in the district." Prospects: Nil.

Know this: Rabin, from South Carolina, is a graduate of its military school, The Citadel, and a veteran. He says he was the president of the campus Hillel. He moved to New York to work in clothing. Trump's friendship with Russian President Vladimir Putin rattles Rabin. "I have a big problem with people humoring Mr. Putin when he's an out-and-out murderer," he told Town-Village, an East Side online newsletter. He favors outlawing the purchase of assault rifles.

Know this: Goldstein's campaign website says she has been active in the Republican Jewish Coalition and Christians United for Israel. She has also been active with ACT! for America, a group the Anti-Defamation League calls the "largest anti-Muslim group in the United States."

Know this: A year ago Leib, 32, made headlines in his city (and earned a spot on "Fox & Friends") for coming out as a Republican who couldn't get dates in a Democratic city.

Prospects: Like the nice guy on the dating app, nil.

29th District, encompassing the eastern portion of the greater Houston area, running to replace incumbent Democrat Gene Green, who is retiring. His opponent is Sylvia Garcia, a Democratic member of the Texas State Senate.

Know this: Aronoff for 13 years has been the honorary consul in Houston for Hungary. His campaign website does not mention Trump and his issues page repudiates many hallmarks of the Trump presidency: Gangs pose a greater threat to Mexicans than Americans, Aronoff says, and border security "doesn't require some big expensive wall." He wants a path to citizenship for dreamers and wants to reinstate a work visa program for Mexicans.

Prospects: 1 in 99 in a district that is solidly liberal.

Here are some other noteworthy tidbits on the midterms:

The year of women?

Two women House Democratic challengers, Chrissy Houlahan in Pennsylvania and Kara Eastman in Nebraska, do not identify as Jewish, but each says her Jewish father shaped her outlook as a liberal Democrat.

There are three Levins running: Mike in California and Andy in Michigan, both Democrats, and Naomi in New York, a Republican.

Married to the tribe

Two Democratic House nominees, David Trone in Maryland and Angie Craig in Minnesota, are married to Jewish spouses and have raised their children as Jewish. They join at least two incumbent House Democrats who have done the same: John Sarbanes in Maryland and Rosa DeLauro in Connecticut.

Three House races pit a Jewish Democrat against a Jewish Republican: Nadler against Levin in New York; Perry Gershon against Zeldin in New York; and Debbie Wasserman Schultz against Kaufman in Florida.

Four Jews are in gubernatorial races, all Democrats: J.B. Pritzker tops the ticket in Illinois, as does Jared Polis in Colorado. Running for lieutenant governor are Susan Turnbull in Maryland and David Zuckerman in Vermont.