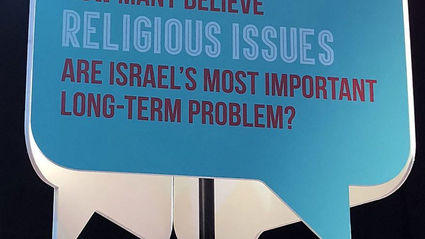 One of the signs at the Jewish Federations of North America's 2018 General Assembly in Tel Aviv discussing religious issues.

(JNS)-The 2018 annual General Assembly, held this year in Tel Aviv, took on a decidedly different tone to previous conventions. Focused on the theme, "Israel and the Diaspora: We need to talk," calls came for a respectful but serious dialogue on key issues that have been troubling America's Jewish communal establishment.

Yet many of the hard questions being asked of Israel by a largely liberal Jewish American leadership, as well as the panelists selected to answer those questions, were geared to conform to an admittedly progressive, social-justice agenda. They did little to address the concerns of large segments of Israel's population that have consistently voted for right-wing governments in the past decade.

In particular, representatives of Orthodox streams, who were subjected to significant criticism in conference panels, were not present to defend their tightly-held religious positions or raise opposing concerns. Israelis living in Jewish settlement communities or opponents of a two-state solution were similarly left out of the program, limiting the scope of dialogue on issues that Federation specifically identified as being prime concerns.

Major questions about rampant Jewish assimilation, intermarriage and apathy in American Jewish communities, growing anti-Semitism and the battles for Israel on American university campuses were left off the agenda.

Arsen Ostrovsky, executive director of the Israeli-Jewish Congress (IJC), told JNS that Jewish communal organizations should always strive for the widest possible diversity and representation. "That is something all of us should work to improve, especially at a time [when] we seek to bridge gaps in understanding, and how we relate between the State of Israel and Jews in the Diaspora, especially in North America," he affirmed.

Ostrovsky suggested, however, that this year's General Assembly was an important first step in advancing a dialogue that had not formally been held out in the open until now. "Having attended the JFNA General Assembly, I believe the organization should be lauded for bringing together such a diverse group of voices from across the political and religious spectrum in Israel in a much-needed conversation about how to strengthen this special bond between the Jewish state and the Jewish people," he said.

Leah Aharoni, program coordinator of Am Echad organization, an organization she says represents the interests and concerns of the Orthodox Jewish communities in the United States, told JNS that "the GA and the Jewish Federations claim to be the voice of Diaspora Jewry, but it is only a specific voice. It's liberal in its outlook."

She felt that it's disingenuous to ignore Israeli or American Orthodox religious movements, which she says are "the fastest-growing, youngest [population], whose members have the most kids in both countries."

Am Echad took out full-page advertisements in English-language newspapers in Israel on the first day of the conference, purporting that Israel's mainstream religious community, the Israeli majority that does not identify as "liberal," American Orthodoxy and those who "value all parts of our historic homeland" and oppose a two-state solution were not given a voice at the GA.

Aharoni lamented that the GA could have been an "amazing learning opportunity, where the two sides [Americans and Israelis] could come together and learn about each other, getting to know each other and understanding how each deals with similar issues."

She said "the opportunity was missed because Federations decided to voice one side [non-Orthodox], whether from the American side or from the Israeli side."

'Their own demographic and policies'

In a response to the Am Echad ads, Rebecca Dinar JFNA's spokesperson told JNS that the GA wasn't leaving anybody out. She said that "in moderated discussions on the plenary stage, facilitated discussions in dialogue dens and casual conversations held informally in hallways, we can guarantee that every point of view on every issue is represented."

She added that federations, in partnership with the Jewish Agency for Israel, hosts Knesset members from all political parties on trips to visit North American Jewish communities "in order to enhance their relationship and promote mutual understanding."

Rachel Moore, a public-relations specialist and religious resident of Judea and Samaria who attended the conference, told JNS that the outcry over the JFNA's program was misplaced.

"The Federation (JFNA) chooses to have its General Assembly in Israel every few years. It's an internal conference for the people involved to talk about the things that they fund and the things they want to see among themselves. It doesn't claim to be, or aim to be the world gathering of all Jews to talk about all of the problems of all the Jews.

"They have a perspective, they have an agenda, and they are entitled to their agenda," she said, "because it's for their professionals and their lay people."

"They are an American organization that raises money in America trying to figure out the best way to allocate money raised by Jews in America to fund the things that Jews care about," she added. "I don't have any problem with them making the decisions that are relevant to their own demographic and their own policies."

On the other side of the coin, Yisrael Medad, a veteran activist for communities in Judea and Samaria who attended the GA, suggested that the conference had a contentious tone and excluded certain populations, specifically Jews living over the Green Line.

Medad expressed surprise and some concern that Tel Aviv Mayor Ron Huldai "used the terms 'extremist leadership' and one that is 'unsuitable for the 21st century,' in his opening plenary address to the American Jewish communal audience, without properly defining whether he was referring to political, religious, social or cultural leaders."

The speech immediately "inserted a divisive tone into the conversation," said Medad, that could be felt throughout the conference.

He added that "reviewing the schedule of speakers of the GA, it would seem there is an almost total lack of representatives of more than 600,000 Jews living in Judea and Samaria-a population that [the federation] claims is causing problems within American Jewry."

"If you don't have them at the GA, you will never solve the problem," Medad told JNS.

Aharoni, whose organization took out the advertisements, acknowledges that American Jewry "unequivocally cares about Israel and should have a voice about Israel," but, she says, "that voice should be projected with humility and respect. Israel is not America, and [they] shouldn't dictate the conversation."

She recognizes that American and Israeli Jews don't always see eye to eye on many of the issues, but says "as it happens in families and in other relationships, we could agree to disagree in a respectable manner, and this could have been an amazing opportunity to create this mutual learning."

In response to the overall proceedings, Michael Lawrence, chief development officer and director of the Israel Office for Financial Resource Development at the Jewish Agency for Israel, explained that "the Federations are very focused on Jewish unity-a good thing-and on tackling the major challenges related to many North American Jews feeling pushed aside or insulted by policies and guidelines related to Jewish status in Israel."

"I am very happy to see North American Jews so engaged with the State of Israel, and determined to be part of its growth and development. The alternative-indifference and apathy, rejection and despair-is in my mind a much worse case, and something neither the Jewish world nor Israel can afford."