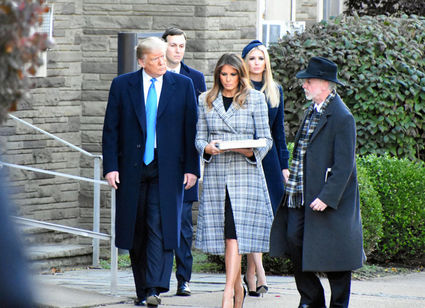 The Asahi Shimbun via Getty Images

President Donald Trump and first lady Melania Trump visit Pittsburgh with Ivanka Trump and Jared Kushner three days after the shooting at the Tree of Life Synagogue there, Oct. 30, 2018.

On Wednesday, the National Council of Young Israel addressed criticism of President Donald Trump following a synagogue shooting in Pittsburgh that represents the worst attack on Jews in the U.S. in the nation's history. NCYI counts 25,000 families among its members at 135 branch synagogues across the globe, in the United States, Israel, and Canada.

"We were horrified to hear the news about the anti-Semitic murderous rampage against Jews praying at Congregation Etz Chaim in Pittsburgh," said NCYI in a statement published by Arutz Sheva. "Like our fellow Jewish organizations, we released a statement expressing unity with the victims, and we reached out to our Young Israel Synagogue several blocks away to offer assistance in the aftermath of this tragedy. Our hearts ache and our souls cry out for the shattered families in Pittsburgh.

"The strong condemnation by elected officials from both political parties, and especially President Trump and his administration, were clearly heartfelt and we very much appreciate it. President Trump's decision to visit Congregation Etz Chaim, as well as the hospital in order to spend time with those wounded in the attack, together with his wife Melania, daughter Ivanka, son-in-law Jared Kushner and members of his administration, is a very important act of solidarity with our community.

"We are saddened that some, even within our Jewish community, have attacked the president and his policies instead of using this period as one of healing. This is not a time for political attacks. The mass murderer who targeted Jews in the Pittsburgh attack opposed President Trump and penned vicious things about him. President Trump is clearly not responsible for the deadly shooting, and his response to the attack and his strong words against anti-Semitism are greatly needed and appreciated. Those who have taken to criticizing the president were doing so prior to this horrific mass murder occurred, and it is unseemly that they would use this massacre to denounce the president at this time."

The statement continued by lauding Trump as "the best friend Israel has ever had in the White House," noting that he "has stood up and defended Israel more strongly than any president before him" and "visited Israel on his first foreign trip," becoming "the first president to visit and pray at the Western Wall while in office."

The organization also expressed gratitude to Trump for "appoint[ing] the most pro-Israel ambassador to Israel ever appointed, Ambassador David Friedman, a Young Israel member who assisted with President Trump's decision to move the U.S. Embassy to Jerusalem and recognize Jerusalem as Israel's capital" and for "treat[ing] its consulate in Jerusalem like any other consulate . . . rather than having it act like an embassy to the Palestinian Authority that reports directly to Washington, D.C."

The statement continued, "The leading anti-Semitic nation in the world is Iran, which regularly calls for Israel's destruction and welcomes Holocaust deniers. President Trump has taken strong action by sanctioning Iran and ending the nuclear deal that enabled Iran to increase its defense budget by 40 percent. Iran is the leading supporter of Hamas and Hezbollah, two major terrorist organizations committed to Israel's destruction. President Trump also crushed ISIS, which has been an anti-Semitic terrorist organization. No U.S. president has taken stronger action against these entities than President Trump.

"President Trump has spoken openly and proudly about his deep love for his daughter and adviser Ivanka Trump, who converted to Judaism; his son-in-law Jared Kushner, who is Jewish; and his three Jewish grandchildren. The president also has an Orthodox Jewish adviser in Jason Greenblatt, his special representative for International Negotiations and Middle East Envoy. U.N. Ambassador Nicki Haley has done an amazing job standing up for Israel at the U.N. and National Security Adviser John Bolton has a long history of being a great friend to Israel, and he has continued that friendship in his current position. Vice President Mike Pence has given extraordinary speeches of support to Israel in the Knesset and in commemoration of Israel's 69th Anniversary, and he helped repair Jewish graves in St. Louis when they were vandalized.

"One does not have to be a supporter of the president to hear the heartbreak in his voice when he made multiple statements concerning the tragedy, each statement getting stronger and stronger in tone. Israel's Education and Diaspora Affairs Minister Naftali Bennett called President Trump's comments the toughest comments ever made by a president against anti-Semitism. President Trump called anti-Semitism an 'historic evil,' later saying 'there must be no tolerance for anti-Semitism in America.' In an extremely powerful and poignant statement, President Trump said, 'This evil, anti-Semitic attack is an assault on all of us. It is an assault on humanity. It must be confronted and condemned everywhere it rears its ugly head. We must stand with our Jewish brothers and sisters to defeat anti-Semitism and vanquish the forces of hate. Those seeking their destruction, we will seek their destruction.'"

Neo-Nazis and the Radical Left

"The white supremacists and radical-left share their same BDS support and anti-Israel agenda, whether it is white supremacist David Duke, or proud BDS supporter from the left Linda Sarsour, who tweeted in 2012 that 'Nothing is creepier than Zionism.' The BDS activities of Linda Sarsour and her fellow anti-Israel activists fall squarely within the international working definition of anti-Semitism, which was adopted by the International Holocaust Remembrance Alliance in 2016 and is utilized by the U.S. State Department. This is why the pro-Israel policies of President Trump serve as a strong condemnation of the views of white supremacists and BDS supporters who oppose Israel.

"Over a year ago, there was a meeting and briefing for members of the Jewish community about the threat of terrorism. At the meeting, we said that our community's main concern is attacks by white supremacists and radical Islamic terrorists. We would have made the same statement five years ago as well. The fact that American people of all types have come together and supported our community at this time is very much appreciated. This is not the time to play politics; rather, it is a time to come together.

"May God comfort Pittsburgh alongside the mourners of Zion and Jerusalem," said the organization at the statement's conclusion, quoting a verse from the Torah traditionally recited during the time of mourning.