Oman calls for recognition of Israel at regional forum 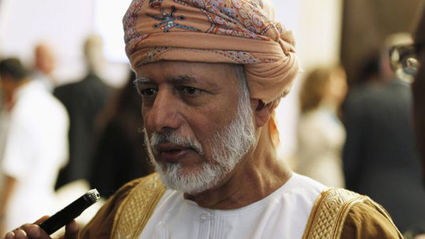 (The Tower via JNS)-Oman publicly called for regional recognition of Israel a day after Israeli Prime Minister Benjamin Netanyahu made a historic visit to the Sultanate on Friday, The Jerusalem Post reported.

Yousuf bin Alawi bin Abdullah, Oman's Minister for Foreign Affairs, told a security forum in Bahrain that "Israel is a state present in the region, and we all understand this. The world is also aware of this, and maybe it is time for Israel to be treated the same [as other states] and to also bear the same obligations."

Netanyahu traveled to Oman at the invitation of the country's leader, Sultan Sayyid Qaboos bin Said Al Said, in a development that Washington said could help regional peace efforts. On his trip, the prime minister was accompanied by his wife, Sara, as well as senior officials, including the head of the Mossad intelligence agency and members of his national security team.

"We are not saying that the road is now easy and paved with flowers, but our priority is to put an end to the conflict and move to a new world," bin Alawi told the forum.

The minister clarified that while Oman was offering ideas to further peace between Israel and the Palestinians, the Sultanate was not acting as an official mediator. Rather, Alawi said, Oman was relying on the United States and efforts by U.S. President Donald Trump in working towards the "deal of the century." Although still not officially unveiled, the Palestinian leadership has derided the deal as "the slap of the century" and have boycotted efforts by the U.S. to formulate a new peace initiative.

The U.S. Middle East envoy Jason Greenblatt welcomed the "warming ties and growing cooperation between our regional friends" in a tweet on Friday. "This is a helpful step for our peace efforts & essential to create an atmosphere of stability, security & prosperity between Israelis, Palestinians & their neighbors. Looking forward to seeing more meetings like this!" he said.

The last high-profile visit by an Israeli official to Oman occurred in 1996, when former Prime Minister Shimon Peres traveled to the country to meet with the sultan and open an Israel Trade Representation office.

On Thursday, at the launch of the Israeli Innovation Center at the Peres Center for Peace and Innovation in Tel Aviv, Netanyahu hinted at a new opening with the Arab world.

"We always thought that if we solved the Palestinian problem, it would open up the doors to peace with the broader Arab world. And that's certainly true if you could do it. But it may mean that equally true and perhaps even truer is that if you open up to the Arab world and you normalize relations with them, it will open the door for an eventual reconciliation and peace with the Palestinians," he said.

"We should do both, but I think you should not underestimate the openness and the thirst in the Arab world today for Israel," noted Netanyahu. "And the reason, the first reason before anything else, is that we're there in innovation."