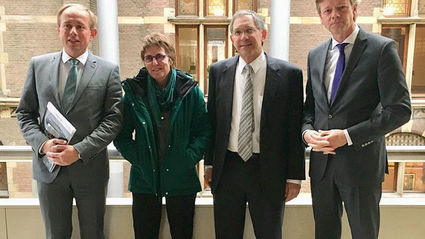 (Palestinian Media Watch via JNS)-Palestinian Media Watch director Itamar Marcus spoke to members of Dutch Parliament yesterday documenting the many ways in which the Palestinian Authority in itself is the fundamental impediment to peace. Marcus documented PA's vicious Antisemitism, its indoctrination of children to hatred and terror, as well as the PA's continued monthly payments to terrorist prisoners and families of killed terrorists.

Members of Dutch Parliament expressed their condemnation of these PA activities and discussed steps that should be taken to stop the funding by their own government.

"I think it's also important to have now further steps [by the Netherlands] and to stop each payment to Palestinians as long as there is no real progress." [Parliament of The Netherlands, Nov. 7, 2018]

The MPs were also addressed by Kay Wilson, a British-born Israeli tour guide who survived a brutal terror attack in 2010. Kay was bound, gagged, and stabbed 13 times with a machete and left for dead, while her Christian friend, Kristine Luken, was murdered.

"I watched in horror as a Palestinian terrorist butchered my Christian friend to death right in front of me only because he thought she was a Jew. A second Palestinian terrorist stabbed me 13 times with his machete, snapping my ribs and shattered more than 30 bones. The PA's rewarding of those two killers and all the other thousands of terrorists in prison is both morally abhorrent and incomprehensible." [Parliament of The Netherlands, Nov. 7, 2018]

Following previous PMW meetings and lectures with Dutch MPs, the parliament passed three different resolutions in 2013, 2015, and 2016, calling on the government to stop or condition funding of the PA until they stop rewarding terror. However the government has never implemented these resolutions. MP Kees van der Staaij addressed this issue:

"All that's done until now [to stop PA payments to terrorists], it's too soft, it's not effective, and further and stronger measures are necessary."

Wilson's words left a strong impression on the MPs about the urgent need for foreign governments to stop supporting the PA's rewarding terrorists:

"I was very impressed with the story of Kay Wilson, that she survived 13 stabbings in her body. This makes Itamar Marcus' appeal even stronger, that the [PA's] paying of convicted terrorists should stop, and we'll put this forward in our Parliament again." [Parliament of The Netherlands, Nov. 7, 2018]

MP Voordewind was optimistic that the parliament would pass stronger legislation this time:

"We'll try it again; we're now part of the government, part of the coalition, so we'll try to convince other coalition parties to support this resolution now."

MP Voordewind wants the legislation to be very specific about how much funding to cut:

"Hopefully the other parties will agree to cut the budget from the PA, by the amount they're spending on the terrorists."

See the full report at PMW.