By Benjamin Kerstein
The Algemeiner

Farrakhan in Iran: Trump Like Satan, Chants 'Death to America' 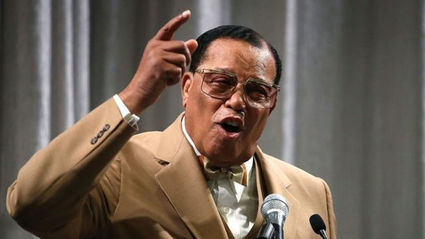 Nation of Islam leader and prominent anti-Semite Louis Farrakhan chanted "Death to America" and claimed that "America has never been a democracy" on Sunday during a solidarity trip to Iran, ahead of the re-imposition of U.S. sanctions on the country this week.

According to Iran's semi-official state news agency Mehr, Farrakhan said at a meeting with the Secretary of Iran's Expediency Council Mohsen Rezaei that America is conspiring against Iran.

He also compared President Donald Trump to Satan. "The Christians say that Satan is a liar, and every day they keep a count of Trump's lies," Farrakhan said in the meeting. "Only Satan was created by a lie."

"I understand how the enemies have plotted against the Iranian people and I would like to stay alongside you to stop their plots," he said.

He also blasted American support for Saudi Arabia, Iran's arch-rival in the region, and added, "Satan seeks to divide Muslims and wants them to kill each other, while God tells us in the Quran to be united."

Farrakhan has referred to Jews as the "synagogue of Satan."

In his remarks, he condemned the new American sanctions on Iran that will take effect on Monday. "Today, I warn the American government that sanctioning Iran is a big mistake," he said.

In addition, he stated that African-Americans are part of Iran's Islamic revolution.

According to the Farsi language Islamic Republic of Iran News Network, he also spoke to students at the University of Tehran law school and fulminated against Israel, praised women's rights in Iran and the Islamic laws demanding they cover themselves. He claimed, "America has never been a democracy and has always leaned towards the wealthy and powerful class."

At the end of his talk, Farrakhan chanted the common Iranian slogan "Death to America," and was joined by members of the audience.

A long history of anti-Semitic statements

Farrakhan, perhaps the most notorious black supremacist in America, has a long history of anti-Semitic statements. Most recently, he referred to Jews as "termites."

Several prominent American activists and politicians have been linked to Farrakhan in recent years. Tamika Mallory, a leader of the Women's March, praised him as "GOAT" or "Greatest of All Time." Linda Sarsour, another leader of the March, attended an event with Farrakhan and has repeatedly refused to condemn him.

Recently, a photograph surfaced of former President Barack Obama meeting with Farrakhan in 2005 while he was a senator.