President-elect of Brazil promises: Israel can count on our vote 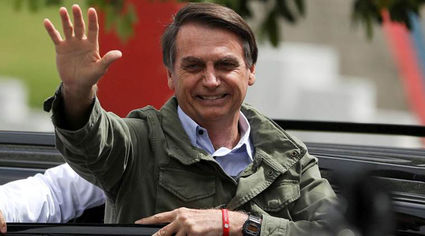 (Israel Hayom via JNS)-Until a few weeks ago, Jair Bolsonaro, now the president-elect of Brazil, was a little-known legislator. No one thought he would go on to become the leader of the country. But on Wednesday, a week after he astonished everyone by winning the presidential election in Brazil-the largest democracy in Latin America-Bolsonaro chose Israel Hayom for what appears to be his first interview with the foreign media, and made it clear that his support for Israel and promises about Jerusalem were not just an election gimmick.

This is part of Bolsonaro's desire to lead Brazil on a new path and free his country of the policies that he believes to be outdated-policies instated by the left, which has been in control almost continuously since the early 2000s.

Bolsonaro is under attack for his blunt, politically incorrect style, but that's exactly what prompted the Brazilian masses to put their trust in him as their new leader. They wanted a leader that would make them proud of their country, which is currently plagued with violence and economic distress.

Many believe, incorrectly, that Bolsonaro is an extreme right-wing nationalist. But he isn't bothered by the misperceptions and says that the claims that he will end democracy say more about his opponents than they do about him.

Israel Hayom Editor-in-Chief Boaz Bismuth spoke to Bolsonaro by telephone, with the help of an interpreter.

Q: Did you know that your name, Jair, means "bringing light" in Hebrew?

"Yes, I was informed not long ago. I have the moral compass of a man who intends to do his best for his country and intends to tighten relations with other countries that think the same way we do and champion democratic elections, liberty and respect for others.

"I was in Israel two years ago, and I intend to return. The Israeli ambassador to Brazil [Yossi Shelly] visited me twice this week, and I've always had excellent relations with him. I'm very happy that I'm treated so warmly and that the official envoy of the State of Israel treats me this way, and it is truly mutual. I love the Israeli people and Israel. You can depend on the fact that I will promote closeness and fruitful cooperation between us starting in 2019."

"Israel is a sovereign state. If you decide on your capital city, we will act in accordance. When I was asked during the campaign if I'll do it [relocate the embassy] when I was president, I said yes, and that you're the ones who decide on the capital of Israel, not other people.

Q: Can Israel expect fairer, more supportive votes from Brazil in international forums, such as the United Nations, on matters involving Israel?

Q: To what do you attribute your electoral victory, and what is your administration's general plan?

"The victory is down to a number of things-the weariness of politicians who made politics a profession here in Brazil; corruption; contempt for family values; and the previous governments' very close ties to socialism and communism, and of course, to the fact that we flew the flag of truth."

Q: Were you surprised by the popular support, the results, and your [party's] increased representation in the National Congress?

"Our party had one member in parliament and now we have 52, despite the fact that we don't get any television coverage or [government] funds. The campaign relied heavily on social media, and now we're 10 percent of the parliament and we've managed to get the support of other parties as well as independent lawmakers, so governing isn't a problem.

"I wasn't surprised, because I started crisscrossing Brazil four years ago. Brazil is very large. Israel is smaller than our smallest state [Sergipe], so imagine if you were 26 times bigger. Over the course of four years, we managed to get to every part of Brazil. By speaking the truth, we gained the sympathy and trust of the Brazilian electorate, and even though I was in the hospital for 23 days, and at home for another 20 and couldn't go out [following an attempt on his life], we won by a large margin of votes."

Q: Are you proud of the long political road you've traversed, and will the assassination attempt affect your presidency?

"For 28 years, I've been part of a parliament that receives no support from the public. It is a parliament that has turned its back on the people long ago. But the fact is that I'm a survivor of that parliament. Before I entered politics, I was in the Brazilian army for 17 years, and as far as I know in Israel almost everyone has military experience... [In the military,] one experiences nationalism. It shapes your values and principles-gives you responsibility, patriotism, sacrifice and meaning.  All of this molds your personality."

Q: Why do you think people are saying that you pose a threat to democracy?

"They can't go after me for being corrupt. Meanwhile, their government [the previous left-wing government] operated in a number of ways-controlling the public with the media; rewriting the constitution; nationalizing assets, which lowered the value of private property; submitting to dictatorships all over the world. That's what the left does, as it walks around carrying Lenin's works on communism under its arm. The left always blames others for the very things it does itself. But the Brazilian population, which has been liberated from the traditional media, trusted my word and my past."