Florida governor-elect Ron DeSantis: 'I will be aggressive against BDS' 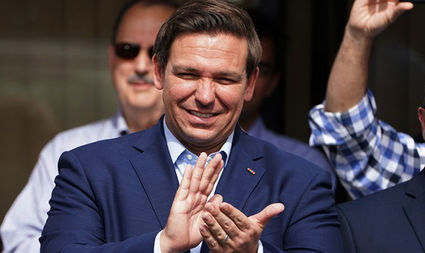 (Israel Hayom via JNS)-If there is one American politician who has made support for Israel a daily agenda item, Florida governor-elect Ron DeSantis is that person.

DeSantis, a Republican who for six years served in the U.S. House of Representatives, has his name on a series of legislative initiatives in Congress aimed at protecting and strengthening Israel, the highlight of which was his relentless push to relocate the U.S. embassy in Israel from Tel Aviv to Jerusalem. Even after U.S. President Donald Trump made the historic decision to recognize Jerusalem as Israel's official capital, DeSantis continued to act to implement that move on the ground, arriving in Israel in order to examine possible sites for establishing an embassy in Jerusalem.

During his final term as congressman, DeSantis pushed for U.S. recognition of Israeli sovereignty over the Golan Heights. Coming up on the end of his third term as congressman, DeSantis resigned from the position and decided that he would run for governor of Florida-one of the most important states and one with a heavy and growing Jewish population. His opponent was Tallahassee Mayor Andrew Gillum, a man perceived by many to be a rising star in the Democratic Party.

Tuesday night was a nerve-wracking one for the 40-year-old DeSantis, as he watched and waited for the results in the race to lead this important state of more than 20 million people. He wound up beating Gillum by a few tenths of a percent.

On Wednesday, DeSantis spoke with Israel Hayom in what was his first foreign media interview as governor-elect. If there's one takeaway from this interview, it is that, beginning in January 2019, Israel will have friend in the Florida Governor's Mansion.

Q: What was the first thing that entered you mind when you learned you had won the election?

Well, [I was] somewhat relieved just because we worked very hard for it, and we had a huge number of people who were volunteering to help us, who were praying for us. And I really wanted to make sure that we came through and won for them, and I didn't want to let them down. And so I was just real, real happy that, you know, we came through when it counted and brought home a good victory.

Q: At what point did you realize you were winning the race?

I would say this morning, when you know, we were getting reports of really just historic voter turn-out. We had gone into the election-Republicans had turned in 20,000 fewer ballots than Democrats had, which is basically an 80,000 vote improvement over what Trump had going into his election, so I knew if our voters came out, you know, and turned out that there would be enough votes there for me to win. It just seemed like that was happening by 10 a.m., we were very optimistic that we would win.

Q: What do you believe helped you cinch the race? This was a highly contested race up until the very last moment. Was it the Jewish vote or a specific segment of the population?

I think we're going to have to sift through the numbers to see exactly how all that shook out. I can tell you, though, that I think that there was a big divide in the race between, you know, me being a very pro-Israel candidate with a record of strong leadership, and my opponent who just wasn't, had been aligned with groups that are very left-wing and hostile to Israel, and so it was definitely something that I stressed throughout the campaign. And as governor, I'm in charge of the anti-BDS list, so when there are boycotts of Israel, I can unilaterally put these companies on Florida's list so that they can't do business with the state of Florida. And I'll be very aggressive in doing that, and I think that will help combat BDS [the boycott, divestment and sanctions movement].

My first foreign trip as governor is going to be to Israel. I want to obviously develop additional economic relationships, want to make sure we continue to have direct flights from south Florida to Ben-Gurion [International] Airport. And I also want to establish working relationships between some of the universities and researchers and innovators in Israel with people in Florida, because we have different problems, like red tide [harmful algal blooms], and I think if we're able to work constructively with Israelis, we probably could develop solutions much quicker. So I think that there's going to... open a lot of possibilities for us.

Q: Picking up on what you said about BDS, would that be a top priority for you? I believe there's another Senate bill that would make it punishable to be part of BDS. Would you push for such legislation?

I don't know exactly which bill, but I would say I'm definitely in favor of strengthening our tools to fight BDS. For sure, we will be aggressive in supporting that. I've done that in the Congress for six years. In fact, I was the first one to hold an anti-BDS hearing years ago on my subcommittee, so we're going to be very aggressive on that, and part of that is, you know, Florida's a really big, diverse state. But yet it doesn't matter if I'm in Boca Raton or Pensacola-people in Florida are pro-Israel, and they want to make sure that we are standing with them.

Q: Can you tell us more about the Jewish population's efforts to make Israel a central campaign issue? How much did the campaign ultimately focus on Israel?

I would say Israel was a bigger issue in this governor's race than it has been in other governor's races. Part of it is because you had a contrast with the two candidates, and then part of it is just within the last few years, states have been active in fighting things like BDS. And so there's more of a role for a governor, you know, now than there may have been 20 years ago in terms of the relationship between the U.S. or individual states and Israel. And so it's great to be able to have that ability to really push back. And as governor, I'll obviously do that very quickly.

Q: You were one of the first people to push for the relocation of the U.S. embassy to Jerusalem. As governor, how will you advance similar efforts, whether regarding the Golan Heights or issues concerning Israel?

Well, I want to make sure when we're doing trading with Israel, I don't draw any distinctions like the State Department would between an Israeli Jewish community in Tel Aviv or Jewish communities in the Golan Heights or Judea and Samaria, and I view it all as basically the same. There shouldn't be a distinction. I do think that [President Donald] Trump should recognize Israeli sovereignty over the Golan Heights. When I do travel to Israel, I will make that case and urge him to do it just like I urged him to move the embassy when I was over there in 2017. So, yeah, look, I think when you lead with purpose and conviction like Trump did when he moved the embassy-look, good things happen as a result of that. I think the same [is true] with the Golan Heights. I mean there's no way that [that territory] should ever be transferred to anybody in Syria, whether it's [Syrian President Bashar] Assad, whether it's Hezbollah, you know, ISIS [the Islamic State terrorist group]. I mean it's a disaster. So it's very important strategic ground, and we want to make sure that Israel keeps that and that should not be subject to further dispute.

Q: Did you speak with either with President Trump or Mr. Gillum after the results were announced?

Yes, Andrew Gillum called me and was very gracious. He conceded the race. And I called, after he called me, I spoke with the president and just let him know that, because I don't think the networks had called it yet, but I said I just want to let you know that [Tallahassee] Mayor Gillum did concede, and we won and thanks for your help. So he was pleased to hear that. I didn't talk to him in-depth because he was busy. He had a lot of folks in the White House I think. So I'll probably follow up with him sometime today.

Q: Is there anything you would like to say regarding 2020? What direction do you think the United States is headed?

Well, look, these political seasons have gotten more and more nasty in the United States. I mean, I think 2020, you know, if President Trump continues what he's doing, I think he's going to go into 2020 with a really strong record of success. If you look at our economy, you look at the bold foreign policy moves he's made-not just like putting the embassy in Jerusalem, but by nuking the Iran deal and now imposing more sanctions on Iran-I mean that is very, very popular in Florida, and it's popular throughout the country and it's the right thing to do, the judges that have been put on [the Supreme Court]. There are a lot of achievements, and so I think he's going to be in a strong position to win re-election.

I think the fact that the Democrats took the House of Representatives last night, I think that's probably going to help Trump get re-elected because I think what you're going to see is [House Speaker Nancy] Pelosi just over-reach. I think that she's going to be driven by all the left-wing crazies, and I think it's going to be a good foil for the president. So, he's probably not going to be able to get as much done with her as speaker, but, you know, the flip-side of that is I do think it positions him better for re-election. And I think Pelosi's over-reaching will probably help ensure that Trump is in fact re-elected.