The Chanukah connection: Sharing the light with far-away family 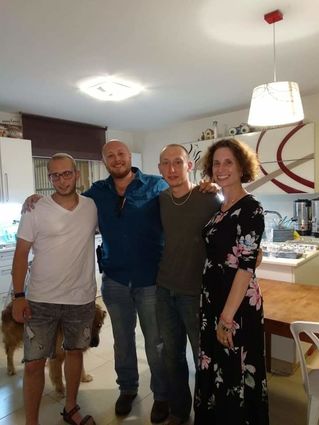 (JNS)—For generations, lighting the Chanukah candles together has been the stuff that makes lifelong memories. But today’s far-flung families are increasingly challenged to share the sight of the candles aglow, the sound of the blessings and traditional songs sung by old and young alike, the feel of a perfect dreidel spin, and the smell and taste of latkes fresh from the pan.

Long-distance offspring may be away at college, on a gap-year program, studying in a seminary or yeshivah, a lone soldier serving in the Israel Defense Forces, or working and living in another town, with or without kids of their own. Leaving today’s parents (and grandparents, too) called upon to apply ingenuity, creativity, flexibility and some basic technical know-how to successfully span the miles with Chanukah spirit.

In fact, says “The Red Tent” author Anita Diamant, who’s also generated a library of guidebooks on modern Jewish life, including “How to Raise a Jewish Child: A Practical Handbook for Family Life,” “my family enjoys Chanukah kitsch so much we keep it going over the miles.”

When her daughter was a college student, Diamant would send a box of “Chanukah stuff as counterweight to the Christmas decorations.” The “stuff”—menorah, gelt, candles (flame-free ones for those in dorms) can include modest (think: socks) gifts for each of the eight nights, she says, including notice that a donation was made in their name to a nonprofit organization that’s meaningful to them.

Indeed, many find that Chanukah invites us to shelve our refined sensibilities for eight days. There’s no such thing as bad taste when it comes to Chanukah—the tackier, the better, according to some.

And here is where technology can be a parent’s best friend. Diamant recommends sending long-distance kids a “light-hearted, light-themed” text or email on each night complete with a holiday story and a link to a Chanukah song, “plus a video of you lighting your chanukkiah at home.”

Whatever form it takes, college students receiving Chanukah love from home is never more appreciated than in these days of anti-Israel—and often, outright anti-Semitic—influences on many North American campuses.

“Even celebrating a happy Jewish holiday like Chanukah can get tricky on campuses today,” says Tammi Rossman-Benjamin of AMCHA Initiative, a watchdog organization monitoring North American campuses. “And yet, the Chanukah story—about the few against the many—has so much to say about the threats that Jewish students face today. We know what happened thousands of years ago on this small piece of land, which the anti-Israel forces are telling us we have no historical right to. It reminds students that, even more basic than the latkes and sufganiyot, is that this awesome story and this ancient land truly belong to them.”

Lone soldiers are reliving that story daily as they protect the land and its citizens. But it’s not always easy on their parents multiple zones away. “Chanukah is when I miss them the absolute most, and when we light, I usually cry,” says Hadassah Sabo Milner, a mom of three IDF lone soldiers (one of whom just completed his service) who lives with her youngest son and husband in New York. “On Chanukah, we were always singing ‘Maoz Tzur’ (‘Rock of Ages’) really badly together. And even though I’m not the kind of mom who needs to talk to my kids every day—they need to live their lives without having to check in all the time—when we light here, it’s the middle of the night in Israel, and I can’t just pick up the phone and call.”

‘Begin new traditions all their own’

But at least college students and IDF soldiers have built-in communities to celebrate Chanukah with. For young adults working and living far from their families, it can be a lonely existence.

That’s why Rabbi Rachael Klein Miller makes it a point to host events designed just for young adults at Temple Emanu-El, a Reform congregation in Atlanta.

“It might be tough to be away from home because they haven’t quite mastered the latke recipe, they’re putting together a makeshift menorah, or they simply miss the sounds of parents telling them to ‘Be careful! Watch the flame! Don’t let the wax drip!’ says Miller. “But being away from home also means that they’ve started to pave their own path; it’s a chance to share traditions from home and begin new traditions all their own.”

And when they pose for a group candle-lighting photo to post on Facebook or Instagram, “there’s a glimpse of peoplehood—of feeling connected to the Jewish community and loving the chance to share that pride with the digital world.”

Whereas young adults are celebrating beloved traditions from childhood, young children are busy forming their memories, and grandparents want to be part of that happy process.

Even when she can’t be with them on the holiday, Ann Wanetik, who lives in the Detroit area, takes advantage of her visits to her eight grandchildren, all of whom happen to live in one small country in the Middle East. “Whenever I’m in Israel in the fall, I take each one out separately and let them choose what they want for Chanukah,” she says. “It’s an opportunity to have some time alone with each one, focus on what that child enjoys most and buy them something special they pick out themselves.”

Taking advantage of Skype and the Internet

For Boston-area grandmother Ruth Nemzoff, technology shrinks the miles between her and her long-distance grandkids. “You’ve got to get with the program,” she says.

So Nemzoff, author of “Don’t Roll Your Eyes: Making In-Laws Into Family,” and known as “Mama Ruth” to her 11 grands ages 8 months to 18 years, has developed a full program of Chanukah connections with those on the West Coast and in Washington, D.C.

“No matter what, when you live at a distance you have to be resourceful in creating Chanukah with your grandchildren, but with interfaith ones, it’s even more important,” says Nemzoff, who serves as a board member at InterfaithFamily.

“I’m not big on materialism, and the goal is not to compete with the gifts under the tree, but I do want to share this special tradition with them,” she adds.

The Internet makes much of this possible, she maintains. Through it she uses it to send her younger grandkids “Shalom Sesame” DVDs and the older ones Chanukah songs, including Maccabeats Chanukah tunes. She’ll send small gifts, and in this Skype-able world arrange to light the candles, open gifts and even make latkes “together” (doable with her West Coast family three hours away on Pacific Standard Time). “Sometimes, I also email them a picture of the gift they’ll get the next time we visit.”

With interfaith families, it’s important to be both sensitive and honest, says Nemzoff. “You need to talk to the parents first so they won’t feel you are converting the kids or competing, but [it’s important to] share your family’s traditions, your early memories of Chanukah and your heritage since it also belongs to them.”

Sometimes, even with the best of distance-spanners, it’s hard to beat the appeal of a sloppy sufganyiot-flavored kiss.

“We usually just get on a plane,” says Baltimore bubbe Belle Libber with a sigh. Be it to the grandkids in Milwaukee, Atlanta or Israel (one daughter and family live nearby), Libber and her husband Jonathan have racked up the frequent-flyer miles. “There’s nothing like being right there with them,” she says.

When that isn’t possible, love itself can travel at the speed of light—namely, the light of the Chanukah menorah, says Rabbi Yisroel Gordon, principal of Machon Los Angeles, a high school for girls. “One reason Chanukah makes a lot of people really homesick is the power of the menorah light itself, the only remnant we still have of the priests’ service in the holy temple,” he says. “Chanukah reminds us of the importance of family since it was one courageous Jewish family, Matisyahu and his five sons, who created this miracle and saved the Jewish people.”

“If I were a mystic,” he adds, “I’d say that, gazing at the lights, you can feel that wherever they are, your child is gazing at the same lights along with you.”