Black Friday is now a thing in Israel 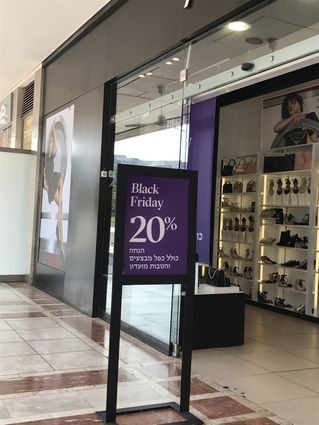 JERUSALEM (JTA)-I was watching late night network television on Saturday night-that's not terribly exciting here-when I was slammed with a string of ads that made me feel like I was back in America.

The ads were in practically shouted Hebrew, but I could discern the same two English words in each: Black Friday (You have to say it with a Hebrew accent though, kind of like Blek Fchidey.) Clothing, electronics, home decor-all the ads were pushing Black Friday sales.

Nor did the Black Friday assault stop with my television. Suddenly every cellphone text message (and I get a lot of them because I have loyalty cards at literally every store in one of the Kfar Saba malls where I do most of my shopping) is from a chain store reminding me that its Black Friday sales HAVE ALREADY STARTED!

I won't lie; I have taken advantage of these sales. In fact I visited my favorite mall today and there were Black Friday sales signs in front of every store.

But the difference here: The stores are not swamped with shoppers like in America (though the pace of shopping is noticeably brisk).

This isn't the first year that I have noticed Black Friday sales in Israel. It is just that this year it became... commonplace.

How did this most American of traditions-the door-busting Christmas-season sales that come the day after Thanksgiving-make it to Israel? Blame the Internet. Israelis order a ton of merchandise online, and every website they visit is touting Black Friday and Cyber Monday sales. If it's good enough for Americans, it's good enough for Israelis, right?

While Israelis have come to expect these November sales, which this year come conveniently less than two weeks before Chanukah, I don't think most of them know why there is a Black Friday or that it is the kickoff of the Christmas shopping season.

And why should they? As a nation we don't celebrate Christmas even though it is the land where the story takes place.

But everyone loves a sale.

As for Thanksgiving, when we made aliyah from the States more than 18 years ago, my husband and I decided to keep the Thanksgiving tradition alive. The holiday was particularly meaningful to his immigrant grandfather, who escaped from Europe right before the Holocaust, and my immigrant father, a Holocaust survivor.

The first time I tried to buy a whole turkey for our Thanksgiving dinner, butchers in three communities looked at me like I was crazy. "Al lo dvar kazeh po!" (there is no such thing here), one said, and suggested I take home a nice turkey breast.

"Whatever do you want that for?" another asked.

As for cranberry sauce, fuhgedaboutit. In later years, stores in Anglo neighborhoods in cities such as Jerusalem and Raanana began stocking cranberry sauce. And this year my local supermarket also started selling it, likely in deference to a new cadre of young immigrants from the United States who have moved to our community in recent years and, apparently, are continuing to observe Thanksgiving.

On Sunday, when I went to order a whole turkey from the local butcher, the woman at the counter told me I was the third order that morning!

"For Chag Hahodaya, right?" she asked me, using a literal translation of "Festival of Thanks." (In a strange linguistic coincidence, the Hebrew word for turkey, hodu, can also mean "give thanks." That's a fun fact for everyone but the turkey.)

The term Black Friday became widely recognized in the 1980s. According to several sources it was dubbed "black" (as in negative, as in "black eye" and "black sheep") by police in Philadelphia to describe the crowds and traffic on the day after Thanksgiving and the day before the Army-Navy football game.

Do Israelis know this? I have no idea. But every time I hear or see a Black Friday ad, I feel like maybe too much of America has crept into our society. We already have pre-Rosh Hashanah and pre-Passover sales, since they have also become gift-giving occasions. But Black Friday? It's just not Israel.

All I know is that I can't wait for Friday and the end of the bombardment of advertisements. Besides, the End of Season sales will already be starting soon.