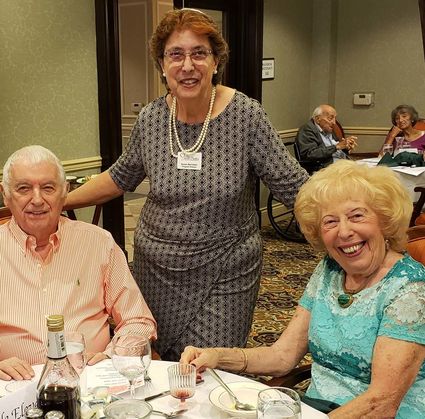 It takes very special people to devote themselves to befriending and uplifting seniors in living facilities who might otherwise be forgotten, and Judy Suberman and Susan Bernstein are two of those people. They will be recognized at this year's JP Connections, the Jewish Pavilion's annual luncheon and holiday bazaar for volunteers and members.

Suberman grew up in Orlando, and her way of connecting with seniors began at an early age. Her mother's mom, who at a relatively young age had suffered a major stroke that made walking and talking difficult, moved to town and was an important part of her family life. Through her frequent interactions with her grandmother and paternal grandparents, Suberman learned the importance of being patient and accepting seniors as they are, which served her well when her mother was diagnosed with Alzheimer's disease and became increasingly infirm.

Her mom eventually moved to the memory care wing of what was then known as Heritage, now called Atria Park of Lake Forest in Sanford. Suberman visited regularly and felt very strongly that her mom's essence remained, even when she could no longer communicate. A characteristic gesture or a light pat on Suberman's shoulder would reassure her daughter that the mother she loved was present.

Suberman frequently brought her mother to participate in Jewish Pavilion programs at her building and began volunteering to help out. For about five years, she led monthly Shabbat services with Jerry Leibman, whose mother, Sally, lived in a different wing of the facility. She often brought her two children, Rachel and Jacob, who are now young adults. Suberman's beloved father had passed away in 2006, about seven years after his wife's diagnosis, and her mother followed him in 2011.

After taking a year off following her mother's death, Suberman returned to visiting at Atria and helping with Jewish Pavilion programming. Her many years of connecting with seniors gave her a sense of familiarity and purpose at Atria. "It was just part of my life," Suberman said. She became particularly close to one of the residents, who died this year. "I called her my new mom," she said.

It turns out that Suberman has had several "new moms" over the years. She is careful to ask them first if she can call them that-it's her way to signal a feeling of closeness and companionship. One joked that Suberman was welcome to call her that "as long as you're not asking me for money!"

Suberman makes individual visits to some of the seniors a few times a month and also leads programs at Atria and Spring Hills Lake Mary, where one of her "moms" moved several years ago.

One program at Spring Hills is called History with Judy. It evolved from Suberman's visits to her friend, during which she often accompanied her to the facility's activities. Often, these involved discussions on a variety of topics, to which Suberman contributed her own perspective. The activities staff soon asked her to design her own program, which became the monthly history series she now leads.

Suberman devotes significant time to researching and preparing for the monthly History with Judy programs, and they are popular with residents. If there is a Jewish holiday that month, she takes some time to explain and celebrate it. The population in any seniors' facility fluctuates, and at Spring Hill right now there are few Jewish residents. But Suberman has formed close relationships with a number of the non-Jewish residents who attend her programs, including one who had worked in a synagogue as a non-Jew and wears his kippah when Suberman visits, greeting her affectionately with "Shalom." Suberman's presentations of Jewish practice excite lively interest from her non-Jewish attendees. "I love it when people ask questions about being Jewish," said Suberman.

The History with Judy programs draw between 15 and 25 residents each month, many of them regulars. "We have a good time," said Suberman. "It's fun!"

Suberman's name has come up as a potential Jewish Pavilion honoree a number of times, but she tends to make light of her contributions. She accepted the honor this time when it occurred to her that it would be inspiring for her children to see their mom being honored for her service.

"I keep trying to tell people that I do this for me and that I'm very selfish about it," Suberman laughed, "but nobody wants to believe me."

Co-honoree Susan Bernstein led Shabbat services and holiday programs for the Jewish Pavilion at a number of senior living facilities around town for more than three years before accepting the job of program director for the Pavilion's Longwood, Lake Mary and Sanford programs in late summer. She began her association with the Pavilion when she was congregational life coordinator for Temple Israel, bringing groups of students to a Longwood seniors' residence to sing, tell stories, and sit and talk with the residents.

Bernstein soon began volunteering regularly at other locations, bringing years of experience as a Jewish educator and a wide knowledge of Jewish religion and culture. With a guitar and other instruments in tow, Bernstein leads programs that are fun and engaging-and always educational. The seniors she serves respond to her friendly warmth and sing along with her in prayer and song. Sometimes she hands out small rhythm instruments, welcoming the seniors into her "band."

Bernstein's years as a volunteer were an asset in her transition as a Pavilion program director. "A large part of the duties of program director is similar to those of our volunteers," she said. "Both positions are charged to meet the goals of the Jewish Pavilion's mission: building relationships with Jewish seniors in Central Florida and bringing Jewish programs and celebrating Jewish holidays for those who are unable to attend synagogue services or participate in Jewish life in town."

The Friends of the Jewish Pavilion chose Bernstein as one of the JP Connections honorees several months before she was hired and agreed strongly that her new status did nothing to alter the impact of her time as a volunteer. "I am honored," said Bernstein. "I recognize the importance of having one's efforts appreciated, as I work with so many who give of their time graciously." 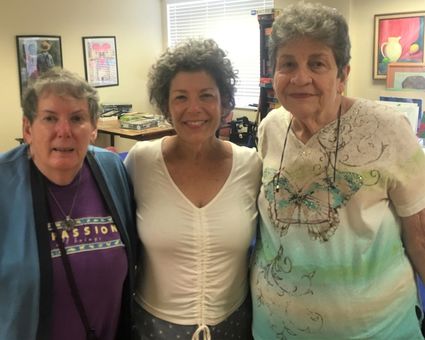 JP Connections will be held at Hilton Orlando North, 350 Northlake Boulevard, Altamonte Springs, on Thursday, Dec. 6, at 11 a.m. The annual event is a fun afternoon of lunch, schmoozing and shopping as vendors sell fabulous gift items just in time for Chanukah and Christmas. Members, volunteers and the wider community are warmly welcomed with a minimum annual membership pledge of $36. The couvert for the luncheon is $28. For more information or to make a reservation, contact the Jewish Pavilion at 407-678-9363 or nancyludin@jewishpavilion.org.