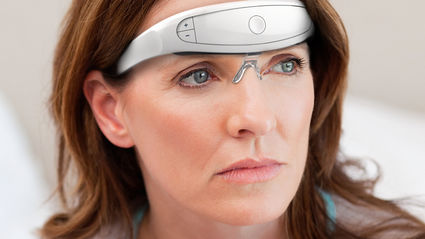 (Israel21c via JNS)-Some 14 percent of American adults suffer from migraines or severe headaches. Among women aged 18 to 44, the number soars to 23 percent. Currently, no cure for migraines exists, and over-the-counter pain relief medicines do not always work.

One of the most promising treatments is occipital nerve stimulation, where a small pulse generator is implanted at the base of the skull to send pain-relieving electrical impulses to the brain.

What if the same effect could be achieved without surgery-and for a lower cost than the tens of thousands of dollars required for an occipital nerve implant? That hypothesis launched Shmuel Shany and Amit Dar on their journey to establishing Neurolief.

Neurolief is developing a noninvasive neuro-modulation device that could be available for purchase in a general pharmacy for less than $500. The device looks a bit like Geordi's visor in Star Trek: The Next Generation, except it sits on top of the head.

The Neurolief neuro-modulator stimulates six different nerve branches in the brain that regulate pain and mood. Each electrode in the device delivers a charge strong enough to penetrate the skull.

"It needs to be done without causing pain to the patient and not causing damage to scalp tissue," Dar told ISRAEL21c.

The device is rechargeable, can be adjusted to a variety of head sizes and connects to both a mobile phone app and the cloud, so that a particular patient's experience can be compared with others to deliver a precise electrical "dose."

By "dose," Dar explains that the device can dial up and down the six electrodes individually, holding out the possibility to create a treatment plan personalized for each patient.

Neuro-modulation prevents the secretion of chemicals in the brain that trigger pain. But it also modulates the "activation threshold" of the neural system, so that the next time a migraine trigger is present (whether that's stress, lack of sleep or even chocolate), the nerves will not react as severely as before. Neuro-modulation is mostly side-effect free.

one study of the product conducted last year demonstrated an average 80 percent reduction in pain symptoms. That's double the rate for implanted devices and far more than a couple of Tylenol can achieve.

"We compete mainly against the strongest painkillers," said Neurolief CEO Shany. "We are not targeting patients whose symptoms are alleviated with Advil, but those who require drugs frequently."

The Neurolief device is meant to be used only during a migraine attack. Since it can fold up to the size of a sunglasses case, it's small enough to carry in a purse or backpack.

Dar and Shany are not newcomers to the field of neuro-modulation. The two started and sold NESS-Neuromuscular Electrical Stimulation Systems, a company that builds neuro-modulation products to help stroke survivors move paralyzed arms and legs.

After NESS's new owners moved most of the company's operations to California, Dar and Shany were free to develop their own non-competing neuro-modulation device.

NESS fetched a price of $75 million in 2007. Netanya-based Neurolief is still at the beginning of its journey and has so far raised $5 million since it was established in 2013. The financing was led by Terra Venture Partners.

Neurolief has developed a novel pricing model. Instead of purchasing the device for a one-time fee, patients will buy it "pre-loaded" with a certain number of treatments (10 to start).

"It's like buying a blister pack of medications," VP of business development and marketing Eran Schenker told ISRAEL21c.

If the device works, a user can "turn on" more neuro-modulation doses remotely via the Internet. "It won't cost more than the pills you already get," noted Schenker.

But don't head to the local pharmacy just yet. Neurolief's product will not be available until sometime next year.

There are still a few trials to complete, including a study with 56 patients now underway. The company hopes to apply for a European Union CE mark by the end of 2018, with application to the FDA for approval in the U.S. to follow.

Next on Neurolief's list is depression. Dar reported "remarkable results" from a clinical trial at a mental hospital in Israel. Neurolief's anti-depression model could come as early as 2020. Neurolief started by targeting migraines because the clinical evidence from implanted devices has already demonstrated that neuro-modulation works. But the same neuro-modulation techniques can be used for other indications.

There are other companies working on brain stimulation to treat depression, mostly using magnets. "But these are large machines that can only be used in a clinic," said Dar. "We wanted something that could be used at home, that allows for self-treatment."

"At the end of the day," said Dar, "we will have a solution for multi-indications, although each needs its own regulatory approval and may need a different device."