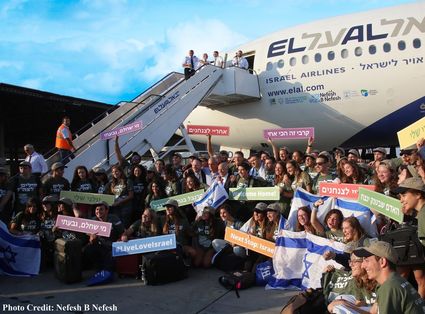 New immigrants arrive in Israel, many coming alone to serve in the nation's military.

(JNS)-You'll laugh. You'll cry. You'll feel what it's like to breathe the air of Israel on a daily basis. You'll also see this tiny sliver of land through the eyes of the 51 olim (new immigrant) bloggers whose experiences Akiva Gersh packed into "Becoming Israeli: The Hysterical, Inspiring and Challenging Sides of Making Aliyah."

Warning: Don't be surprised if you find yourself pulling out your suitcase and throwing in your Naot sandals, the family photos and a year's supply of Ziploc bags. Before you know it, you might even be downloading an aliyah application.

That's because the new book affords a window into the joys (warts and all) of life in modern-day Israel as lived by a new generation of immigrants. Most of them are 30- and 40-somethings who left Dodge at the top of their game, swapping "bright futures" for the struggles of mastering Hebrew, adjusting to a foreign culture and supporting their families.

As promised in the book's subtitle, this 51-voice Greek chorus of newly minted Israelis doesn't shy away from the "challenging" aspects of aliyah. Ariane Mandell shares the grief of her farewell hug with her mother and confesses to the reader: "I wanted to be the picture of the smiling olah, I wanted you to believe that this isn't hard. Or maybe I wanted to believe it isn't hard. But it is hard but I'm doing it anyway because I want to so badly, because I love Israel and I want to be part of it, because it's the right thing to do, and I'm the kind of girl who takes those chances... like all olim do."

Celeste Aronoff, who "used to being able to read and understand all the little clues in my environment that center me in my world," now encounters "the loneliness of not being able to connect through words... I can take a few clumsy steps towards them but then I reach my own limits... my own inability to keep up with the conversation."

And Jen Maidenberg writes that though she's reached the aliyah stage of acceptance, she's also clear that this in no way means "everything is OK here." Instead, she argues that it's a good thing for Anglo olim to work at impacting the local culture, "understanding that long-term cultural change requires much more effort than it takes to complain or blog."

Here, as promised, you also have the "hysterical."

Gila Leibtag-Rose offers some advice to fellow olim struggling to communicate with the natives in Hebrew: When the old-timer begins speaking extremely quickly and appears to expect a reply, Leibtag-Rose recommends this sure-fire response:

"Smile slightly, in a way which can be construed as sympathetic or agreeable (and really those are your only two choices, because let's face it, even if she just expressed admiration for Cruella de Vil or announced her intention to come to work wearing only undies, are you really in a position to debate this? We thought not.)

Raise your eyebrows just a touch to vaguely indicate surprise.

Trust me, after two years, I can assure you this works. Contact me if you would like private lessons."

When it comes to butchering the Hebrew language, writes Gersh in his own blog, "we learn to laugh and get over it. And hope that the next time we have to open our mouth, it won't be so bad. And if it is, we laugh again." Here, Gersh offers up real-life olim saying the darnedest things:

And another well-intentioned immigrant doc instructed a patient not as he intended to give him a deep breath, but actually to give him a big kiss.

Trying to give helpful directions, one oleh, instead of saying to turn at the traffic circle, instructed his hapless victim to urinate at the traffic circle. "Are you sure?" morphed into "Are you a virgin?" And in the heat of a business conference, a friend's immigrant father's intention to say "I recommend this" came out "I fart on this."

But in the midst of all this confusion, there is no shortage of the "inspiring" in these pages.

"It feels like we're all in it together," blogs Ariella Siegel. "Even when we're fighting with each other. We're all participating in this crazy experiment called Israel... and we're all family. Sometimes family can get on your nerves and drive you insane, always sticking their noses into your business, The same goes for Israel," she adds, "like living in a country of Jewish mothers who think they know better than you."

But the challenges have a pay-off, writes Ariella Brach Waldinger: "...a newfound humility which lends itself to greater spiritual inspiration and gratitude, as we learn from our sages that one can only claim his inheritance of Eretz Yisrael when he has been humbled."

It's also helpful for olim to remind themselves, writes Talya Woolf, that "this country is a baby... my father is older than this county: she started with nothing... only 806,000 people and a war that demolished large chunks of cities. She now has over 8 million people living within her borders, an 856 percent growth in less than seven decades, and she's had to grow and expand quickly in order to accommodate everyone, I think this country should be given a break."

For these ex-pats, becoming Israeli is a painstakingly gradual transformation, as Israelis remind them "le'at le'at, slowly slowly." Like a snake shedding old skin and growing new. When told 'no' by an Israeli authority, it is imperative to know that in Israel "no" simply means "not yet," reports Hilary Faverman. "And fresh-baked cookies go a long way from moving 'Not yet' to 'maybe soon,' and finally to 'Okay, just stop stalking us. Bring more cookies.'"

But how can olim know that they've successfully made the leap over a chasm as wide and deep as the ocean that separates these two worlds?

Gersh lists such surefire signs as "you're shocked when you visit Port Authority in New York, and see 50 people standing patiently and happily in an organized line," or "you bring Israeli products with you when you visit the States so your kids will have something to eat. And, best of all, "you start saying (a lot) "Yih'hiye beseder" (Everything will be okay), and fully believe it."

And each image of the land speaks a message. "When I look out over my porch at the western bank of the Jordan River, something my grandfather could only dream of while he lay in the barracks of Auschwitz, I know our future has arrived," writes Rabbi Uri Pilichowski. "When F-16s fly by my porch and dip their wings so close that I can see the Star of David on their tail, I know our future has arrived. Most of all, when I see hundreds of Jewish children skipping through the streets of the Old City on their way to study their first words of Torah, I know that our people's future is here in Israel. New immigrants don't want to be on the sidelines for our people's future, we want to play a part in it."

'You will become part of Jewish history'

That the future is reflected in the face of every Israeli child is a theme that surfaces again and again in these from-the-heart writings. When Romi Sussman's son received his first draft notice, says his mom, "the feelings of pride and anticipation didn't erase the fear, worry and apprehension." And, yet, she realized that her grandfather, a purple-heart World War II vet, was the last person in the family to wear a uniform until the day when his grandson puts on one "that didn't exist when he was fighting the Nazis. A uniform that was just a dream, a 2,000-year-old prayer. And that is now a reality. Our reality."

"Your children will be Jewish, and will have a sense of pride," writes Neil Lazarus. "You will celebrate Jewish holidays and walk streets named after mega-Jews, not saints. You will become part of Jewish history as it unfolds and, as an Israeli, you will be a Jew, not Jewish."

It's a place of modern miracles, writes Israeli politician Dov Lipman. As a teenager demonstrating on Capitol Hill for Soviet Jews, he held a sign demanding the release of Yuli Edelstein. Fast-forward three decades: Lipman is the first American-born member of the Knesset, and Yuli Edelstein is Knesset Speaker. "In these most magnificent of times," Lipman writes, "30 years later, we were reunited in the Jewish state, in the Jewish capital, in the Jewish parliament."

Gersh gives his readers a farewell gift with a collection of "OIIs" ("Only In Israel") experiences. For instance, where else does one local taxi service send out a text on the eve of Yom Kippur, wishing customers an easy fast and asking forgiveness "if we offended you in some way, or God forbid, were late to send a cab." Where else does IKEA have a model kitchen set up with two sinks: one labeled "milk" and one labeled "meat?" And where else do you admire another restaurant-goer's dinner, only to have her bring over a bite for you to try?

As Sarah Tuttle-Singer describes the excitement and wonder of being Israeli: "I am exhilarated. (I am exhausted.) In Israel, I am the journey, not the destination."

And while that sense of exhilaration may get buried in the avalanche of workday pressures, it doesn't take much to unearth it.

"I understand how people who were born and raised in Israel may think that I'm overly emotional and sentimental when I cry each time I hear 'Hatikvah' being sung," writes Yael Eckstein. "Yet I pray that no matter how long I have lived in Israel, my heart never hardens to the magnificent reality experienced here and to the divine blessing being bestowed upon us all each day we are able to call this Holy Land home."

"Becoming Israeli" gives you reason aplenty for keeping that suitcase out and asking yourself "What if?"