Shalala to bring experience working with Israel to Congress 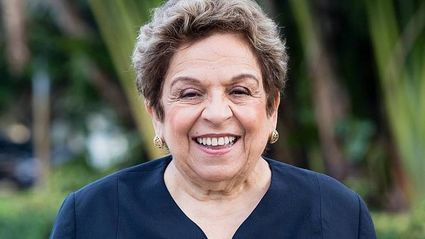 (JNS)-Donna Shalala, 77, is no stranger to politics or the relationship between the United States and Israel. She served as Secretary of Health and Human Services under President Bill Clinton, where she traveled to Israel and helped researchers there obtain grants from the National Institutes of Health, in addition to assisting with other initiatives inside the Jewish state.

She then went into the private sector: serving as University of Miami president for 14 years and president of the Clinton Foundation for two years.

JNS talked with Shalala by phone. The interview has been edited for brevity and clarity.

Q: What is your overall stance on the U.S.-Israel relationship? I know you were briefly detained at Ben-Gurion Airport in 2010 on your way back to the United States.

A: I issued a statement saying that Israel had a right to protect the security of its people. I didn't have any problem with that. My Jewish friends had a bigger problem than I did. They thought it was absurd. The prime minister got up in the Knesset and said, "We got to take a look at our security because Donna Shalala is one of our friends. So it wasn't a big issue as far as I'm concerned.

I've been a friend of Israel for a long time. I've been working with the universities within the health-care system for a long time. I first went to Israel to be on Mayor Teddy Kollek's Jerusalem Committee to help plan the city of Jerusalem when I was a young urbanist, a young academic, teaching at Columbia [University]. And I have honorary degrees from the Technion-Israel Institute of Technology, the University of Haifa and from Ben-Gurion University [of the Negev].

Q: What experiences did you have with Israel when you were HHS Secretary?

A: I actually worked with Israeli health officials to guarantee the Weizmann Institute [of Science] scientists the opportunity to apply for NIH grants among other things. I worked with women leaders in Israel on health-care issues. I went in and out of Israel four times when I was secretary.

Q: Did the scientists get the NIH grants?

A: Absolutely. And to this day, they can apply for NIH grants.

Q: Do you see any commonalities between the health-care system in the United States and in Israel?

A: We've trained a lot of Israeli doctors over the years. They've done fellowships here in the U.S., and American physicians have long gone to Israel and worked with their Israeli counterparts. Most recently, the University of Miami has helped develop the cancer centers in Israel. Our faculty worked closely with their counterparts in Israel, particularly on cancer interests.

Q: And do you see any other similarities between the two nations other than in the health arenas?

A: Certainly in technology. There are lots of relationships in terms of technology. Now those are things I worked on directly myself.

Q: How many times have you been to Israel?

Q: What is your stance on the Iran nuclear deal and overall threat from that regime? You've been in Iran and said it was "an extraordinary experience," and that it has a "very sophisticated culture."

A: I lived and volunteered in Iran in the 1960s. First of all, I think it's a terrorist state. But I do support the Iran deal. I think what it does is it delays the development of a nuclear power by Iran. I did support it and I continue to support it. But it doesn't mean that I'm not shy about recognizing that Iran is a terrorist country and it supports terrorists around the world.

Q: Were you opposed to the Trump administration withdrawing from the deal and reimposing sanctions?

Q: What's your stance on BDS? I know as University of Miami president you said in 2010 that "there will never be a boycott of Israel."

A: I'm absolutely opposed to a boycott of any kind both in terms of disinvestment, as well as in the attacks on Israeli academics by the British Union. I was one of the first college presidents in the country to denounce that.

Q: What's your stance on American taxpayer funding toward the Palestinian Authority?

Q: What is your reaction to fellow incoming Democrats Ilhan Omar, Alexandria Ocasio-Cortez, and Rashida Tlaib, who've made anti-Israel statements?

Q: Do you have any specific plans in Congress regarding the U.S.-Israel relationship, particularly when it comes to introducing relevant legislation)?

A: I intend to work with a coalition of members of Congress, many of whom represent South Florida, like [Democrat Reps.] Ted Deutch and Debbie Wasserman-Schultz, to make sure we continue to make sure that Israel survives and thrives.

Q: Are you aware of the Anti-Semitism Awareness Act?

Q: What's your stance on it?

A: I have not looked at specific bills, but I'll be talking to my colleagues about a list of things I intend to support. Anything that has to do with anti-Semitism you can be sure I'll be front and center.

Q: Anything else our readers should know about you?

A: They should know there's an Arab American with longstanding support of Israel who's just been elected in South Florida.