My cause, my cleats 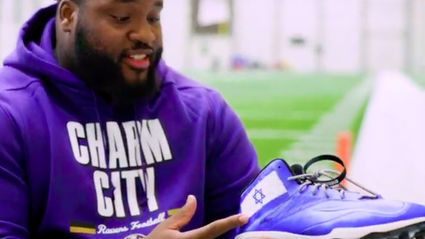 Baltimore Ravens defensive tackle Michael Pierce shows his customized cleats, partnering with the Israel Collective as part of the National Football League's "My Cause, My Cleats" campaign.

(JNS) Baltimore Ravens defensive tackle Michael Pierce chose Christians United for Israel's Israel Collective as his cause for the National Football League's "My Cause, My Cleats" campaign, featuring customized cleats.

The shoes consist of the Israeli flag at the cut length, the initials "IC" at the back" and a skyline of Jerusalem on the sidewalls.

Pierce has traveled to the Holy Land with the CUFI initiative to learn about Israel's past and customs in furthering the relationship between the United States and Israel.

"The message for me is just the oneness and connectedness I feel with that land," said Pierce. "To go over there and see the difference, to see just exactly how the culture is, I went to Shabbat dinner, I just enjoyed their company and learned so many different customs."

He added that "it's definitely something I hope people read about and maybe go over... and to be able to see exactly what's going on."

"That's exactly what we're working to achieve," CUFI founder and chairman Pastor John Hagee said of the Israel Collective. "By bringing role models like Michael to the Holy Land, we've been able to excite young Christians about the vibrant, democratic Israel that was founded on the biblical values we cherish. We appreciate his devotion to the Jewish state and are honored to have him represent the Israel Collective, and Israel itself, next month."

Pierce will wear his Israel Collective-inspired cleats on Dec. 16 when his team hosts the Tampa Bay Buccaneers.