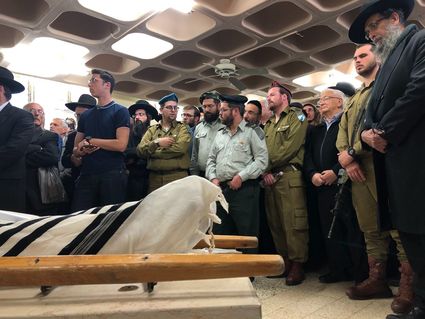 JERUSALEM (JTA)-"Yosef! Yosef!" wailed Rabbi Eliyahu Meirav, calling out the name of his stepson lying covered in a shroud on the marble slab before him. "You were righteous. I didn't want to believe it. Yoåu were all heart, completely pure, a holy and wonderful boy."

As he broke down in tears, the grieving father was joined by the sobs of those in the crowd, which included a mix of Orthodox Jews-haredi and religious Zionist-as well as secular mourners. Many were in uniform, bearing the unit pin of the haredi Orthodox Netzach Yehuda battalion to which Meirav's fallen child belonged.

"You are going to a better place," Meirav continued, breaking down again as he called his son a martyr. "God, it's enough, enough hate and death."

Sgt. Yosef Cohen, 19, was shot to death Thursday along with Staff Sgt. Yovel Mor Yosef when a Palestinian gunman opened fire at a bus stop they were guarding outside the Ofra settlement. Another soldier and a civilian also were wounded in the attack, which was the second to hit the Judean and Samaria community this week. Earlier this week seven people were wounded in an almost identical attack. One of the wounded, a 21-year old newlywed, underwent an emergency cesarean section after the shooting but lost the baby.

Jerusalem and disputed Judea and Samaria have been rocked by violence over the past week, including an alleged car ramming near Ramallah, the stabbing of two police officers in the Old City and the knifing of a soldier at the Beit El settlement.

Cohen's death also brought attention to the Netzach Yehuda battalion, which was formed in 1999 to allow strictly observant, or haredi, youth to serve in the army. Other Orthodox Jews, known as Modern or religious Zionist, have long served in the military, but the battalion accommodates the ritual and study needs of the fervently religious recruits. The Israeli army's Human Resource Division says 2,850 haredi soldiers were recruited in 2016 and 3,100 the next year.

The decision to serve, however, is often met with resistance in the soldiers' insular communities, where young men are expected to study Torah full time and leaders and families fear the secularizing influence of the army. Netanel Friedman, an Israeli-American member of Cohen's company, told JTA that Cohen was a lone soldier, or a soldier classified as serving without family to provide support. Apparently relations between Cohen and his family had been strained, but it is unclear to what degree relations had broken down.

According to media reports, Cohen was living with several other soldiers in Beit Shemesh rather than at home. A significant number of haredi Orthodox young men who enlist face a degree of social ostracism at home and Cohen "represented an entire population that we help," said Jake Flaster of the Lone Soldier Center, an organization that provides social and financial services to Israeli servicemen and servicewomen. "We've been helping Yosef for years."

In media interviews, his stepfather described how Cohen had spent the previous Shabbat at home, telling his family that he was thankful that he could "defend the Jewish people with my body."

Meirav, a former fighter pilot who later became religious and joined the Breslov Hasidic sect, told The Jerusalem Post on Thursday that although he had encouraged his stepson to enlist, telling him that it would "good and appropriate for him," Cohen's mother was against it for personal reasons.

"It is hard for a mother to send her child to the army," he explained.

At his funeral, however, Cohen's family repeatedly praised his service and character. All disagreements appeared forgotten as his mother approached his body and began crying helplessly, unable to hold her son one last time.

The Shamgar Funeral Home in Jerusalem was packed Friday morning as friends and relatives remembered Cohen as a gentle soul always willing to lend a helping hand.

"He was my best friend," Friedman told JTA. "We learned for years together" before enlisting and "it's hard to separate from him. He was funny and social, the best friend in the world. I cried for hours when I heard."

Friedman described how he had spoken with Cohen the day before his death, giving him a hug and telling him he would see him the next day.

"He said 'we'll see.' It's as if he knew. Everything comes from heaven," Friedman said inconsolably.

Yishai, a former Netzach Yehuda serviceman who did not know Cohen, said he came to the funeral because he "thought it was important to connect with these life-changing moments."

That sentiment was shared by Raphi Pollak, an American immigrant who said that he "felt the need to honor [his] sacrifice and the sacrifice of all haredi soldiers who have the courage to join the army" in the face of social pressure.

Cohen "died in the sanctification of God's name," said Shlomo Amar, the chief Sephardic rabbi of Jerusalem. "He died while on watch guarding Jews. You can't understand the level to which a martyr ascends. We cry but we won't break."

Cohen's commander, Matti Shevach, spoke while looking down at the slain soldier's body.

"We will continue to do what you were doing when you fell and defend the nation of Israel," Shevach said. "You are our messenger above. Tell God it's enough."